Ozil at Fenerbahce: A disappointing ‘dream’ – but redemption to come? 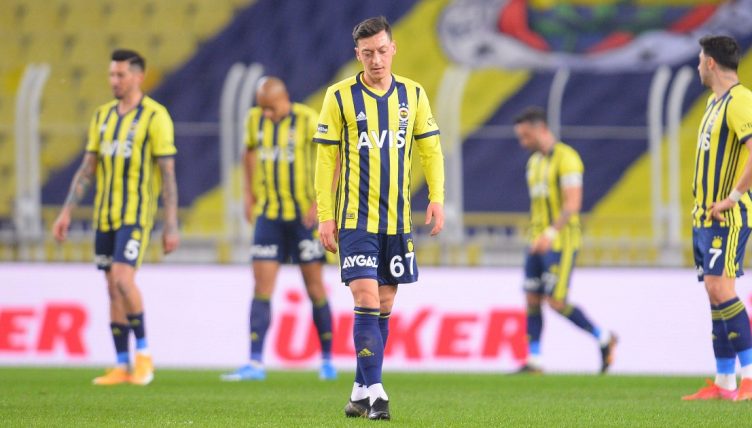 In October 2020, the highest-paid player in Arsenal‘s history, Mesut Ozil, suffered the indignity of being left out of the club’s Premier League squad.

That ruthless decision from the higher-ups at the club proved to be the final nail in the coffin of a seven-year stint at The Emirates that occasionally burned incredibly brightly. Seventy-seven assists in 218 appearances attested that – many of them moments of pure, wonderful invention.

Having featured in every Premier League game under Mikel Arteta since his appointment in December 2019, the pandemic-enforced hiatus then brought a sudden and stark full stop.

Ozil never played for the club behind closed doors, his final appearance was 89 minutes of a hard-fought 1-0 win over West Ham in front of 60,000 at the Emirates shortly before lockdown.

Rather than see out the final six months of his lucrative contract on the sidelines, Ozil took the hint and moved on in January. It was a sad whimper of an end for a three-time FA Cup winner with the club, who had arrived with a reputation as one of the world’s most talented and creative players and often lived up to that hype.

It was moot whether the playmaker was out of form or just out of favour. Either way, that was that.

After a period of negotiations and suggestions of a loan, Ozil’s Arsenal deal was terminated a half-season early, allowing him to move to Turkish giants Fenerbahce in January 2020.

“I am very excited because I was always a fan of Fenerbahce. My dream has come true for me,” he said after arriving. “That’s why I’m very excited to wear the jersey. I hope I will be successful with my team-mates. I hope everything will be fine.”

It had been an up-and-down first half of the campaign for Fenerbahce, with four defeats from their last seven league games of 2020, but by the time Ozil arrived they were flying again: right back in the title race after picking up 19 points from 21 available in January.

That run continued on Ozil’s much-hyped debut, where Fener were protecting a 1-0 lead over Mame Biram Diouf’s Hatayspor.

During his 15-minute cameo, his first senior experience in 11 months, Ozil registered a pre-assist to double his new side’s lead, and they went on to win 2-1, with the three points keeping them top of the table in early February.

In Ozil’s glittering career, he’s only ever won one league title. That was for Jose Mourinho’s Real Madrid in 2011-12, whereby he registered 17 assists for Los Blancos as they scored 121 goals and hit 100 points in La Liga. A second title was always elusive at Arsenal but was suddenly within his sights.

Fenerbahce coach Erol Bulut decided against throwing Ozil in at the deep end in an all-important clash with at home to Galatasaray, once again bringing him off the bench – along with Cisse – shortly after the hour mark, having gone a goal behind in the intercontinental derby.

Ozil was unable to change the game as Fener succumbed to a 1-0 defeat – fortunately, for their sake, with no fans allowed in – which resulted in them dropping from first to third.

From there, they failed to win back-to-back games until the final weekend and fell out of the title picture completely.

Fenerbahce never regained the top spot and eventually had to stomach third place. Bulut was shown his marching orders in mid-March, replaced by ex-midfielder Emre Belozoglu on a caretaker basis until the end of the season. Besiktas were crowned champions, with Galatasaray runners-up.

An ankle injury kept their star signing in and out of the team in the spring, and he was restricted to just 10 Super Lig appearances during that first half-season.

Ozil had failed to make any kind of impact at all. He scored no goals and only managed his first assist on his 10th game. It was a lovely cushioned touch into the path of Cisse, showing he’s not lost that aesthetic ability, but it was only a 93rd-minute consolation goal in a 2-1 defeat to Sivasspor.

The little flourish proved to be Ozil’s final touch of the most difficult year of his career. Here was a player that set up goals every other game at the world’s most famous football club suddenly struggling to stand out in the relative wilderness.

2021-22 has begun with renewed hope that Ozil can become the player Fenerbahce need him to be.

The 32-year-old kicked off the season with his first goal for the club, the match-winner in a 1-0 victory over Adana Demirspor in the Super Lig’s opening weekend.

Putting the finishing touch to a well-worked move straight from the second half’s kick-off, it was clear to see what the goal meant to him – just look at the look of pure elation as he wheeled away to celebrate.

The following week he came off the bench and set up Valencia in an injury-time counter-attack, sealing a 2-0 victory over Antalyaspor, and soon enough notched his second goal for the club with the opener in a 1-1 Europa League draw away to Eintracht Frankfurt.

It hasn’t been entirely plain sailing. He’s only started three of Fenerbahce’s eight league games in 2021-22, while he looked frustrated at Vitor Pereira’s decision to leave him as an unused substitute in a 2-1 win over Kasimpasa, making it clear how he felt when he threw down his bib after the final whistle.

But three goals and one assist in fewer than 500 minutes of football is a respectable enough return, demonstrating that he can be the difference-maker he so often was during his Madrid and Arsenal peak years.

There’s plenty of the race yet to be won, but it’s been an encouraging start for Pereira’s Fenerbahce, who are back top of the Super Lig table after six wins from the opening eight matches.

Ozil has suffered through many months, if not years, to forget, but there’s every chance he can achieve late-career redemption in Istanbul.