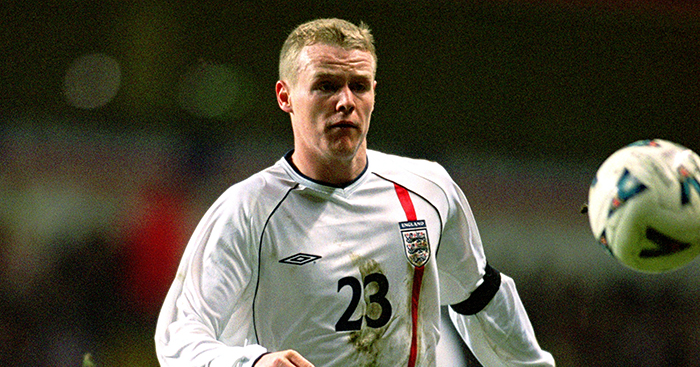 Michael Ball was called up by England on three separate occasions by three different managers, yet he only ever made it onto the pitch once. It is both an honour and a regret for the former Everton and Manchester City man.

Ball’s one and only appearance for England came as a half-time substitute in Sven-Goran Eriksson’s first game in charge against Spain in 2001.

Ball was only 21 at the time, yet it already felt like a belated international debut for the then-Everton left-back, who had progressed through the England youth ranks quickly and had first joined up with the senior squad two years previously.

Chris Powell, the 31-year-old Charlton defender, started the Spain game, becoming the oldest England debutant since Syd Owen in 1954, but with time on his side Ball could have been forgiven for thinking further chances would come down the line.

“My performances for Everton were pretty good and Sven was coming to a lot of our games,” he says. “I was involved in his first squad and early on in the week he said he wanted to see what I was like against top-class opposition.

“We were playing Spain and you’d always like to start the game and get it over and done with, rather than having more time to dwell on it and think how the game’s going to go. I was just waiting and getting myself ready.

“It was 1-0 at half time and Sven made quite a few changes, which he became famous for doing with England. He took quite a few of the bigger players off, like Becks, and some of the younger ones came on. There was myself and Frank Lampard.

“When I came on I got quite a good little early touch. I did a one-two and played a through ball for Michael Owen to have a chance. He was unlucky not to score. That sort of settled my nerves and I really enjoyed the game then. We went on to win 3-0 in the end.

“Afterwards I was obviously pleased and proud. My grandmother had always said I’d play for England so it was great to finally get the cap.

“Although I was only 21, it felt like I’d been trying for years and years. I was still young, but I’d been on the fringes for a while.”

Sadly, it would prove to be Ball’s only experience of playing for England. He was called up on a few more occasions but forced to drop out at Everton and then Rangers, who he joined in the summer of 2001, looking to manage a knee problem that was getting worse. It eventually resulted in him missing 18 months of football.

During a difficult couple of seasons, Ashley Cole and Wayne Bridge emerged as England’s outstanding left-backs, leaving Ball in the shadows. His England shirt from the Spain game serves as a reminder of what he achieved, but also what might have been.

“I got all the players to sign it and Teddy Sheringham wrote, ‘Best wishes and plenty more to come.’ Unfortunately, there weren’t any more to come. He jinxed me on that,” Ball laughs. “But nobody could foresee the injury I’d have not long after that.”

Life as an international

Ball was first called up by Kevin Keegan in April 1999 for a friendly against Hungary in Budapest after Graeme Le Saux had withdrawn from the squad with an injury.

Ball could only watch on from the bench as Phil Neville started at left-back and Michael Gray replaced him late in the second half, but it did at least give him his first taste of what it was like as a senior England international.

His Everton team-mate Francis Jeffers was in that same squad, and he knew others from the England youth setup, but Ball soon noticed that the group was often segregated along club lines. 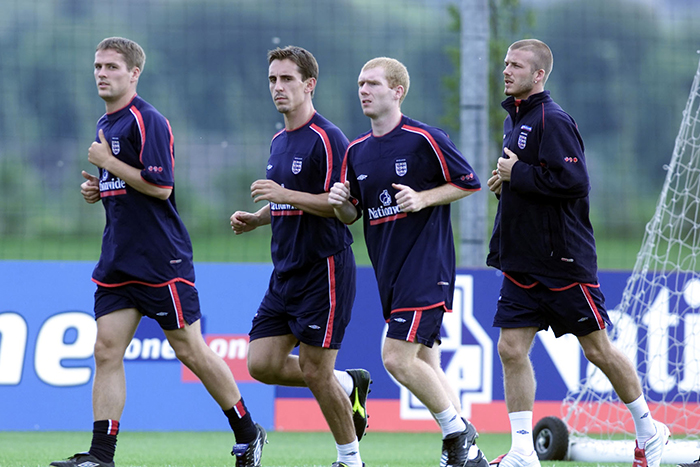 “There were little cliques here and there,” he says.

“I’ll always remember one of the times I turned up to the hotel a bit too early. We had to meet up for lunch and say hello to everybody. I just made my way into the canteen, got a plate of food and sat at a table.

“I was in a world of my own and by the time I looked up I realised I was sat on the Man United table. There was David Beckham, Gary and Phil Neville, Paul Scholes. They were all giving me a bit of stick because I was a Scouser on the Mancs’ table.

“I turned around and saw there was Michael Owen, Robbie Fowler and Jamie Carragher on a different table. I realised I’d messed up there, but they made me feel welcome. It was a nice bit of funny banter to set the tone.”

However, while there were enjoyable moments of humour and light relief, the level of press attention that players were subjected to on England duty could be stifling.

“The hype around the England setup wasn’t too nice,” says Ball. “The lads knew we had to behave and stay away from anything controversial.

“When you’ve got players like David Beckham, the media are always trying to find something. The history of the England team didn’t help either. 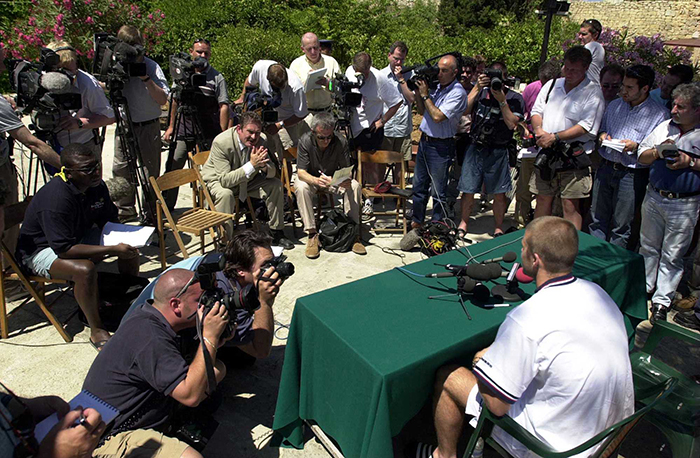 “We were kept in house a lot of the time. We weren’t allowed to leave the hotel or use our own phones. We got given new phones to use while we were away with England so they could keep track of what we were all doing. It felt like you were in a boarding school.

“They were things that they had to do to protect the players, but sometimes you felt a bit henpecked.

“One moment you’re being told to be a man, and the next you’re being treated like children. They felt they had to do that to keep the players concentrated and in check.”

In awe of Beckham

Ball’s second call-up came in November 2000. Peter Taylor had briefly taken over as caretaker manager following Keegan’s resignation, and he named a young and experimental squad for a friendly with Italy, with Ball on the bench again.

England lost that game 1-0, but it marked a change in direction as some of the old guard were moved on and David Beckham was chosen to captain his country for the first time.

Ball remembers being in awe of the midfielder’s set-pieces during training sessions.

“In a way I thought he was pretty easy to defend against because he’d never really run at you. But what made it difficult was that he’d go very close to Gary Neville, pick the ball up and ping a 50-yard ball right onto someone’s head.

“So he was difficult to stop even though he wouldn’t try to do one-on-ones with you. 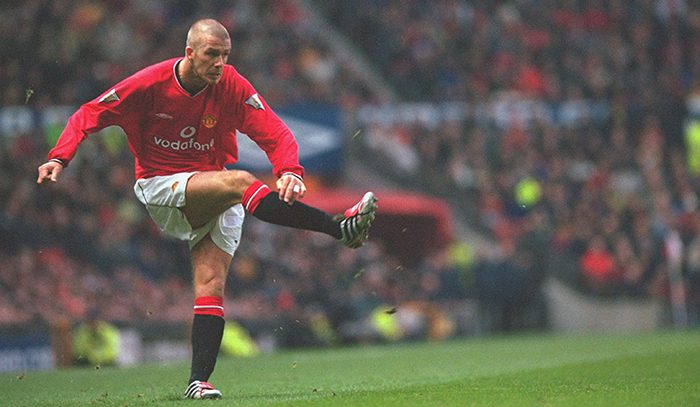 “When he was taking corners in training he was whipping them in with his sidefoot. The pace and the power he was getting on the ball was frightening to see.

“You’d see it on TV or in a game but not really take it all in. Seeing him whip in that many in a row made you realise how dangerous they were.

“When we had to change around and be the attacking team, we were all looking around and wondering who was going to put the balls in. There weren’t many putting their hands up to go after Becks because you’re going to look daft. He was just a different level.”

Ball had thought he would get his chance that night against Italy, but as it turned out he had to wait a little longer.

“I really thought I was going to get my chance, I was pretty confident of my ability,” he says.

“During that game I got asked to warm up a couple of times. In Italy back then you had to warm up behind your goal rather than down the side of the pitch like in the Premier League.

“Ray Clemence, the goalkeeping coach, was in charge of sending the boys out to warm up and then calling them back in.

“I saw him jogging down the sideline shouting my name. I just pretended I didn’t hear him and carried on doing my stretches. I took a deep breath and thought, ‘Right, Michael, here’s your time.’

“As Ray got a little bit closer and was shouting a little bit louder I looked up. He asked me to go and get Jamie Carragher! That was the closest I got,” he laughs. “I had to wait again.”

Sadly for Ball, it was a long way from being the last ‘what if’ moment of his career.