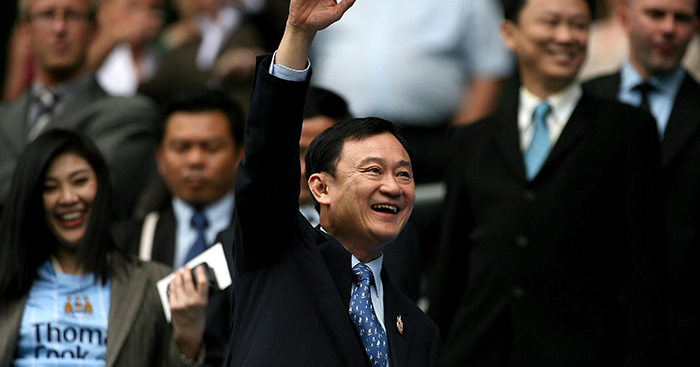 Manchester City have become world leaders on and off the pitch under the ownership of Sheikh Mansour – but things were very different prior to his arrival, not least in their season with Thaksin Shinawatra in charge.

City have won four Premier League titles, two FA Cups and four League Cups since Mansour took control of the club, while the Etihad Stadium has been expanded and a training complex built to rival the best in the world.

Prior to that, however, there always seemed to be a false dawn or disaster just around the corner – and that was certainly the case in the final season prior to Mansour’s arrival.

Thaksin Shinawatra had taken over the club in 2007 citing similar ambitions to his successor as City chairman – our “modest ambitions don’t end with domination of the world game” he famously said – but his 15-month reign ended with him having £800million assets frozen in Thailand amid allegations of corruption, and the club forced to take out a £30million bank loan and allegedly trying to sell players behind the back of the new manager, Mark Hughes.

The previous one, Sven-Göran Eriksson, had been sacked on the final day of a post-season tour to Thailand after a second half to the season in which City’s form tailed off to the extent that Shinawatra was ignoring Eriksson when he requested meetings to plan for the summer and beyond.

The campaign finished with an 8-1 defeat at Middlesbrough, but it arguably could have been even more embarrassing – Eriksson told us he had to convince the players to play at all that day – and Michael Ball says the strange goings-on had begun well before a ball had even been kicked.

Speaking on the latest episode of The Broken Metatarsal podcast, Ball says: “We turned up for pre-season, the owners were on board, and it was exciting.

“Sven came in the first week of pre-season and had a little interview with us all, but it wasn’t all signed and sealed then.

“It was very strange because you see Sven around the training ground and just presume he’d signed.

“We still didn’t believe it was going to happen.

“But Sven was always an honest man so I think he just wanted to speak to the players, get to know them, and show the willingness to the owners that he wanted to be part of Manchester City.

“He spoke about what the owners wanted from the football club, how they wanted to build the club as a brand, not just in the UK but all over the world.

“They had a fantastic vision. Whether that was all words or not…at the time you’ve just got to believe what they say and put a bit of trust in them.”

Ball might have assumed the arrival of Eriksson would be good news for him having previously been capped by England under the Swede, but alarm bells started to ring in his first one-on-one meeting with the new boss.

“I’d only signed for Manchester City in the January and I was having contract talks to extend my stay, then all of a sudden the changes happen,” Ball says.

“He looked at my stats and said I’ve only played x amount of games, it’s not good enough. I said, ‘well I only signed in January’ and he said, ‘OK, fair enough’.

“Sven was very kind to the players who were there, but he was very honest. He said you’re very good footballers to be part of this club, but my ambition is to climb up that league and win silverware and get into Europe.

“If I become your manager this is what I expect from you, to be honest and give everything you’ve got me, but I will be bringing players in to replace you or give you competition in every area of the pitch.”

Ball was one of the existing players who fought off that competition, making 35 appearances in all competitions in Erikson’s one season, but City certainly did not try to hide the fact that they were looking to bring in more players during pre-season.

“It was wild,” Ball says of the club’s transfer policy that summer.

“We spent a lot of time in the canteen at the old training ground. That was our relaxing time after lunch.

“It was always the same old faces, then all of a sudden within a week there are players turning up with two or three agents, then there’s the Thai owners, the Thai owners’ bodyguards, the driver, the mums, the dads…there was a lot of people there and you didn’t know if you could say what you wanted to say or if anything was going to get leaked out.

“Some agents who I knew locally were bringing players in and they were all sitting around the canteen. Normally at a football club that’s a closed part of the training ground, it’s for the players only, but it was such a busy time of convincing players to come and treating them well that every man and their dog were sitting around.

And that approach was certainly not the only way in which the new owners differed from the norm.

“They even bought their own massage people in,” Ball says. “Maybe they shouldn’t have come halfway through the team meeting to tell us!

“We’re having a video conference and the wife came in and explained we’ve got a few more masseurs if anyone wants a massage. The kitman was the first one to put his hand up.

“Maybe another manager might have said there’s a line here that you don’t cross, but Sven understood that it’s their money and understood their way of life and let them do what they wanted, but it wasn’t as professional.

“Sometimes the chairman came down to do a team talk.

“I think a lot of the players were down and doing that thing you do in the classroom – looking up to see if anyone’s laughing. It was just a strange thing and Sven just took a back step and let him do what he wanted.

“We left the changing room and looked at each other, shrugged and said ‘what was that all about?”

“I think Sven knew there wasn’t much he could have done.

“They were things that I’ve never witnessed before, but it was all part of the madness at the time.

“When you’re winning it’s good, but when it started to go a bit pear-shaped it was difficult.”

Listen to the full episode of The Broken Metatarsal below, with The Last Leg’s Alex Brooker joining Rich, Mark and Pete to remember what was a truly crazy season for City.