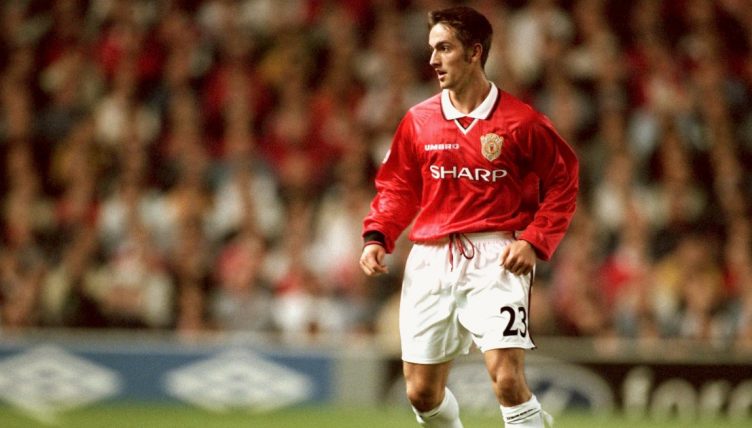 A sliding doors moment may have opened just enough to give Michael Clegg a long and successful career at Manchester United – but it wasn’t meant to be.

The former right-back so nearly scored the winner for the Red Devils after coming on as a substitute in the second leg of their Champions League quarter-final clash with Monaco in 1998.

But in space, and with only goalkeeper Fabien Barthez to beat, Clegg, who had replaced Paul Scholes in the 31st minute, fizzed the ball over the crossbar. The game ended 1-1 at Old Trafford, and United went out on away goals.

Still, on the surface, things were looking good for Clegg, who had made a handful of Premier League appearances by this point and had been persuaded to sign a long-term deal by Sir Alex Ferguson.

Personally, however, he was struggling with mental health issues which eventually led to his retirement as a player at the age of just 26.

“Fergie offered me a four-year contract, but I had agents knocking on my door, which he did not approve of,” says Clegg, who left Sunderland at the end of 2017-18 after 12 years as head of strength and conditioning.

“I should have moved away at the time to get my career going, and I actually earned more money as a coach at Sunderland than I did as a player at United. Never having an agent meant I probably missed out on millions, but I maintained my self-respect.

“Wes Brown was younger than me but was on more than me and his emergence meant the writing was on the wall. I went on loan to Ipswich and Wigan, but the belief I had in myself wasn’t there anymore – the eye of the tiger was missing.”

These days he is back at the club as a regular on MUTV, the club’s in-house channel, working as a matchday pundit for Under-23s games, but he has also been invited to the club’s training complex at Carrington by his former team-mate and current United manager Ole Gunnar Solskjaer.

Looking forward to hearing the insights of our very own Michael Clegg tonight on #MUTV at tonight's #u23 @ManUtd #MUAcademy Good luck! #MUFC pic.twitter.com/Q5jD6qI1xJ

The Norwegian has also been quick to involve Clegg’s dad, Mike, who spent 11 years as a power conditioning coach at Old Trafford.

“One of the first things Ole did when he was named caretaker manager was visit my dad at his gym, where they spent an hour reminiscing and discussing best practice,” Clegg says.

“Ole is a great guy, but he had a tough streak as a player and I know he does as a manager. Bringing in Mike Phelan with him was a masterstroke and he is getting all the right things in place.

“It is not going to be easy and United aren’t suddenly going to start winning the Premier League and the Champions League, but they will do it eventually under Ole, I have no doubts about it.” 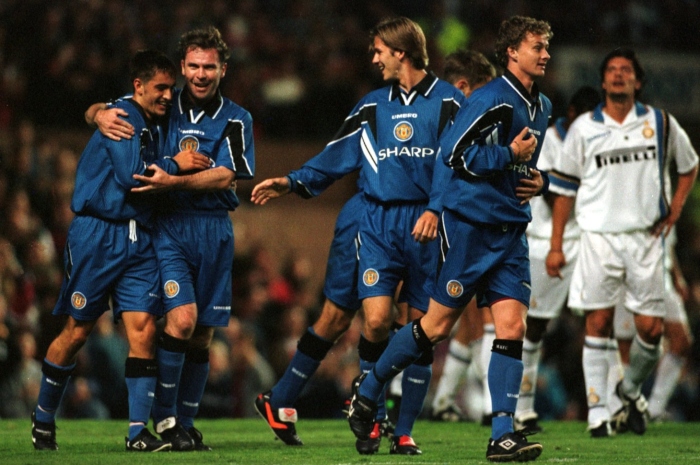 Growing up in the Ashton area of Manchester in a mixed United and City-supporting family, Clegg was spotted by United scout Brian Poole and signed a youth training scheme contract in July 1993.

He worked under coaches Dave Bushell, Nobby Stiles, Jim Ryan and Eric Harrison, playing mainly as a centre-half, despite standing only 5ft 7in.

Somewhat unusually, Clegg trained regularly in his father’s gym – once missing a youth game at United to take part in the British Weight Lifting Championship – and always did extra weights at The Cliff, United’s former training ground.

“I was athletic and powerful, but not very good at football at that time,” he says.

Offers of a scholarship from four American universities were on the table, too, which he gave serious thought to accepting, and led to him knocking on the formidable Ferguson’s office door.

“He offered me a one-year contract and asked me what I would like to happen,” Clegg recalls. “I said I want the opportunity to play as a right-back, which he promised me, even though there were good players ahead of me, like John O’Kane and Chris Casper, but I still signed the contract.”

Eventually, Clegg was given his debut away at Middlesbrough in November 1996.

“The first team had about five or six out injured and Scholesy told me that I might be involved at the weekend, and (assistant manager) Brian Kidd told me to go and get a suit fitted.

“I ended up travelling with the first-team squad and we stayed at an old castle in County Durham. Everyone was really welcoming, and Roy Keane and Andy Cole were great with me.

“I wasn’t confident at all that I could play in the Premier League and I just thought I’d be watching the game from the stands, but when I went into the changing room, my shirt was hung up next to Peter Schmeichel’s. My heart sank, but it also exploded. I was scared and excited at the same time.

“The next thing I knew, I felt a hand on my shoulder and when I turned round it was Sir Bobby Charlton. He wished me congratulations at making my debut for Manchester United and just told me to go out and enjoy myself.

“That put my nerves at ease because I knew everyone wanted me to do well.”

He remained in and around the first-team squad, regularly training with them, and made his home debut in a 2-1 win against Wimbledon in January 1997, appearing twice for United in the league that season. 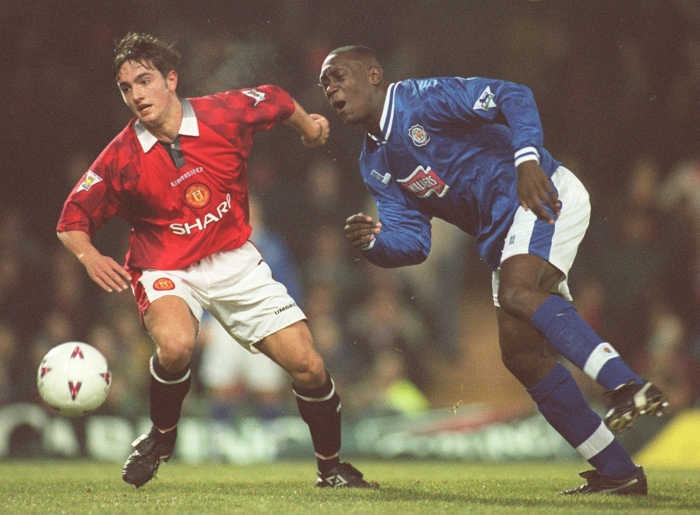 “There was nothing better than playing for Manchester United,” Clegg says. “What the manager instilled at the club was amazing and there was a culture of best practice at every level.

“Eric Cantona set the stall out when it came to training – he would stay for hours afterwards practising, which encouraged players like David Beckham, Gary and Phil Neville, and Paul Scholes to do the same.”

A couple of further outings followed in subsequent campaigns, but with Gary Neville a mainstay at right-back, he knew his time was coming to an end, and in 2002, after spending time on loan at Ipswich Town and Wigan Athletic, he joined Oldham Athletic.

But he stayed for only two years before deciding to quit the game.

Clegg says: “I probably outstayed my welcome at United to a degree. I needed to leave.

“My first cousin, David, who was a big United fan, committed suicide when he was 19 and at the funeral everyone was wearing United shirts with ’19, Clegg’ on the back.

“Because 19 was also my squad number at United, it really set me back emotionally. I was mentally at a bad stage, but I never sought help. The stress got so bad that I developed psoriasis on my hands.

“I then had to have a cancerous growth removed from my ear and had to go back every few months to check if the cancer had spread.

“Mick Wadsworth took me to Oldham and I did OK, but he was sacked and Iain Dowie came in. I dropped out of the first-team picture and knew something was wrong with me – I felt lost as a human being.

“I remember lying in the bath at the training ground, staring at the ceiling. The groundsman came in and asked if I was alright because he had been watching and worrying about me for months and thought I might do something to myself.” 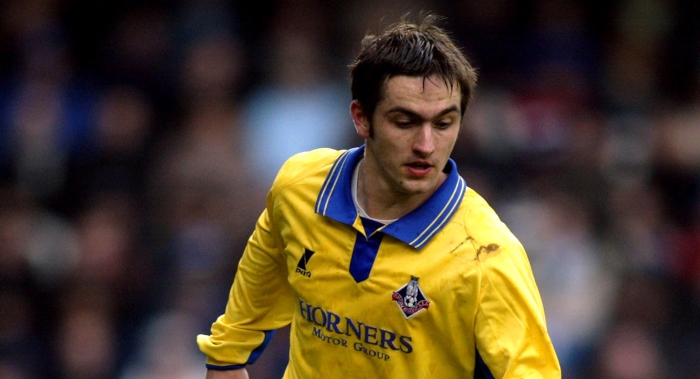 Clegg felt Brian Talbot, Dowie’s successor, wanted him out, and he left Oldham, and football, or so he thought, for good. He went to work in his father’s gym training clients, which helped him feel more positive about himself.

A few years later, he received a call from Roy Keane, who had taken over as manager at Sunderland and wanted to take him to the north-east club as their head strength and conditioning coach.

Clegg’s father had worked closely with Keane after the Irish midfielder had snapped his cruciate ligament in 1997.

“I didn’t even know Roy had retired because I had stepped away from football,” Clegg says.

“He wanted to take the United DNA to Sunderland, so he also took Raimond van der Gouw as goalkeeping coach, Neil Bailey and Ricky Sbragia as coaches and Mick Brown as chief scout.

“People see the stern and aggressive Roy Keane, but when you are in his inner circle you see what a brilliant person he is. When we were promoted to the Premier League, he sent 15 of his staff to Monaco for four days.

“He was big into team bonding, as well, taking us cycling and clay pigeon shooting.”

Keane quit in 2008, but Clegg stayed on at Sunderland for another 10 years, working with a plethora of managers, including Steve Bruce, Martin O’Neill, Paolo Di Canio, Dick Advocaat, Sam Allardyce and David Moyes.

The father-of-two, who is married to a Mackem and still lives in the city, was on his honeymoon in Singapore at the end of the 2017-18 season when he received a phone call telling him he had been relieved of his duties.

“It was something I had kind of expected because the club had just been taken over and I was ready for a new challenge, but I wished they had done it face to face,” Clegg says.

Now, Clegg is following his passions as an accredited coach at the Elite Performance Institute and the founder and online training coach for Seed of Speed, a specialist programme designed to help and train elite athletes around the world.

A holder of a Master’s degree in strength and conditioning, he is also a UEFA B-Licensed coach and regularly goes into schools to teach coaching, but he remains concerned about the mental fragility of young footballers.

“What most people don’t know is that the average age for a player to retire from the professional game is 20,” he says.

“These kids start playing at academies at six and seven and they are footballers in their minds, so when they are released by their clubs 12 years later, it is extremely difficult for them – where do they go from there after all those expectations?

“It is a mental health time bomb ready to go off, which I know that the education officers at United, for example, are aware of.

“There is no problem giving opportunities to young boys, but you have to mentally prepare them because football is a big bubble, and that has to be sorted.”

This interview was originally published in April 2019.