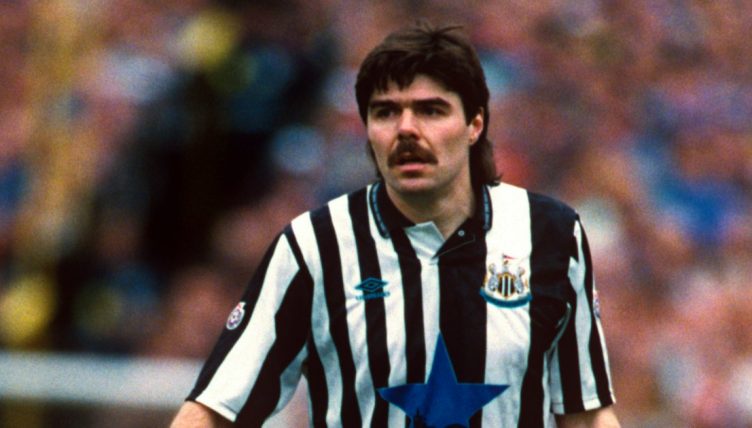 In 1989, Micky Quinn was ready for a move. He was in his late 20s and at the peak of his powers. When Newcastle United came calling, then, the decision was instant: it was exactly the sort of transfer he’d dreamt of.

Quinn had been at Portsmouth for three seasons, the first of which had been a glittering success.

He’d scored the goals that took Pompey back into the First Division in 1987 and the club’s fans would serenade with chants of, “He’s fat, he’s round, he’s worth a million pounds.”

But Pompey had been relegated from the top flight in their first season back and if not for Quinn’s goals in 1988-89, they may well have suffered the ignominy of a double drop.

Pastures new beckoned. Newcastle had just been relegated and Jim Smith, then manager, needed a new striker to fire his side back up. Quinn was the perfect man for the job.

He would go on to have the season of his life in his first campaign at St James’ Park – and break a hex that hung over the club’s famous No.9 shirt.

Yet that season would end in tears and, from there, Quinn was in and out with injury and struggled to replicate the form he’d shown in his first season.

When Kevin Keegan arrived in 1992, it was the start of the end of his time in the North East.

But Quinn looks back on his Newcastle days fondly, even that unstable period at the end when Keegan was starting to build his kingdom.

Here, the big centre-forward spoke to us on behalf of BETDAQ and told us all about his years on Tyneside and the deep connection he shared with the Geordie nation.

Planet Football: Why did you decide to join Newcastle in 1989? Were there First Division clubs interested in you at the time?

Micky Quinn: You always learn afterwards there were a few clubs interested in you, but at the time Newcastle United were a massive club, ]they had] just been relegated.

That was the downer for me that they were in the division that I was playing in at the time.

But Jim Smith rang me up and he said that he wants to build a team in the summer for the following season to get straight out of the division and back into the big league again. So I decided to join them.

They [had] just lost Mirandinha – their Brazilian striker who the fans loved. And apparently, I was the 23rd choice striker that summer!

I remember getting to St James’ and Jim said, ‘What shirt do you want to wear?’ I said ‘There’s only one shirt you wear here Jim – the No.9 shirt.’ Legends like Hughie Gallacher, Jackie Milburn, Malcolm Macdonald [had worn it before].

Long story short, I made my debut against Leeds United, who spent a few quid that summer trying to get out of the division. They had the likes of Gordon Strachan, young David Batty playing for them – a good team.

I wanted the adulation of scoring goals and Newcastle gave me that platform and with that No.9. It was hero status. I got the golden boot at end of that year; I think I got 32 league goals [ed.: it was actually 34].

I think me and that No.9 shirt just went hand in hand.

PF: How were you able to bed in so quickly and find the goalscoring form that you did?

MQ: Well, there’s a bit of pressure like I say wearing that shirt, but once I got that first goal at the Gallowgate End, a penalty, all that pressure was off then.

I thought, ‘Right, you are going to see something now.’

Then after that penalty, I got another three. I think I scored in my first five consecutive games. And with the adulation of those fans behind me, the confidence…

I could always score goals. I was the leading goal scorer at every club I’d been to, so I knew I could score goals in that division as well.

But it went up a level with the adulation and the headlines and Newcastle being a massive club with a massive following. So almost every time I put that No.9 shirt on I had the self-belief to go out and score goals, and I did.

PF: Newcastle just missed out on automatic promotion. Did that affect you mentally going into the playoffs? Was it difficult to go again for the Sunderland game?

MQ: Mentally, going into any derby game you know you just don’t want to let the fans down, so the pressure is always on.

The first leg we played at Roker Park, 12 o’clock kick-off on a Sunday. The Roker Roar was deafening. You could hear it back on Tyneside, it was that loud.

We got a great result; they missed a penalty late doors, we drew 0-0. It was always going to be a tight game back at St James’ Park.

I remember Mark McGhee, my strike partner, took a shot, it hit the inside of the post and rolled into the keepers’ arms instead of rolling over the line, and then two minutes after that they broke away and scored.

Whoever scored that first goal I think was going to go on and win the game, because the other team were going to chase the game, and we ended up getting beat 2-0.

From soaring high with all the goals I’d had that season, my wings were clipped, and I quickly came back down to earth. It was one of the lowest points in my career.

PF: Ossie Ardiles replaced Jim Smith the following season. What changes did he make? What effect did that have on the players?

MQ: Well, when Ossie Ardiles came in he just changed everything.

He let go of most of the experienced players and he was responsible for bringing in the likes of Lee Clarke, Steve Howey, Steve Watson and Robbie Elliott – all these local lads that had burst into the first team.

The thing for Ossie was the mentality he brought to the club. He brought a pass-and-move, one-touch football that [meant it] was absolutely a joy to train on a day-to-day basis. He made me club captain as well. 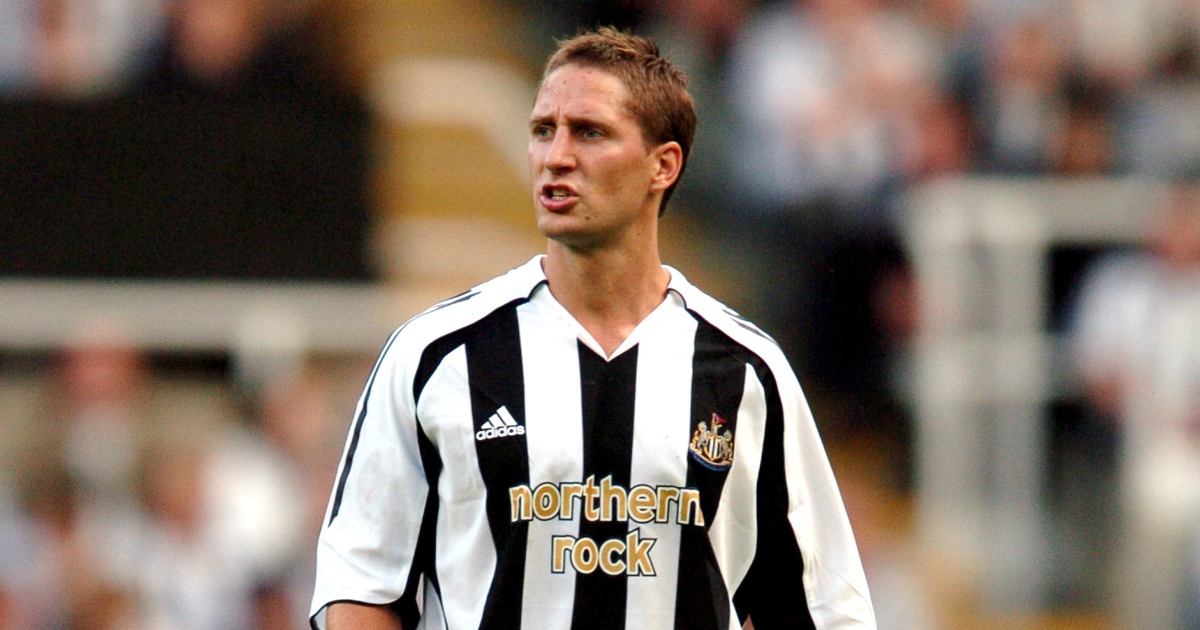 READ: Robbie Elliott: ‘Asprilla lost a deposit due to bullet holes in the walls’

On a game-to-game basis, we were scoring goals but we conceded goals [too]. I remember Tranmere 6-6 Newcastle in the Zenith Data Cup – mad! Six goals away from home! I think we got beat on penalties in the end.

We weren’t winning many games and sadly the chairman pressed the panic button. Ossie was only there three months and he sacked him. And in came Special K – Kevin Keegan. He was back at Newcastle, this time as a manager.

PF: How did Keegan’s arrival affect you?

MQ: Kevin was my hero as a kid, being a Liverpool supporter growing up in the late 70s. I met him previously through Mick Channon and Alan Ball – he seemed a nice guy.

When he came to the club and replaced Ossie Ardiles, I was injured, the was team struggling and it was Kevin’s first job. He was struggling.

The following season, pre-season, we had a little talk and he said we were going for promotion. So I went out of his office in the summer [feeling] 10 feet tall. Then I found myself on the bench for the first game of the new season.

Kevin didn’t like opinion – you know, discussing teams, or showing your opinion in regard to what was going on with the team. He liked to do everything himself and make his own choices.

On four different occasions, I broke into the team, scored the winning goals, and he dropped me after every game. I just knew then that my days were numbered. Whatever I did I was never going to be a regular again.

Coventry were in the new Premier League then and wanted me, so I went there on a month’s loan and smashed it – scoring goals left, right and centre, in the big league.

I’d flirted with the big league once before with Portsmouth when we got promoted to Division 1, but sadly we were relegated the following season. But [with Coventry] I arrived in the Premier League scoring goals and that was where I wanted to be.

I’ve seen Kevin on a number of occasions [since then] – it’s fine now. If you’re a professional footballer it’s a job, it’s like any job, and you have to work with the boss – or the manager if you’re a footballer.

For some reason, Kevin obviously thought I didn’t have a future at Newcastle, which broke my heart because I love the Geordies and I loved playing at Newcastle.

The one thing I was gutted about was that I never had a chance to say goodbye to the fans or goodbye to my team-mates because it all happened that quickly.

Literally, one hour I’m in his office and an hour later I was down the road to Coventry. But I’ve made peace with that.

I still go to Newcastle every year; seven or eight speaking gigs, and I’m going to some games now. So it’s still fantastic to go up there because they treat you like you’re still a player there, if you’ve done well for them that is.

Micky Quinn was speaking to Planet Football on behalf of BETDAQ.