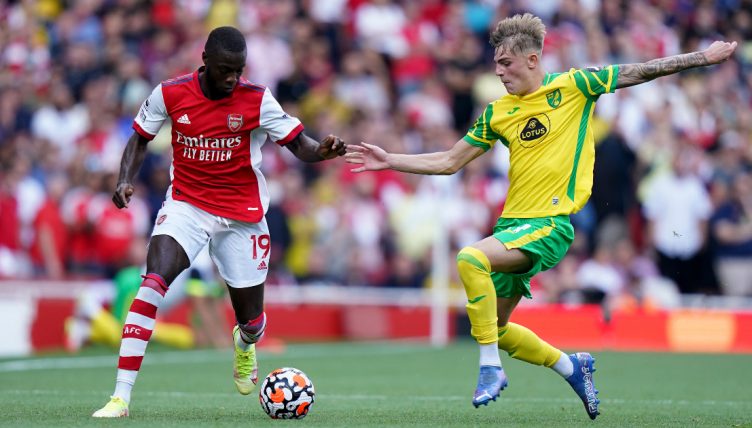 When Arsenal agreed a deal to sign Nicolas Pepe from Lille for £72million in the summer of 2019, there was considerable excitement.

Landing the Ivorian winger was seen as something of a coup, given his record in Ligue 1 and the apparent interest shown towards him from Liverpool, Napoli, Bayern Munich and others across Europe.

Under Unai Emery, the Gunners finished fifth and were humiliated in the 2019 Europa League final by Chelsea, and there was a creative void within the squad, especially on the wings.

Alex Iwobi and Henrikh Mkhitaryan were later sold that summer, with neither consistently impressing at any point in the season, and there was a serious lack of goals from the midfield.

A creative winger who could also score goals was therefore a priority in the summer window, and on the face of it, Pepe seemed like the perfect target.

Scoring 22, assisting 11 and appearing in every single league game as Lille finished 2nd, Pepe was one of the hottest attackers in Europe, with his salute goal celebration already becoming something of an icon.

One goal, in particular, highlighted what Pepe was capable of and it came in a stunning 5-1 win over Thomas Tuchel’s Paris Saint-Germain.

The Ivorian’s sheer pace allowed him to find space in behind, and he coolly slotted it away. Pepe finished the game with that goal and two assists, as the player of the match, and put himself well and truly on the map.

Nicolas Pepe has been linked with the club for quite some time, and Sunday's goal will make PSG wish they bought him sooner…😎 pic.twitter.com/vh9QnZL6e8

What has gone wrong at Arsenal?

The early impressions of Pepe at Arsenal amongst fans were that he was undeniably talented, but could take some time to adapt to the Premier League.

His home debut, which came in a 45-minute substitute appearance in a 2-1 win against Burnley, was impressive, as he created multiple chances for his teammates, and even showcased some of his skill.

In the following game, against Liverpool at Anfield, Pepe made his first start, but in a front two with Pierre Emerick-Aubameyang as Unai Emery deployed a rare diamond midfield with split strikers.

This seemed to work perfectly for the new signing, as he was able to focus his play down the middle, and his ability in one-v-one situations caused nightmares for Virgil van Dijk and Andy Robertson.

Pepe fashioned out a few opportunities for himself, but could not finish, as Arsenal fell to a 3-1 defeat, but his performance was an exciting one, as he provided an attacking threat rarely seen from Arsenal in big away games.

Pepe up against Robertson again 😍 pic.twitter.com/KtQHe0d0wd

Looking at this clip now, it’s almost unbelievable to think this is the same player as the one currently struggling to nail down a place in the starting XI.

This season, Pepe’s technical ability has been seriously questioned, but his time at Lille and even his early form at Arsenal shows that his problems lie in confidence, not skill.

He is often dispossessed too easily, his first touch can be heavy and his once-lethal finishing ability has not been seen this season at all. At 26 years of age, he should be coming into his prime, but he is currently playing with the assurance and discipline of an academy player making his debut.

What caused this decline?

A key thing to note from Pepe’s best season at Lille is that he started 37 out of 38 league games, only being substituted on in the final game of the season, and in the vast majority of these games, he would play 80 minutes or more.

This is in stark contrast to the way he is used at Arsenal: last season 13 of his 29 league appearances came from the bench, and he was substituted off in seven of his 16 league starts.

The 26-year-old never started more than four consecutive league games, often finding himself benched even when starting to build some form.

In spite of these sporadic minutes, Pepe still ended the season as his team’s top goal contributor, with 21 goals and assists in all competitions. This included five goals in his last three league starts, which led to some optimism that he was settled and ready to find some consistency.

“Individually he wants to work and he wants to be the best. When that happens and he has the talent that he has, I think it’s a really good mixture.”

However, whilst it is obvious to point to the change in his playing time as a simple reason for this decline, it not only does not explain the difference in his ability on the ball, but time on the bench may not have been totally unjustified.

At the top level of football, even the flashiest of attacking players need to be well rounded and earn their place in the team. On the right-wing last season, the performances of Bukayo Saka were so sublime that Pepe simply did not deserve to start instead of him.

Some would be quick to point out that whilst Pepe did not deserve to start ahead of Saka, he still warranted a place in the team considering the injury problems suffered by Gabriel Martinelli and the poor form of Willian and even Aubameyang at times.

Willian also started 16 games in the league across the attack, and with just one league goal to show for it, there was nothing to suggest that he would offer more than Pepe.

Would a change of position help?

Pepe played the vast majority of his games at Lille on the right-wing and continued this in England, but the difference in style between the two teams means that these are effectively two different roles.

A lot of his chances in France came by using his speed to run onto through balls to open up one on one situations beyond the last defender.

In his final season at Lille, he received an average of 9.19 progressive passes per 90 minutes, highlighting how he would receive the ball further up the pitch, and this is a substantially higher figure than the 7.04 he has received this season.

His signature move, picking the ball up on the right, cutting inside on his left foot and shooting, is suited to the right-hand side of the pitch, and there have been glimpses of just how lethal this move can be at Arsenal.

However, a right-wing role under Mikel Arteta requires a different skillset. When Arsenal are in possession, the right full-back tucks into midfield, with the right-winger hugging the touchline.

With Pepe forced wide, he lacks the necessary space to run in behind or shift the ball onto his left foot, and is often crowded out which leads to him losing the ball and becoming isolated.

His dribble success rate at Lille was 60.2%, a figure on par with Sadio Mane last season (59.2%). However, this took a sharp decline following his move to north London, with a meagre 39.7% last campaign.

Pepe did start a number of matches on the left wing last season, and this saw some of his best performances for the club. He scored two goals in just three league starts on the left, and a key difference on the left is how the fullbacks operate.

Kieran Tierney or Nuno Tavares have licence to push forward and overlap the winger on the left-hand side, meaning that when Pepe is on the left he is able to dribble more centrally, with an additional passing option out wide.

Should he return to the side?

Arsenal are currently 19th in the league for open play goals, and despite being solid defensively, have struggled to dominate games this season. Bukayo Saka is the best young talent the club has brought through in years, but may be suffering from burnout as he plays in every game.

His form has been stuttering as a result, and he would benefit from a rest. Pepe could slot in as a direct replacement, or try the effective role on the left again, and if he starts firing he would add another dimension to what is an often predictable and robotic Arsenal attack.

There is even a case to be made, that in the 4-4-2 formation that Arteta has used in recent weeks, starting Pepe as a central striker next to one of Aubameyang or Lacazette could help Pepe open up more shooting opportunities than he currently gets on either wing.

The £72million price tag may never truly be repaid, and the heavy pressure that comes with being Arsenal’s record signing has done Pepe no favours. There is obvious talent with the winger, but it is now down to both him and Mikel Arteta to find a way to utilise it to bring more goals to the team.