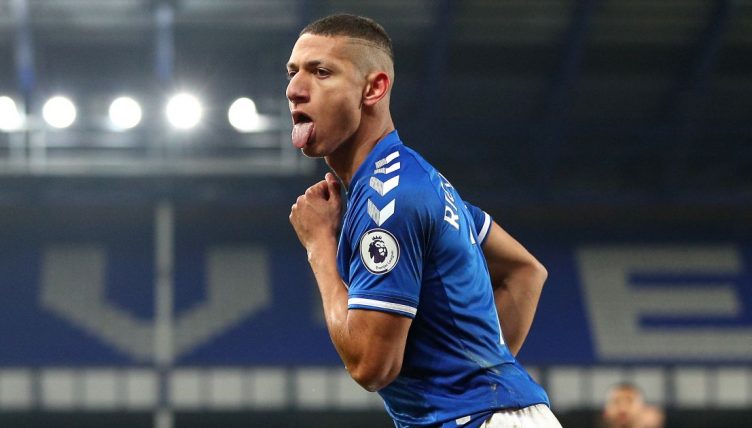 Everton‘s only goal against Southampton was illustrative of the multinational mix that is modern English football.

A 75-yard, back-to-front punt from a Wearside ‘keeper to a Yokshire-born No.9 – a Yorkshireman so obstinately Yorkshire he decided to flick it on to himself, just to show he could win as many aerial duels as he liked – a knockdown to a cool Icelandic creator, and a cultured through pass to the man running beyond.

Then the finish, one that left you needing to see neither name nor passport to identify the scorer’s roots.

The Toffees’ No.7 dropped his left shoulder and made Fraser Forster believe he’d take on the shot first time. But one touch took it around Forster, leaving the Southampton ‘keeper on the ground and the goal gaping. The second put it into the back of the net.

Dribbling around the goalie before scoring is an art – one that many people from all over the world have tried, with varying degrees of success. But the true masters of it come from one nation and one alone.

With the way he chose to take his chance against Southampton, Richarlison was keeping a Brazilian tradition alive. Though he might not be on the level of Romario or Ronaldo, he idolises them and clearly tries to emulate them, especially the latter.

A conversation between a star-struck Richarlison and Ronaldo was aired on Everton’s official site in May 2020, a couple of months after the Everton forward had revealed a lockdown haircut that paid tribute to the ex-Barcelona and Inter man’s legendary World Cup 2002 trim.

“Ronaldo is an example to me,” Ricahrlison said last year. “He won a lot of trophies, the World Cup, the Ballon d’Or. I want to follow in his footsteps.”

Richarlison opens the scoring for Everton with a cool finish! ❄

He’s got a hell of a way to go, but the goal against Southampton was not a bad way to start. Importantly, it was also Richarlison’s third in three games, after one in the loss to Manchester City and another in the long-awaited win over Liverpool at Anfield.

Following a dry spell that had run to eight Premier League games before that, it is a welcome return to form, well-timed for Everton as they fight for a place in the top four, but also for the Brazilian national team, with the international break coming up at the end of this month.

Brazil will play two huge World Cup qualifiers – Colombia away and Argentina at home – and though Richarlison would be happy to start out wide, as he has done for most of his Selecao career so far, he may well be eyeing up the central striking position.

Though Gabriel Jesus and Roberto Firmino have both been given chances as Brazil’s central striker, neither has convinced a significant cross-section of their compatriots that they are the right man to lead the line.

Gabriel Jesus did not find the net once playing up front for the Selecao at the 2018 World Cup and was pelted with criticism as a result.

Firmino has been preferred since then, and while Brazil won the Copa America on home soil in 2019 with the Liverpool man through the middle, there remains a feeling that he does not particularly suit coach Tite’s system.

Firmino tends to drop deep, occupying the space in which Philippe Coutinho and Neymar like to operate, which causes the area between opposition midfield and defence to become overly congested.

While there is a more substantial lobby for the inclusion of Flamengo striker Gabriel ‘Gabigol’ Barbosa in Brazil – Brazilians tend to prefer the best domestic players for the Selecao – Richarlison has his supporters too.

The Everton man, who has often appeared centrally alongside Dominic Calvert-Lewin this season, certainly has useful characteristics. He is quick, strong, good in the air – and, when presented with one-on-ones, he can finish.

Importantly, he is also more likely than any other of the options to run in behind, stretching opposition backlines like he did against Southampton for Everton and creating space in which creative types can work.

As mentioned, Brazilians – journalists and fans alike – tend to prefer players that pull on the shirt of a domestic club. It is only natural. They see them every week, while many rarely watch Premier League or other European matches. The physical distance to Europe-based players creates a barrier.

But even on this front, Richarlison has been doing some good work. Everton fans will tell you they love Richy for his gregarious personality and willingness to interact with fans (and detractors, see below), especially kids.

The same is increasingly true in his homeland. As well as showing he can score in top European league, the 23-year-old has a huge Brazilian following on social media.

He is constantly commenting on the latest series of Big Brother – which is still massively popular in his homeland – or posting silly videos and replying to his fans with disarming alacrity and sincerity.

In an interview with Brazilian newspaper Estadao in February, the Everton player said: “When I was younger, I never had the chance to see my idols up close or to exchange thoughts with them. So, I try to do it a bit as a way of giving back.”

He has found other ways to give back, too, further boosting his popularity. In 2019, he put up the cash for a group of state school kids from his home state to travel to the International Mathematical Olympiad in Taiwan, and in April last year, he lent his backing to a University of Sao Paulo campaign to raise money that was used to help fund coronavirus vaccine research.

More recently, he has spoken out against the brutal murder of a black man by supermarket security guards in Brazil and dedicated his goal in the last round of World Cup qualifiers to people in the state of Amapa, who, owing to government negligence, had been without electricity for weeks.

Richarlison followed that up by speaking up for a young Brazilian woman whose rapist was let off scot-free by a judge who inexplicably concluded that he didn’t intend to rape her, and donating money to buy medical-grade oxygen cylinders for people in Manaus when hospitals in the Amazonian city had run out of it.

“When there is an important cause, I’ll always speak up, even more so while I’m playing for the Selecao and in England,” Richarlison said in November. “I have this visibility and know the authorities will look [upon the causes I support] favourably.”

Though standing up for downtrodden people is not in itself a reason to be selected ahead of Jesus, Firmino or Gabigol, creating a strong support base in Brazil through his off-field actions will have done his cause no harm.

As Brazilian journalist Martin Fernandez wrote in O Globo in January this year: “The most important Brazilian footballer is a 23-year-old who wears the Everton No.7 shirt.”