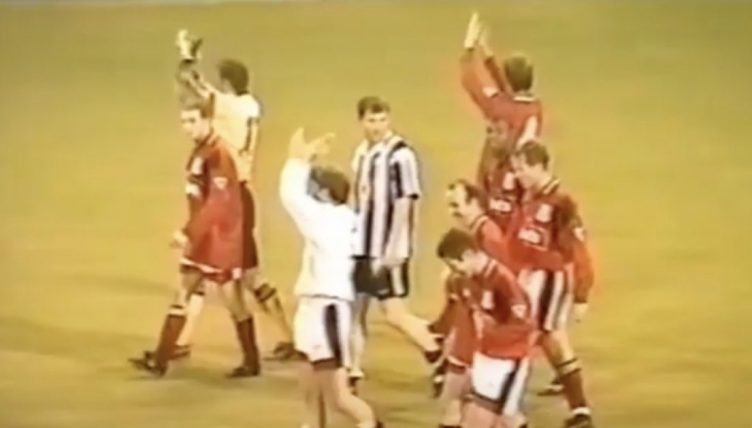 It would have been a reoccurring daydream for any Newcastle United fan growing up in the 1990s – Kevin Keegan whisks you from obscurity, gives you a black and white shirt and then tells you you’re going to play for his star-studded side.

Just for good measure, you mark the occasion with a goal, immortalising yourself into club folklore.

For most people, playing out that fantasy in their head is as close as they’ll ever come to playing for the Magpies, but that dream became reality for Steve Guinan, who must hold the title for Newcastle’s most obscure goalscorer.

The bizarre moment occurred on a late spring evening in May 1996, a couple of days after the curtain had come down on a painful season for Keegan’s side, who had allowed Manchester United to steal the Premier League title from under their noses despite boasting a 12-point lead in January.

Before the superstar-filled squad could jet off for sunnier climes and put that painful collapse behind them, they had one final commitment – a testimonial for Nottingham Forest legend Stuart Pearce.

Keegan paid his respects to the legendary left-back by bringing a full-strength side down to the City Ground, but it would be an unknown name that would make his mark for the Magpies that night.

Guinan was just 20 at the time, and the striker had only made his Forest debut a couple of months earlier.

“The game was quite a big deal for us,” Guinan says. “Stuart was a legend at the club so everyone wanted to be involved, including all the lads who were on the periphery like myself. We knew it was a great opportunity because one or two would have to make the numbers up.”

However, an injury in the warm-up reduced Newcastle’s options on the bench, and Keegan asked Forest boss Frank Clark if he could borrow a player to help rotate his squad. The request was granted, and the search was on for a last-minute ringer to don the black and white stripes.

“I came back to the dressing room and none of the senior pros wanted to do it, so it was offered to myself and Bobby Howe,” Guinan says. “Bobby was a Geordie and a Newcastle fan, so I stood back thinking he’d jump at the opportunity, but he was petrified!

“He was too nervous to do it, so the eyes turned to me. I was overjoyed.

“Afterwards Bobby admitted if he’d had time to think about it, he’d have said yes. I had no hesitation though – there were a few giggles from the Forest lads, but I was just a young pro and I’d have accepted being involved in that game in any capacity.”

For one night only, Guinan was to be a Newcastle player. His Stars In Their Eyes transformation was complete when he was introduced to his supporting cast for the evening and pulled on the iconic Adidas and Newcastle Brown Ale-sponsored shirt with number 12 on the back.

Guinan remembers the quick costume change well. “I had to strip off my Forest kit and go into the other dressing room, which was quite daunting. Keegan met me outside and said, ‘Don’t worry about it, just come in.’

“It was pretty surreal. I scanned the room and saw David Ginola, Tino Asprilla, Les Ferdinand, Philippe Albert and Shaka Hislop, and they were a bit dumbfounded themselves, wondering who the hell had just walked into their dressing room!

“Kevin said to everyone I was a young pro at Forest who was meant to sit on their bench but was going to play for us instead.

“There were a few hellos and nods, and I got some Newcastle kit chucked at me. Everyone at Forest used to say it was a nice strip but to put it on was bizarre!

“I couldn’t take much time to look at myself wearing it in the mirror because I’d have been battered by the other lads!”

Despite being a testimonial, Guinan admits the encounter had a little bit of needle, as just eight days earlier at the same venue Forest had held Newcastle to a 1-1 draw to effectively end any hopes of the title returning to St James’ Park.

However, after a competitive first half ended with the hosts leading 2-1, the fun began. Forest keeper Mark Crossley got on the scoresheet during a stint outfield, as did Keegan who, alongside his assistant Terry McDermott, appeared as a late substitute in a 6-5 home win.

But the most peculiar moment of the night came moments after Guinan entered the fray as a 70th-minute replacement for Asprilla.

“About 10 minutes before, Keegan told everyone that they were getting on,” Guinan says. “Even though I was a Forest player, I was desperate to get on just to say I played in a game with those kind of players and personalities, but to run out on your home pitch in a black and white strip was strange to say the least.

“There were a few comments from Colin Cooper and Des Lyttle who were winding me up, telling me to calm down and stop running, but I wanted to make some type of impact.

“I can remember the ball coming in and I was about six yards out. It was a fairly simple header, and I scored. I didn’t celebrate because I knew my place, so it was just a smile and kept my head down, but the Newcastle players congratulated me.

“Meanwhile, I was getting absolutely slaughtered by the Forest lads saying I wasn’t allowed to score against them!”

The determined Guinan had made the impact he desired, and after assisting Warren Barton for another goal, duly received the adulation of over 1,000 members of a mystified Toon Army.

“Newcastle continued to attack for the next 10 minutes and the fans were singing ‘mystery man is a Geordie’ – it was ringing in my ears!

“I can remember Keegan came on and just roamed about, and I played a ball in behind for him to run onto. As I played it, I thought, ‘It’s Kevin Keegan, he’s probably about 50 years old and he’s got no chance of getting that!’

“He turned around and gave me a rollicking about playing it to his feet. I was thinking, ‘What the bloody hell is happening here!’ It was mesmerising.”

Eventually, the final whistle meant even Guinan had to wake from this particular dream, but he is left with one treasured memento from a night he’ll never forget.

“Back into the dressing room all the players gave me a round of applause, and then I remember being stuck in no man’s land wondering whether to shower with them or return to the Forest dressing room!

“I said to Keegan that I’d go back, and asked what to do with the kit. He said I should keep it. I still have it, and my only regret in hindsight is that I would have loved to have gotten it signed.

“I went back to the Forest dressing room and got plenty of stick, but I did manage to get the Forest shirt I was due to play in signed by my team-mates.”

Guinan ultimately appeared just nine times for Forest’s first team followed by a decent, if nomadic, career in the Football League before retiring in 2013. 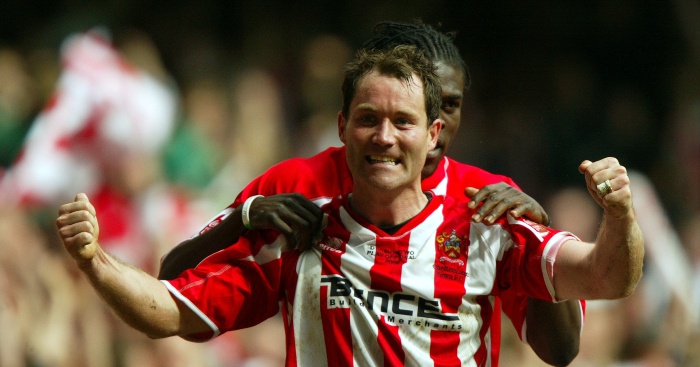 He’s now a coach developer for the FA, helping players transition into coaching and management, and when he reflects on his playing days, that incredible night on the banks of the Trent nearly 25 years ago shines just as brightly as his other highlights.

“The games that stand out are scoring the winner in a play-off final for Cheltenham Town and getting promoted with Hereford United, but the night I played for Newcastle is also right up there,” Guinan says.

“Ginola and Ferdinand were in their pomp at the time, so they’d definitely be two of the best players I ever played with.

“It’s just a shame I had no family members there that night, or any photos or video footage to look back at it again. My son is 16 and doesn’t believe me that it happened, so I’d be keen to get a copy of the game to prove it to him!

“Regardless if I see it again or not, it’ll stay with me until my dying day.”

Since speaking to Guinan, we owe a huge thanks to @RealForestTV, who tracked down footage of the game to allow the striker to enjoy his magic moment in all its glory once again.