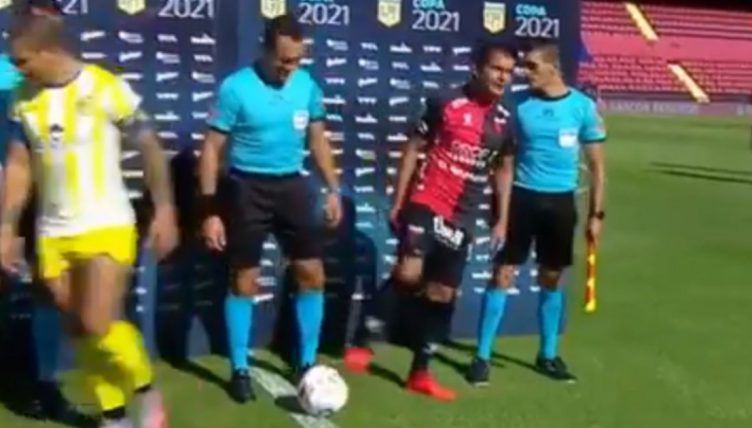 The element of surprise can be everything in football.

Remember when Everton manager Roberto Martinez stuck Romelu Lukaku out wide to catch Arsene Wenger’s Arsenal unawares in 2014? He repeated the trick with Belgium against Brazil at the 2018 World Cup and it worked again – but only because he’d rarely used the tweak since.

Then there was Sheffield United’s unique approach in the 2019-20 Premier League, which befuddled their top-flight opposition and gave them the edge required to outperform expectations.

When that surprise is lost, though – when the opposition come up with a plan to counteract it – it can have dire consequences. Over the last few weeks, Club Atletico Colon captain Luis Miguel Rodriguez has learned that lesson the hard way.

Rodriguez – better known as El Pulga, or ‘The Flea’ – is a player little known outside Argentina. But in his homeland, he is a cult hero to top all others.

He’s 5’4″ in heeled shoes. He’s about as handsome as most rugby union hookers. And in terms of physique and athleticism he is what we might call the anti-Crist(iano Ronaldo); stout and plodding, as lithe and graceful as a tub of Play Doh.

Yet Pulga has something most footballers don’t. He is a bona fide artist with the ball at his feet, a born entertainer, a man just as concerned with the aesthetics of the goals he scores or the passes he makes as he is with the acts of scoring or passing themselves. Which brings us back to his lost element of surprise.

On Sunday, March 21, Colon were hosting Rosario Central at their Elephants’ Graveyard stadium (nicknamed owing to the club’s propensity for beating the giants of Argentinian football). El Pulga saw the ball in the centre-circle and smelled an opportunity.

Fernando Espinoza had his legs apart, so El Pulga rolled his studs over the ball, attempting a nutmeg. But Espinoza was alert – he’d seen this trick before and had a plan to counteract it. He quickly brought his feet together and the ball bounced off his boot.

Rodriguez had been thwarted… by the ref.

Espinoza is not a Rosario Central player but an experienced Argentinian match official. Yet when Rodriguez is around, even they are not safe from embarrassment. Nutmegging referees has become Pulga’s signature move.

He did it before the biggest match of his career – the Copa Argentina final in 2017. He did it again in February to the unsuspecting Mauro Vigliano before Colon played Central Cordoba.

But now the men in black are getting wise to his tricks. He’s lost the element of surprise.

Espinoza managed to get his legs together in time. Others have started whipping the ball away from El Pulga when he lines up for the captains-and-officials pre-match photo, putting it as far away as possible from he stubby, magical little legs. One ref even tried to get the nutmeg in on Rodriguez in first.

After Espinoza stopped Rodriguez’s latest attempt, El Pulga told him: “You’ve fucked me. I’ll get you next time.” And don’t put it past Rodriguez to find a way – as we said, he’s an artist, the archetypal Argentinian street urchin footballer. He’ll work out a way to get that element of surprise back.

In the meantime, Argentina will have to enjoy the range of Rodriguez’s other abilities, and goodness knows there’s plenty to enjoy.

Those skills, as so often is the case with South American No.10s of a certain order, were honed during a tough upbringing. Rodriguez grew up in the hot, dry, northern Argentinian province of Tucuman in a village called Simoca about an hour’s drive from the province capital San Miguel de Tucuman.

One of nine kids, his family struggled to makes ends meet. He has said they never lacked food, but they could not stretch to a pair of football boots and he played barefoot on the dirt pitches and calles near his home.

Being the eldest, he also had to go out to work to help support his siblings. As a boy he worked as a labourer on building sites or as a decorator’s helper or whatever else he could do to bring in a bit of cash.

In a 2016 interview with El Grafico, Rodriguez said that early part of his life shaped his character: “Today, I value everything that I have earned or will earn. Because everything I have cost me so much [to get]. When you suffer in childhood, what you earn after you value and take double care of. You don’t forget.”

Opportunities as a footballer didn’t come easily, either. As a teenager, a dodgy agent tempted him with the offer of a contract in Romania but left him in the lurch. So disillusioned was he at the time that, aged 18, he told his parents that he would give football up and concentrate on his other work.

But his brother Walter convinced him to continue and found him an opportunity. Pulga signed for third-tier Racing de Cordoba and did well. But, homesick, he quickly returned to Simoca, where he played in the regional lower leagues for £80 a month. It was barely enough to help his family, but there, aged 20, he was finally spotted by local side Atletico Tucuman.

His goals helped Tucuman into the second tier from the third and then into the first from the second. He finished as top scorer in the Segunda Division in 2009 and in doing so attracted the attention of a certain Diego Maradona. Maradona, then Argentina manager, called El Pulga up to the Argentina national team in 2009, saying: “I called him because I see a mischievousness very similar to my own.”

By then aged 24, Rodriguez got a 30-minute run out in a friendly against Ghana that featured mostly domestic-based players and that remains his only cap, but that recognition from El Diego is enough to tell the world just what it needs to know about the ability of the man from Simoca.

A season at Newell’s Old Boys followed, but Rodriguez was soon back home with Atletico Tucuman, where he would go on a rollercoaster ride. He went down with them, but brought them back up and led the club into its golden era, getting into that cup final in 2017 where he scored but Atletico lost 2-1 to River Plate.

The next year, Rodriguez’s goals – almost all of which seem to be magnificent lobs, which he can score with both feet – fired Atletico to the quarter-finals of the Copa Libertadores, where they were only stopped by holders Gremio.

After becoming Tucuman’s all-time top scorer in 2018 and cementing his godly status on the terrace, Pulga moved to Colon for a career last hurrah aged 34 and has continued his magnificence in the Santa Fe club’s red and black shirt.

He propelled Colon to the Copa Sudamericana final in 2019. Again, he ended up on the losing side – but that did not stop him. Aged 36, he is still nutmegging referees and is now the joint-top scorer in the Argentinian top flight.

The goals he scores goals continue to be spectacular, too. In November last year, he produced an outside-of-the-boot lob – yes, another one – from outside of the box that flew over the head of the Central Cordoba goalkeeper and was without doubt the goal of the season.

In mid-March, he got two against Estudiantes. The first was an unstoppably powerful free-kick, the second – you guessed it – a wonderful, looping lob. He dedicated both to a fan who messaged him earlier in the week saying that her grandfather had passed away.

Pressed for which goal is his best, he still won’t choose any of his recent efforts though. That prize can go to only one goal, one he scored in the light-blue-and-white strip of his beloved Atletico Tucuman; as he puts it, “the only shirt I have ever kissed”.

In a league game in 2014, El Pulga whacked a bouncing ball almost from the centre-circle and it flew over the head of the keeper and into the back of the net.

As a boy he was Boca Juniors fan, but he is unlikely to ever get to play for the club of Maradona, Riquelme and Tevez. It is hard to imagine, though, that we will not see Rodriguez back in the shirt of Atletico Tucuman at some point.

Even as he ages and the wrinkles on his face deepen, he loses nothing of what makes him a joy to watch and what brings him joy, too.

Asked in that El Grafico interview is he was content, he replied: “Of course! I live off what I love, I do well. And on top of that I score goals.”