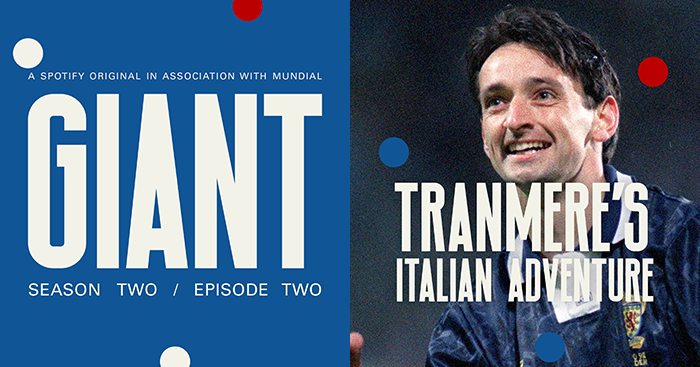 Pat Nevin played for Chelsea and Everton and represented Scotland at Euro 92 – but he ranks his season playing in the Anglo-Italian Cup for Tranmere as one of the most enjoyable of his entire career.

The Anglo-Italian Cup, originally formed in the 70s, was a madcap tournament that saw clubs from second-tier English and Italian football pitted against each other.

Infamous for crowd trouble, matches being abandoned and managers being carried off on stretchers, it was re-established in 1992 but lasted only four seasons before being scrapped again, with the two leagues unable to settle on fixture dates.

But ask fans of the clubs involved – well, at least the English ones – and they’ll tell you it was brilliant. Indeed, the editor of this very website fondly recalls heading to Stoke’s Victoria Ground as a kid for a game under the lights against Fiorentina, Gabriel Batistuta and all.

And in the second episode of the second series of GIANT, the award-winning Spotify Originals podcast produced by MUNDIAL, the tournament is celebrated in all its glory as Tranmere Rovers’ foray into European football is remembered by the fans and players who witnessed it first-hand.

It’s 1992. @TranmereRovers, a team from Birkenhead, are on the up. European competition, in the madcap form of the Anglo-Italian Cup, beckons.

This is #TranmeresItalianAdventure, a @spotifypodcasts Original.

It’s a story full of adventure, late nights, local pride and Johnny King, the brilliant manager who had reinstalled hope and success at the club through honesty, humour and some exceptionally good footballers.

Two of them, Pat Nevin and John Aldridge, feature on the podcast. And what is perhaps most striking is how Nevin speaks about this strange competition. It’s no surprise to hear the fans fondly reminiscing about free booze on the British Airways flight and putting drinks on the chairman’s hotel bar tab, but Nevin was coming off the back of nine successful years in the First Division when he joined Tranmere in 1992. Games against second-class Italian opposition weren’t going to excite him, surely?

Except English clubs had been banned from European football following the Heysel stadium disaster of 1985 and Nevin had missed his chance to play at the top level. Or at least he would have done if it wasn’t for Tranmere. His time on the Wirral wasn’t just a footnote in his career; he stayed for five years and loved every minute of it.

“My entire career playing at the top level had been ruined by the ban,” he says. “I’d never got to play Champions League, Europa League, the UEFA Cup as it was in those days, because during my time at Chelsea and Everton we were banned from European football.

“My first games in Europe were in the Anglo-Italian Cup.” 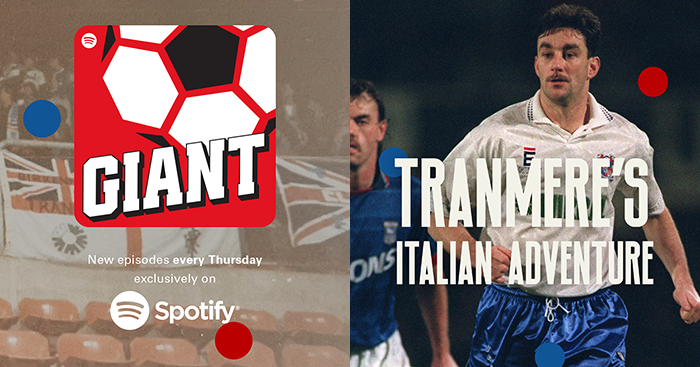 You can hear the excitement in Nevin’s voice as he recalls Rovers’ first home game in the competition against Cremonese – “it was pouring with rain at one point which made for just as much excitement, it really did feel like European football” – but in truth it was King, as much as the tournament, that had inspired the players. The most successful manager in the club’s history, his statue sits proudly outside Prenton Park today.

Nevin had spent time on loan at Tranmere to fight his way into the Scotland squad for Euro 92, and when the chance came to join up with King permanently, he didn’t hesitate.

“That worked an absolute treat and when I had the choice that summer I had two teams: I could go to Galatasaray or I could sign for Tranmere Rovers. And I chose the mighty Rovers.

“The most important thing about John King was he loved football and he loved attacking football. His attitude when he talked to me about signing was, ‘I want you to get on the ball, get it wherever you can, cause mayhem with the opposition, and enjoy yourself.’ And I’m thinking, ‘Finally, someone who thinks about football the way I do.’

“There was something absolutely fantastic about the atmosphere at that place, that club. I loved it, I absolutely, utterly loved it. I think of the best and most enjoyable seasons of my career and that one was right up there.

“I adored the man and he’s still loved by those Tranmere fans and rightly so. That statue is fantastic. I remember coming down not long before he died and I had to do a little bit of a speech. And then I was asked to do another one when we lost him. And honestly, the tears in that room were incredible. The feeling in the room for that man was incredible. Top, top guy. I adored the guy.”

Listen to Tranmere’s Italian Adventure on Spotify now to hear all this and plenty more brilliant memories from a wonderful season, from the players hiding beer and takeaways from King the night before a game to fans advertising for air miles in the local newspapers to blag their way to Italy. It’s what football is all about.