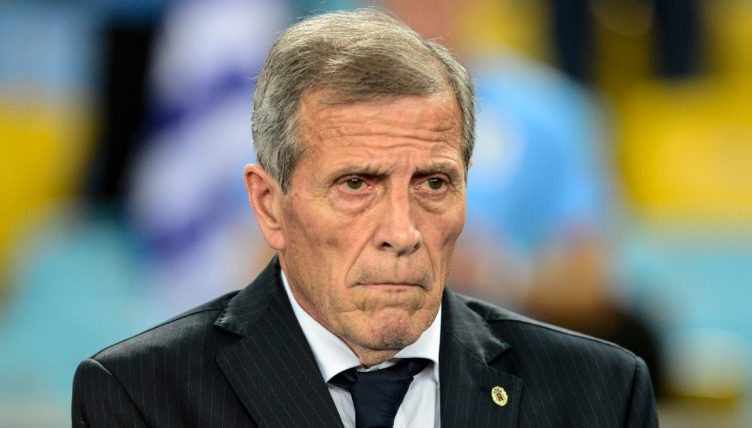 As with every other major tournament for the past decade and a half, Uruguay’s 2021 Copa America campaign is being overseen by the nation’s legendary elder statesman, Oscar Washington Tabarez.

Nicknamed El Maestro – The Teacher – following his years working in a primary school between his relatively unremarkable playing career and his time in the dugout, Tabarez holds a status and reverence few can match in the modestly-sized South American country with a population comparable to that of Wales.

Since returning for a second stint in charge of the national team in 2006, the Montevideo-born former defender has restored La Celeste’s historical reputation as football’s great bootstrappers.

The patriarch of a golden generation characterised by Luis Suarez, Edinson Cavani and Diego Godin, Tabarez led Uruguay to the semi-finals of the 2010 World Cup and won the 2011 Copa America, with more than a few scalps taken since. No manager in history has taken charge of more games for one national team.

Having worked as a coach since 1980, the 74-year-old is one of the last survivors of the old guard, and has now outlasted his competitor from the 2014 World Cup, Roy Hodgson, who is five months his junior.

Fellow alumni from Italia 90, during his first stint in charge of Uruguay, include Bobby Robson, Valeriy Lobanovskyi, Carlos Bilardo and Franz Beckenbauer. Names from another era in the annals of football folklore.

His tenure continues in spite of being diagnosed with Guillain–Barre syndrome, a rare degenerative disorder that requires him to use crutches on the touchline, in 2016. The news prompted messages of support from around the world of football, including his former club AC Milan, and assumptions that he would be forced into retirement.

Yet he continues, defiant, stoically determined to see this story through.

Godin, winding down his club career at Cagliari, remains the captain, while Suarez and Cavani – each on 122 international caps, with 64 and 53 goals respectively – are still providing the firepower. Galatasaray goalkeeper Fernando Muslera is a reassuringly familiar figure between the sticks.

In September 2018, Tabarez signed a new four-year deal that runs through to the 2022 World Cup in Qatar. It looks set to be the golden generation’s swansong, and it just wouldn’t feel right for somebody else to be in the technical area. 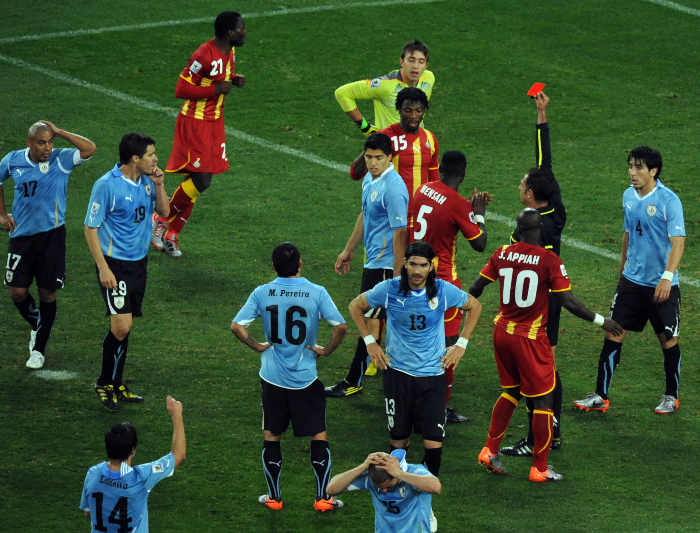 READ: Eight of the most fun international sides since 2010: Italy, Chile, Wales, Uruguay…

“We have a connection,” Godin said during Uruguay’s run to the quarter-finals in the 2018 World Cup. “We have a lot of respect for El Maestro and we learn from him every day.”

“Happy birthday, Maestro,” Suarez posted on Instagram on the veteran coach’s 74th birthday. “Words cannot do justice how grateful I am for what you’ve meant in my career.”

A noted Che Guevera disciple and an anti-colonialist, Tabarez hasn’t been afraid to call upon that rhetoric to create an us-against-them bunker mentality when it suits them.

The veteran coach has defended Suarez, Uruguay’s all-time top scorer, to the hilt throughout his chequered past. He slammed “truly shameful” framing by the British press following the striker’s infamous handball against Ghana at the 2010 World Cup, and once again criticised “English-speaking” journalists for making “a scapegoat” of Suarez after his four-month ban for biting Giorgio Chiellini at the 2014 World Cup.

Such a stance was inevitably met with eye-rolls on the other side of the Atlantic, but being a staunch defender of his players only saw Tabarez’s legend grow back home.

In May 2020, he took part in a campaign to honour the memory of almost 200 people that disappeared during the military junta dictatorship between 1973 and 1985. The annual ‘March of Silence’ in Montevideo, to commemorate the victims, is ordinarily one of the largest social gatherings in Uruguay, but the numbers were hit by the early peak of the pandemic. Instead, Tabarez was one of several prominent public Uruguayan figures to pose with a photograph of one of ‘the disappeared’ in a viscerally striking project.

“What we wanted to do was, using a well-known face, get people to ask themselves: What’s going on? To reveal that it’s not just a poster but rather that it was a person who was arrested and disappeared by the dictatorship, by the Uruguayan state,” photographer Federico Panizza told La Prensa.

“Tabarez has united the Uruguayan people behind their national team, so much so that children and the new generations venerate and love their national team and its players,” Esteban Gesto, a friend of Tabarez’s that worked as a fitness coach during Italia 90, told Goal following Uruguay’s World Cup quarter-final exit in 2018.

“It is a truly difficult process in today’s football, where only winning matters.

“He has done this through the honest effort and respect that radiates from his work and the behaviour of his players; those who were here before, those who are there now, and those who will come in the future.”

‘El Maestro’ has been the father figure to the iconic players that have defined the Uruguay national team’s success for the past decade. While they remain, his tenure has not been static or stale. They’re not Chile, where you imagine Gary Medel, Claudio Bravo and Jean Beausejour would still keep turning out come a post-apocalyptic 2034 World Cup administered by cockroaches.

The evolution has seen the likes of Diego Lugano and Diego Forlan fade away, and new faces like Jose Gimenez, Nahitan Nandez, Lucas Torreira and Rodrigo Bentancur welcomed into the fold as they approach their peak years.

Still, there is no guarantee of riding off into the sunset. Their spot at Qatar 2022 hangs in the balance after mixed results in the round-robin CONMEBOL qualifiers so far – two wins, two draws, two defeats – and they kicked off their Copa America campaign by losing 1-0 to Argentina, failing to score for a fourth successive game.

The final 18 months of his dynasty has threatened to go out with more of a Wenger-esque whimper than a Ferguson-style bang. But if we know anything about Tabarez’s Uruguay, it’s this: they will not go down without a fight. Successive victories over Bolivia and Paraguay have confirmed their place in the Copa America quarter-finals, with Colombia awaiting.

No matter how he bows out, ‘El Maestro’ will receive a hero’s farewell when the time finally does arrive. What he has done for Uruguay is incalculable.