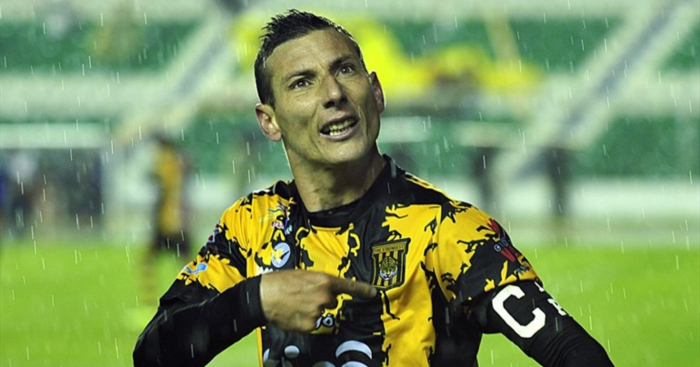 A No.10 in true South American style – all left foot, rebellion and free-kicks – Pablo Daniel Escobar is your favourite cult hero you never knew.

Born in Paraguay, Escobar didn’t move to his spiritual home of La Paz until he was 26, and it wasn’t until the age of 32 that he truly began to cement himself as a legend of Bolivian football.

In fact, the first half of his career was largely nomadic, with the attacker appearing for 10 clubs in four different countries. By the time he came to settle at The Strongest in 2011, it was already his third spell with the club.

“The most beautiful things were spent wearing this shirt,” he said upon his retirement at the age of 40 in 2018.

As with many of the most vibrant characters in the game, there is a poetry to how he speaks.

In the same press conference to announce his retirement, he said: “On December 20 I will breathe deeply and fall into what happens,” before ending with what has almost become his personal motto “prohibido desistir”, which roughly translates to “forbidden to give up”, and signing off with a shout of “long live the Tiger” – referring to the club’s nickname.

After once being detained in Medellin, the Colombian city in which his notorious namesake held a stronghold, Escobar made a quip to authorities based on the drug baron’s moniker as The Patron of Evil: “Take it easy, I am the Patron of Good, or of Goals.”

And the record books illustrate Escobar’s brilliance. No player has made more appearances or scored more goals for The Strongest. Five titles have been secured with the enganche from Asuncion in the side.

In his final game before retirement, he scored four goals in an 8-0 thrashing of Blooming to become the highest goalscorer in Bolivian football history.

Such is his affinity with La Paz and Bolivia, he switched international allegiances to his adopted country, becoming the oldest player to score in South American World Cup qualifying, aged 36, with a brace against Ecuador.

But he shares another trait with the greats of the game. The cold, hard facts of his success are impressive, but more bewitching was the way in which he carried himself while he achieved them.

Watch back any highlights reel of his time with The Strongest and marvel at the ferocity of his finishing and the subtlety of his dribbling, his languid movement and his explosive left foot.

Try not to fall in love with the way his personality seeps into whatever he does on or off the pitch, whether it be grabbing his bollocks in some sort of furious ‘fuck you’ to the entire nation of Chile, passionately pleading with the referee to book his own linesman, or emotionally screaming into a television camera while brandishing a message apologising to his family for not being home for Christmas as he was too busy securing another title.

Given he has spent his entire career in South America, specifically with one of the continent’s less distinguished nations, it’s difficult for British fans to know too much about the minutiae of Escobar’s career.

And therein lies much of the allure. We can see the attitude, we can see clips of him sitting defenders on their arse, we can see him spanking the ball into the top corner past a hapless goalkeeper time and time again.

And we can also see the romance. While so many bemoan the lack of loyalty in football, Escobar has only had eyes for The Strongest since 2011, returning to the club just months after his retirement as head coach with previous boss Cesar Farias having taken over the reins of the national side.

The Copa Libertadores often shows South America as the Wild West of the footballing world, and Escobar himself remains something of a throwback character an anachronism amid the corporate seriousness of the modern game.

We rue the fact we never became more familiar with Escobar as a player, but, if anything, the point of his genius was that it always came away from the limelight – a gleaming treasure trove just waiting to be discovered by the wider world.

Man Utd, a bullet to the brain & the enduring legacy of Salvador Cabañas