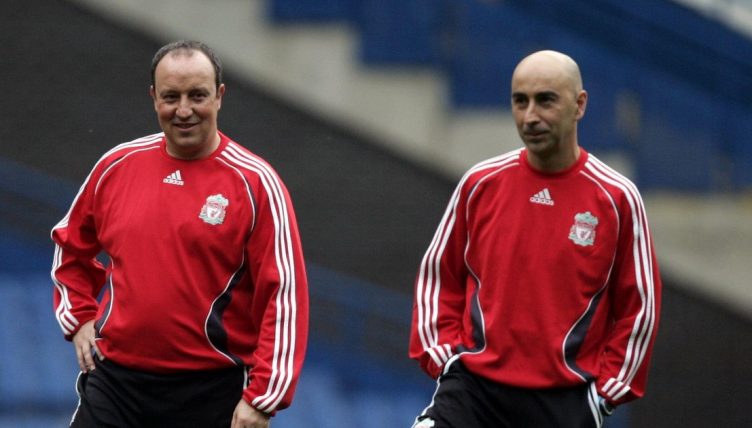 Pako Ayestaran spent a largely successful three years as Liverpool’s assistant manager between 2004 and 2007 – and four players spring immediately to his mind as being key to that success.

Ayestaran ended his 11-year, five-club partnership with Benitez a few months later on acrimonious terms, but looking back now, the Spaniard can feel rightly proud of what they achieved together, not just at Liverpool but also with Osasuna, Extremadura, Tenerife and Valencia.

Gerard Houllier had put many of the building blocks in place that led to Liverpool conquering Europe in Benitez’s first season in charge, but Ayestaran was the driving force behind the at-the-time uncommon rotation policy that proved so successful, while the signings of Luis Garcia and Xabi Alonso in particular were crucial in taking the Reds to the next level.

Predictably, though, it is a player preceding his arrival that Ayestaran is first to praise as being instrumental.

“The special players show themselves from minute one,” he says. “Apart from their quality as players, the mental one makes them standout from others.

“It’s not easy to get to the level of Steven Gerrard. But every player who has been able to establish themselves at a high level at top European teams for many years can feel very special.

“Ones like Xabi Alonso, Javier Mascherano, Didi Hamann, with different characteristics all of them, have been able to establish themselves at big clubs like Liverpool, Barcelona, Bayern Munich and Real Madrid.” 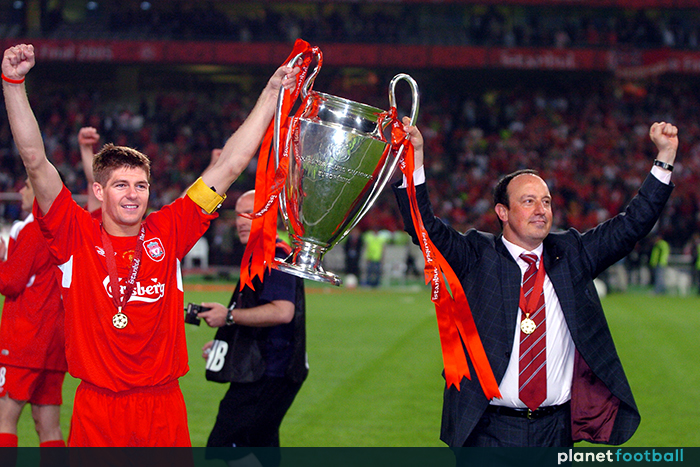 As well as the ability of the aforementioned quartet to play the kind of football Benitez asked of them, it was their strength of character – as well as several others, of course – that Ayestaran says was key to not only the Reds’ success but all of the successful teams he has coached.

“In any style, players are always easier to coach once they arrive with the style you want to set,” he says. “This style cannot be far from the challenge they have at the time.

“Sometimes I think we want to set a style without thinking if they are suited to the style. It makes the relationship easier at first, if you recognise and respect the characteristics of the players.

“Once they understand their roles, you make them step out from their comfort zone little by little. You have to find the right competition between players.

“It’s crucial to bring them out of their comfort zone. You have to not only bring the best from the team, but from everyone within the squad. Some of the ones that have this competitiveness, it comes from the inside.

“Some of them need someone to compete with them to push them. I have been lucky during my career to work with a few players that this competitiveness comes from inside, which is why I have been part of many successful sides in my career.

“You have to be surrounded by the right people in sport to be successful. Having players that compete with themselves without the need to having someone alongside them is what makes these teams different.”

Liverpool had first taken note of Benitez and Ayestaran in September and October 2002 when Valencia twice beat Houllier’s side in their Champions League group, having won La Liga for the first time in 31 years the previous season.

Los Che went on to win the Spanish title again in 2003-04, as well as the UEFA Cup, before Benitez and Ayestarán left for Liverpool, but Ayestarán is modest about the team they built at the Mestalla.

“Everybody thinks that the success belongs to them,” he says. “First of all, the team had stability, and this stability was set into the club.

“I was with (Southampton manager) Mauricio Pellegrino before he went to England. We were talking about his success at Alaves and he said, ‘The most important thing when I arrived at Alaves was that I found everything in the right place.’

“At Valencia, the stability and the continuity that was set into the club was important. Apart from that, it was the quality of the squad we inherited. Without these two ingredients, everything becomes more difficult.”

Valencia had some talented players in Roberto Ayala, Ruben Baraja, Mista and Vicente during that period, but as with Gerrard at Liverpool, Pablo Aimar’s ability stood out from the rest.

“Apart from his quality, he was a very professional, ambitious and disciplined player,” Ayestaran says. “Despite his quality and the importance of him in the final third of the pitch, he was humble enough to work as hard as any other player.

“We used to be amazed at the amount of metres that he used to cover at a high intensity in every game. Apart from his technical quality and knowledge of the game, his discipline made him such a special player.

“He told me once that when he was with the second team in Argentina after one game his dad came to him and said, ‘Look, if the rest of the players are out-running you, you should really run as well.’

“It was something that stuck with him and from then he was as hard working as any other player.”

Starting out on his ‘own path’

Ayestaran left Liverpool in 2007, as he wanted to take his “own path” as a manager, although he had a small taste of the role when he was younger. He managed SD Beasain in the Second Division in the Basque region.

“Many people don’t know that I started as a main coach when I finished as a football player,” he says. “I went to university to finish a Sports Science degree and then after I came back from Madrid, I started as a coach in my home town.”

But he was still an unknown quality as a No.1 when leaving Liverpool and it was not until 2013 that he got another chance, with Mexican club Estudiantes Tecos, whose Sporting Director studied in Liverpool and used to watch his training sessions at Melwood.

“I always admire the passion of football in South America and especially Mexico,” says Ayestaran. “Once I was there I realised that they eat and breathe football every minute.

“I enjoyed my time over there because I found a really organised club. You need a good structure at a club to succeed.

“It’s difficult to find the right set-up and standards, despite the fact people think that the manager who arrives at the club has to change everything. This is impossible. The club should have the foundations and the right basics.” 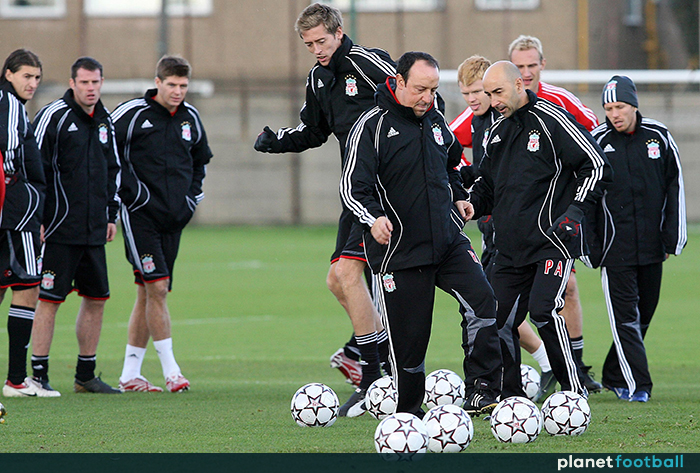 The following year Ayestaran replaced fellow Spaniard Oscar Garcia at Maccabi Tel Aviv. Once again, he found a club that had the right foundations, which had been laid by the son of the Dutch legend who imprinted his methodology on Barcelona.

“It’s down to the work that Jordi Cruyff has done before in previous years. He assembled a quality squad and this makes everything easier.

“He set the right standards into the club, in the way that the players behaved on and off the pitch. He set a high standard.”

Maccabi won a historic treble under Ayestaran’s tutelage, which had never been achieved in 80 years of Israeli football. The Premier League was the club’s third in succession, but they added the State Cup and Toto Cup in the single season.

Ayestaran had a brief spell back in Mexico with Santos Laguna before he received a call from Gary Neville to help him at the familiar surroundings of Valencia. The former England full-back had taken the job two months prior, but the club had changed significantly in the 12 years since Ayestaran had departed.

“I felt that I was welcome from the very beginning and I was lucky to have the opportunity to share the project with him,” Ayestaran says. “I wanted to get the best from his experience at such a big club like Manchester United.

“It was a pity because he was really committed with the club and the project. He tried his best to succeed, but it didn’t work.”

Though the language barrier understandably created some issues, Ayestaran says a much bigger problem at Valencia was a lack of stability he had previously benefitted from when working alongside Benitez: the club have had 10 different managers in the last five years, including Ayestaran, who took the reins after Neville left in March 2016.

“The language is an issue always,” Ayestaran says. “A few months ago, I was talking with a top Spanish manager that had been abroad and he was really successful in Spain, but not abroad.

“He told me, ‘I wouldn’t move again to a country that I haven’t control over the language.’

“The way you communicate sets the level of ambition with players, but apart from that he (Neville) was probably not at the right time or place. The club was in a tough transition and it wasn’t easy to get the best at that time.”