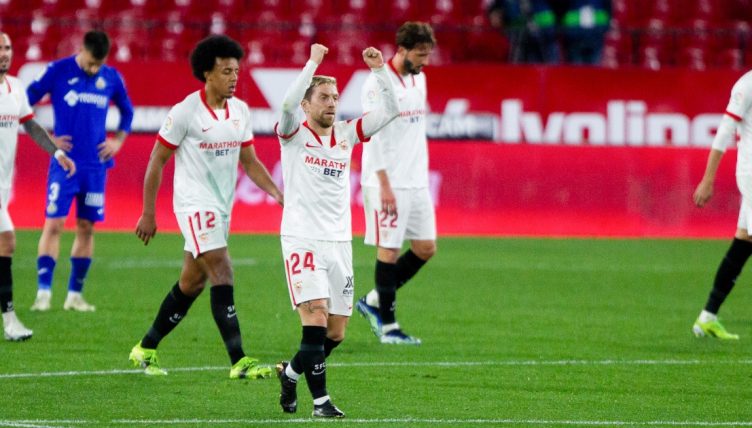 On the face of it, the first half of the 2020-21 couldn’t have gone much better for Sevilla.

Julen Lopetegui’s side are fourth in La Liga after 21 games, a point behind Barcelona and Real Madrid in second and third and six ahead of Villarreal in fifth.

Last week, they scrapped their way past Almeria to set up a Copa del Rey semi-final against a beatable Barcelona side, and in February and March they will face Borussia Dortmund over two legs for a place in the Champions League last eight.

With a solid defence, some excellent wing play, and the goals of now-prolific front-man Youssef En-Nesyri, they have built on the Europa League title they won in August – another one – and are looking to move to the next level, to become a force that can disrupt the stranglehold Madrid’s big two and Barcelona have on Spanish football.

Given their budget, it is a thoroughly impressive position to be in and further decorates the already generously feathered cap of sporting director Monchi.

More than just an expert wind-up merchant, Ever Banega was the source of Sevilla’s attacking fluidity; their most inventive midfielder last term and for some time before that. Following his move to Saudi Arabia’s Al Shabab in the summer, there was a void. 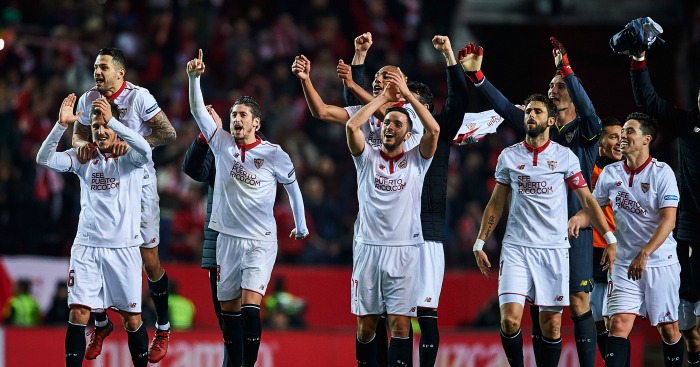 READ: How Monchi built a stunning Sevilla side that fell just short of a quadruple

Ivan Rakitic came back from Barcelona but is not a creator. And try as he might, Joan Jordan could not provide the same degree of guile.

Monchi must have known he needed a solution. In January, he finally found it. The solution’s name? Alejandro ‘Papu’ Gomez.

Gomez, the attacking fulcrum of a magnificent Atalanta team over the past three years, had fallen out with his manager in Bergamo, Gian Piero Gasperini. And despite his brilliant performances over the last three years, at 32, none of Europe’s superclubs were likely to be interested.

Monchi saw an opportunity and pounced. Though he is not a player in precisely the same mould as Banega – Gomez plays further forwards, a little to the left and is a dribbler as much as a passer – it is already looking like another masterstroke from Sevilla’s transfer oracle.

Gomez was presented to the Sevilla fans – virtually, of course – on January 26. He made his debut four days later, playing 60 minutes in that cup quarter-final with Almeria and almost setting up Luuk de Jong for an opener before he was withdrawn. Five days after that, it was his time for a La Liga bow.

The league debut came in unfortunate circumstances, Gomez replacing his stricken compatriot Lucas Ocampos, who had to be carried from the field after a horrific if unintentional challenge from Djene Dakonam.

Getafe were down to 10 with Djene sent off, but Sevilla still had to make that advantage count. As they looked to do so, their new boy played a central role.

Gomez’s 55 accurate passes in 33 minutes in addition to three successful dribbles tell you something about both the control Sevilla had of the game and the impact of their Argentinian midfielder.

A good debut, though, was clearly not enough for the new signing. With three minutes to go, he picked up the ball 30 yards from goal and in acres of room. One touch controlled it, another took it out of his feet and his third, with his magic left boot, rifled it goalwards.

It took a slight deflection off a blue chest as it rattled towards goal, giving the goalkeeper no chance. Given the speed it was travelling at before that, it may well have gone in anyway. A competent first league appearance had become a spectacular one.

An absolute ROCKET to score his first goal for Sevilla! 🚀 pic.twitter.com/ycEeHZTkVk

As the Marca headline read: “Papu Gomez is different.”

For Sevilla fans, the goal was a moment not only of celebration but of hope. Papu has hit the ground running as fast as his scrawny little legs can carry him and if he keeps it up, Sevilla’s chances of finishing higher in the league than last season’s fourth, as well as making a real go of it in Europe and the Copa del Rey, look good.

For the player himself, it was a perfect start to an interesting late chapter in a varied career.

He came through in Argentina around the same time Banega – only four months separate them in age. But while Banega was a wonderkid, winning the Copa Libertadores with Boca Juniors as a teenager before moving on to Valencia for €20million, Gomez was far more low-key.

He started off at the far less fashionable Arsenal de Sarandi before moving across Buenos Aires to San Lorenzo. Then, in 2010, he drew the attention of relatively modest Sicilian side Catania, who had finished the previous season 13th in Serie A.

Three brilliant seasons followed, and Gomez propelled Catania to their best-ever Serie A finish of eighth in 2012-13. But just as his wonderful dribbling, inventive passing and goalscoring started to see rumours emerging of a move to a European big boy, off he popped to Metalist Kharkiv.

As Banega was racking up cap after cap and going to international tournaments, Gomez was toiling away in the Ukrainian Premier League.

Perhaps it was not that much of a surprise. As Marca said, Gomez is different. He did not hop aboard the hype train until much later in his career and despite his undoubted technical skills, he lacks the added physical capacity and out-and-out pace that many of the very top clubs look for in their attacking midfielders.

After a season he was back in Italy. Again, it was with a relatively unfashionable side in Bergamo-based Atalanta. Yet together, club and player reached their zenith.

After the arrival of Gasperini in 2016, Atalanta started to play mesmerising attacking football, wave after wave of players surging forwards to get on the end of their diminutive captain’s brilliant crosses and through balls, which in 2017 finally earned him international recognition.

Playing either as one of the front pair or as the link man between midfield and attack in Atalanta’s 3-5-2, but always with the freedom to dart one way and another, appearing in the areas where he felt he could cause most damage, Gomez was the catalyst for last season’s run to the Champions League quarter-finals and the back-to-back third-place Serie A finishes that fell either side of it.

In the European round-of-16 first-leg against Valencia, a game that unfortunately contributed to the terrible impact the coronavirus pandemic had in Bergamo, Gomez put on a masterclass, drifting left and setting up chance after chance as Atalanta ran out 4-1 winners.

In their first ever Champions League knockout game, Atalanta turned on the style and put four past Valencia 🔥

And as if being a creative genius was insufficient, he did it all wearing personalised captain’s armbands featuring Tamagotchis, Gameboys, the video rental chain Blockbuster, and all sorts of other throwbacks to the early-noughties. Hero.

This season, though, Gomez’s love affair with Atalanta came to a painful end. An argument with Gasperini at half time of their 1-1 draw with FC Midtjylland in the Champions League created an irreparable rift.

Gasperini accused Gomez of “not adapting to the changes” that he wanted to make to the team. Gomez responded by posting on Instagram, saying to his fans: “When I leave, you will know the truth about everything.”

That big reveal is yet to happen, but Gomez is gone. Atalanta’s loss is Sevilla’s gain.

There is a currently a great deal of fan and media focus on the benefits of signing for the future and ‘project building’, a phrase that can mean anyone can interpret in the way they see fit.

In Gomez, Sevilla have gone in the other direction, bringing in a man who can solve a problem of the here and now, bringing that extra little bit of imagination and artistry to an otherwise highly competent, hard-running but slightly technically limited side.

With Papu, Sevilla will be a serious threat. Barcelona and Real should be looking over their shoulders.