Paul Ifill on ‘unbelievable’ Millwall & his love-hate relationship with Warnock 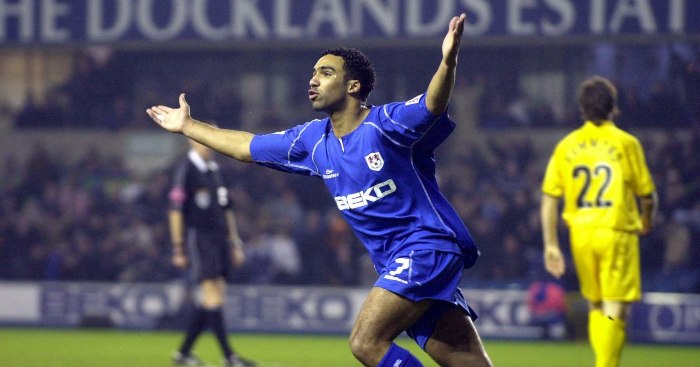 Playing in an FA Cup final is a dream for so many aspiring footballers, but one that very few ever get to realise. For those outside of the Premier League elite, it can feel completely removed from the realms of possibility.

But in 2004, Paul Ifill walked out at the Millennium Stadium as part of a Millwall team tasked with beating the formidable Manchester United. The scale of their challenge was clear before kick-off.

“Just standing in the tunnel and looking across and you’ve got Ryan Giggs, the Nevilles, Roy Keane and Ruud van Nistelrooy – legends of the game,” Ifill says. “To be on the same pitch and have that experience was amazing. Over 70,000 people there – a sea of blue – and to play in front of your own fans was magnificent.”

It was a historic occasion, Millwall’s first ever appearance in an FA Cup final, and they acquitted themselves well, even in defeat. United broke their resolve shortly before half-time, Cristiano Ronaldo heading in from Gary Neville’s cross, and Van Nistelrooy grabbed a brace in the second half.

“Roy Keane controlled the game without hardly breaking a sweat. I’ve always been a fan of Ryan Giggs, so it was nice to play against him, but on the day Ronaldo was sensational. He’d been in and out that season, but he showed people what he could do that day. 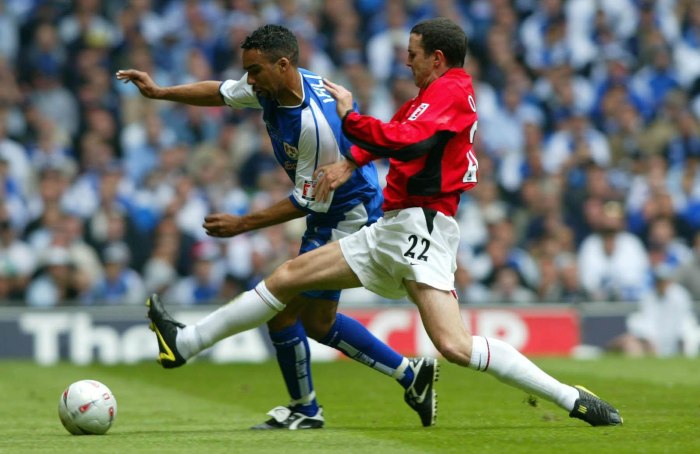 Playing in such a prestigious match was the culmination of a successful period for Millwall, as a mix of talented prospects and experienced veterans came together to lift an ailing club out of trouble.

Unlike many of his team-mates, Ifill had taken a different route into the professional game after being released by Watford. He joined his father’s former team, Saltdean United, and was standing out in the world of men’s football at the age of 16.

“I was just playing with my friends, but I never gave up hope of potentially making it,” he says. “Obviously, it’s a lot more difficult when you’re not in an academy and on that pathway.

“I was offered a trial at West Ham, Portsmouth, Newcastle and Millwall. I went to the West Ham trial first and I did really well. I scored a hat-trick in my first game and I scored another one in my second game.

“I thought I’d done well enough to get a contract, but they said, ‘Look, you’re no better than what we’ve got.’ I look at the teamsheet from that day and it was Frank Lampard, Rio Ferdinand, Joe Cole. The list was ridiculous, so they were absolutely right.

“I ended up going to the Millwall trial and I was pretty poor actually. After the game they told me that they’d give me a year’s YTS. I didn’t really understand how they were signing me on the back of that trial.

“They said, ‘We’ve done our homework, we’ve been watching you over the last few weeks. We knew this was going to be too difficult for you’ – it was a reserve game – ‘but we just wanted to see if you had the right attitude and you did.’”

‘A given that you worked hard first’

Ifill signed for the Lions in 1998, when they were at a particularly low ebb – not long out of administration and struggling in the third tier. Theo Paphitis had taken over and money was tight, leading to more opportunities for young players.

“It’s an unbelievable club and I arrived at the right time. There was no money at the club and they had to rely on the youth. It just so happened that they had a very good chief scout, a very good youth system and a lot of us came through at the same time.”

Alongside Ifill there were a clutch of other promising youngsters, including Lucas Neill, Tim Cahill and Steven Reid. They all flourished with the support of the squad’s senior figures and a passionate fanbase.

“It was a good club to start off at,” Ifil says. “If you didn’t have the right mindset, you were never going to work there. The fans demanded 100% all the time. They didn’t mind what sort of ability you had as long as you worked hard.

“I think that stood us all in good stead as we went on in our careers. It was just a given that you worked hard first.” 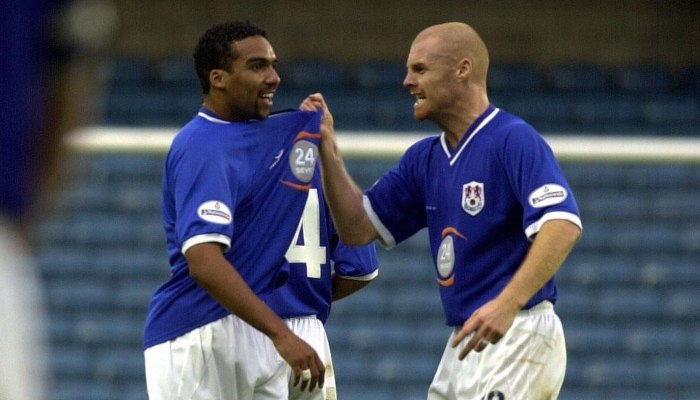 Millwall’s fortunes improved and they won the Second Division title in 2001, with Ifill scoring seven goals in 34 appearances. They took to the level above with ease too, reaching the play-offs.

“It was a great period because you were just playing with your mates – a lot of the guys I came through the youth team with. You’re playing games in professional football and winning every week. We felt pretty much invincible,” he says.

“Most of us were 19, 20, 21. We were getting to do something we love and we were winning most weeks in a league that we felt we were better than, I suppose. We all felt that we could play at the next level up at that point, and we duly did. We got promoted and the following season we finished fourth.

“I think it had a lot to do with the coaching. Mark McGhee was instrumental in getting the characters in the dressing room right. The environment was correct and we just all played for each other. The senior players were spot on and understood that us younger players needed a bit of guidance.”

Across the course of seven years at the club, Ifill became a fan favourite. He played more than 200 games for Millwall and was keen to add to that total, but the owner had other ideas. In the summer of 2005, a year on from featuring in the FA Cup final, he was told that the club had to sell him.

Ifill joined an ambitious Sheffield United for £800,000. The Blades had been pushing to return to the Premier League for several years and had never quite made it.

“I went up and met Neil Warnock and he said, ‘You’re the last piece of the puzzle. If I get you, we’ll get promoted to the Premier League this season.’ He made me believe it. He made me feel wanted.

“The minute I got into the new changing room I realised how good they were. We were geared up and ready to go.”

With Ifill on board, Sheffield United won promotion at the first attempt, finishing second behind Reading. Unfortunately, the winger’s time at the top level would prove to be short-lived, with Warnock choosing to move him on in the January transfer window. 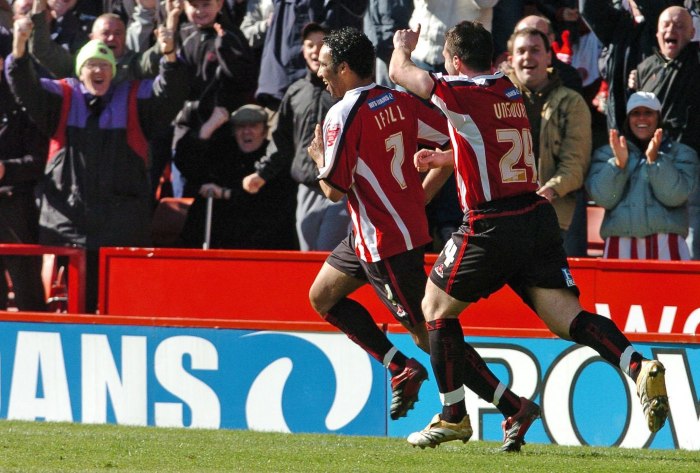 “Ultimately he didn’t think that I was good enough for the Premier League. I disagreed with him at the time, when I went to Crystal Palace, but he was probably right.

“I wanted to go because I wasn’t playing. I was disappointed that I didn’t get more of an opportunity, but I thought I’d go elsewhere, to a club that’s ready to get back in the Premier League and make sure that next time I hit the ground running. Obviously, it never happened.”

Ifill would later be reunited with Warnock at Selhurst Park. For better or worse, Warnock’s verdicts were often blunt. Sometimes brutally so. He told players exactly how he felt about them.

“I think I appreciate him more now than I did then. I’ve always said that I want a manager who’s honest and he was. I can’t think of a time that he ever lied. He always told me straight that if I wasn’t doing the business I wasn’t in the team.

“I didn’t always agree that he was right, but he didn’t lie. When I left Palace, I didn’t have the best feelings for him, but as time goes by, I sort of understand what he was trying to do. He was trying to get the best out of me. 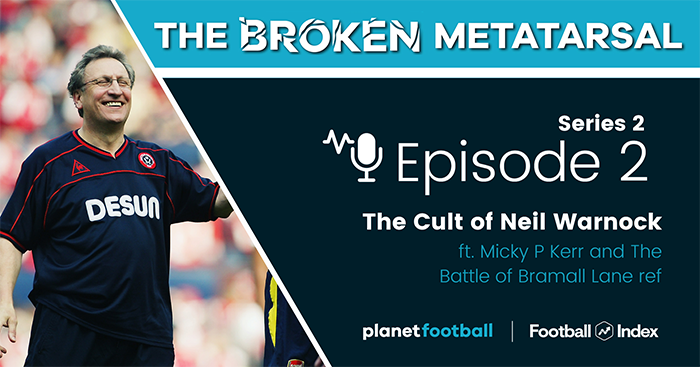 LISTEN: The cult of Neil Warnock & the Battle of Bramall Lane – The Broken Metatarsal

Warnock can often seem enigmatic. Charming at times, and abusive at others. A capable manager, but also a crude one. As far as Ifill is concerned, he had clear strengths and weaknesses.

“He’s not great tactically. He gets his teams set up and he makes you feel good. If you’re in his team and he likes you, you’ll run through brick walls for him.

“That season that we went up, we were organised and we knew our jobs. We stuck together and that’s what got us through.

“That’s probably why he’s never quite been a top Premier League manager. I think he’s got the man-management side of it. He’s a good Championship-level manager, but in the Premier League you’ve got to have that little bit extra tactical nous and I’m not sure he has.”

At Crystal Palace, injuries were a constant torment for Ifill. He was struggling to play on a consistent basis and decided that a change of scenery was required. Turning down the offer of a contract extension, he looked at clubs in America and Australia, eventually signing for Wellington Phoenix.

“It was what I needed. It was slower; I was allowed more time on the ball.” he says. “I just felt stronger and quicker than most because of what I’d been used to. It was a lot easier for me and I suppose that showed in my performances.”

He was a regular at Phoenix for six years, and still plays at a semi-professional level now, despite turning 40 last October.

“I keep saying to myself that I’ll just do one more year. A lad I used to play against, Jamie Cureton, is kind of my inspiration. I think he’s four years older than me. If he’s still playing and he’s still scoring, then I’m going to keep on going. I’ve got a few more years left in me hopefully.”

Looking to the future

After more than a decade on the other side of the world, Ifill and his family are well settled in New Zealand and have no plans to return to the UK.

“We’re still here because we love the lifestyle. It’s very laid-back. There are a lot of cool people and Wellington’s a beautiful city. We live just outside it now.

“People don’t understand what it’s like until they actually get here. I’ve had a lot of people come out to visit and end up staying.”

In 2014, Ifill set up his own academy, with centres in Nelson and Masterton. Proud of the experiences and memories that a life in football gave him, he enjoys sharing his insight with youngsters and seeing where that takes them.

“Two years ago we produced our first professional out of the academy. That was just as proud a moment as me signing my first pro deal. I was over the moon with that. I suppose you’re just trying to find those moments throughout your life that make it worth living and give you that buzz.

“That’s what I’m still doing. I can’t play at the level I used to but the thought of being able to guide somebody, in some way, shape or form, to realise their own dreams is pretty cool too.”