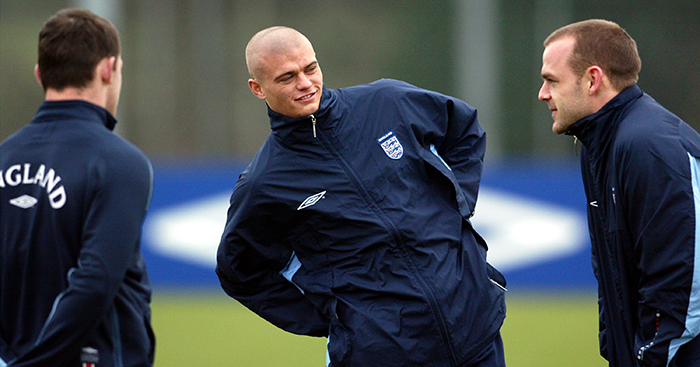 Paul Konchesky spent the vast majority of his career in the Premier League – but the former Charlton, West Ham and Fulham left-back admits he questioned whether he was good enough when called up to represent England.

He believes he may have won more caps were it not for the fact he was competing for squad places with Ashley Cole and Wayne Bridge, but he still describes it as a “dream come true” to have pulled on an England shirt at all.

And he provided an insight into what it is like stepping into the England set-up for the first time, in Konchesky’s case as a Charlton player, on the latest episode of The Broken Metatarsal podcast, in which we remember the highs and lows of the Golden Generation.

“Growing up as a footballer, it’s everyone’s dream to play for their country,” he says. “I was lucky enough to do it at most levels but not at senior level until that call came. It was a massive dream come true.

“It’s exciting to get the nod but very scary. You play against these players but not with them. Everyone sets standards, but when you’re playing with the likes of Beckham, Scholes and Rooney, their standards at their club are obviously a lot higher than where I was playing so to try and make them happy was a nerve-wracking time for me but one that I really enjoyed.

“To train with them every day was a massive thing for someone like myself to go and test myself against the best.”

Konchesky says all the big-name players were “welcoming” when he was first called up to the squad, but he also knew that he would have to step up to their level in training or be judged and admits it was hard not to let self-doubt creep in.

“The training, you can imagine the tempo, it was always at 150mph, and the standard was unbelievable,” he says. “You have to get up to that mark because you don’t want to look the bad one.

“You have to get up to their standards straight away or they probably wouldn’t welcome you back.

“You look at yourself and think, ‘Should I really be here with these players?’ But you’re there and you have to make the most of it. You’re there on merit because the manager has picked you for a reason.

“They had a big aura about them and I did sometimes think to myself, should I have been there, but it was obviously a proud thing for me and I loved every minute of it.”

Cliques in the camp

Several of England’s major players from the Golden Generation have since suggested one of the main reasons they failed to win anything during that period was that the club rivalries were so fierce at the time that the squad was not truly united on England duty.

And Konchesky said even he didn’t mingle as much as he could have done as a new call-up, sticking close to his Charlton team-mate Scott Parker ahead of his debut cap against Australia in 2003.

“Me and Scotty roomed with each other at Charlton when we were 16 so we grew up together,” Konchesky says. “It helped us going in together but maybe didn’t help us because we stuck together.

“But you stick to what you know and get cliquey with certain people and try to stay with them so you feel welcome.

“At dinner time you’d sit on a big table and have Man Utd boys at one end, Liverpool down the other and the rest just mingle in. Does it affect you on the pitch? I’m not too sure, but in and around the building that’s how it was.

“It’s probably nothing like that now because they’re all young kids and all know each other outside of football, they all get on like houses on fire, so it has moved on, but at that time it was a bit cliquey.” 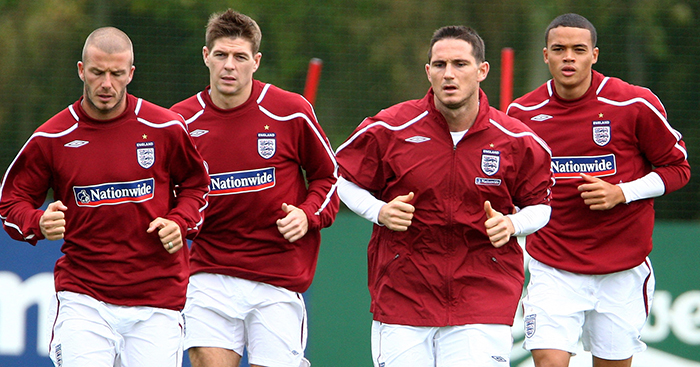 Alongside Konchesky, who also revealed nobody was allowed to leave the dinner table until the captain dismissed them, a certain Wayne Rooney was one of the other new call-ups for that Australia game – and Konchesky says it only took one training session to realise England had a special player on their hands.

“He was 17. You could see that he was going to go on and be one of the best. How you see him on a matchday, aggressive, that was how he turned up for his first England training session with the big players.

“He’s got that mentality that all he wants to do is win, you can’t take it out of him. A lot of people would say there’s not enough of that nowadays, but you watch him now for Derby and he wants to win football matches.

“He’s still playing at 35 like he was at 17 so fair play to him and I think that’s why he’s achieved what he has.”

Konchesky also has nothing but good things to say about England’s coaching staff at the time and, rather than regret the fact he only won two caps, he remains immensely proud to have represented his country at a time when Ashley Cole and Wayne Bridge were ahead of him in the pecking order.

“The man-management with Sven was really good,” Konchesky says. “He had a lot of time for every individual on and off the pitch.

“And he had Tord Grip who coached with him and Steve McClaren, who was one of the best coaches I ever worked for on the training ground.

“Sven was really good for me and I spent a good two years with him at Leicester as well.

“I’m gutted that I didn’t get more caps, but I’m over the moon that I got to play for my country, it was a massive privilege for me.

“You always feel that you’re good enough and you’d always hope that you’re going to get another cap, but I had two of the best left-backs that I was competing with roughly around my age. Ashley Cole won over 100 caps for England so you can’t complain when you’re competing against someone like that.

“I would have loved to have played more, but I had two good ones in front of me. If the chance would have come I’d have jumped at it, but it wasn’t to be and I’m happy I got to play twice for my country.”

To hear more from Konchesky about what it was like to join up with the Golden Generation, listen to the full episode of The Broken Metatarsal below.

You can also find us on Audioboom, Apple Podcasts, Spotify, CastBox, Deezer and RadioPublic among other providers, where you can hear plenty more episodes in which we celebrate the best of noughties football.