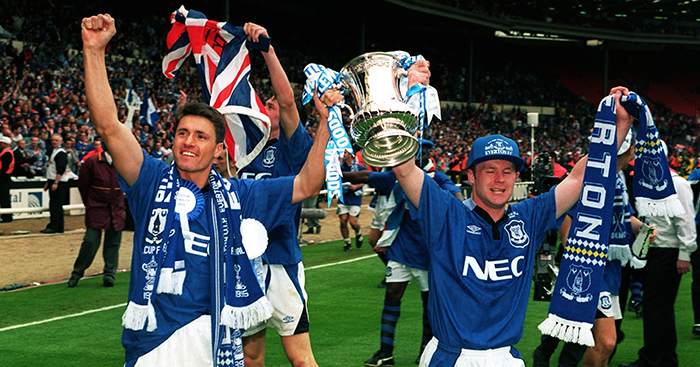 Paul Rideout played for 13 different clubs in a 22-year career – and he experienced enough drama in his five years at Everton alone to fill a book’s worth of stories.

Having broken through at Swindon Town, Rideout went on to play for clubs including European champions Aston Villa, Bari in Serie A and Rangers in Scotland before joining Everton in 1992 – and then clubs in China and America after leaving Goodison Park in 1997.

But it’s his time with the Blues, for whom he scored the winning goal in the 1995 FA Cup final, that he is best remembered. But, joining from Rangers just before the start of the first Premier League season in 1992, things did not get off to the best of starts.

“I just wanted to play and Everton were such a huge club,” Rideout says. “Howard Kendall sold me on the movie. He laid it all out; how we would play and what he wanted me to do.”

In just over a year, however, Kendall would be gone, resigning in December 1993 following a run of poor results.

Rideout had long since begun to sense change was afoot at the club, who had enjoyed such a golden spell in the English game.

“The old guard were leaving. Players who had done an unbelievable job were moving on. You wondered how you could replace players like Graham Sharp. There were a lot of changes.”

In Kendall’s place came Mike Walker, who had impressed with high-flying Norwich City in the first two seasons of the Premier League.

But Rideout makes no bones about his disdain for Walker.

“He’d come from Norwich and on paper he had done well, but he’d inherited a very good team.

“Everton fans expected certain things. He was not a hard-working coach, let’s put it that way. 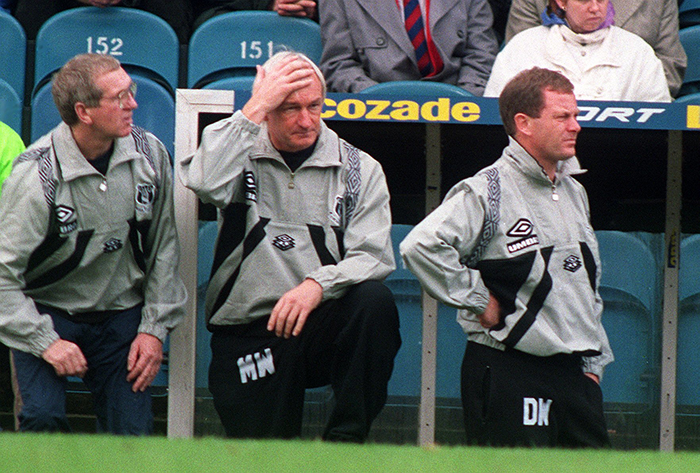 “I’ve said enough about him over the years. He wasn’t well-liked in the dressing room. That wasn’t any particular person either, that was the whole squad. There was just a feeling he wasn’t right for the job.

“When you look at how long he lasted, that tells you everything you need to know.”

Walker was still in charge when Everton faced Wimbledon on the final day of the 1993-94 season.

It was a game the Toffees had to win in order to have any chance of staying up.

Rideout, more than 25 years later, still vividly remembers the build-up and atmosphere on the day.

“We weren’t allowed to take our cars to the stadium. We went down on a bus. It was a one-off game we had to win. I’d never known an atmosphere like it. It was just unreal.”

Even so, Everton found themselves 2-0 down after just 20 minutes with the prospect of a first relegation in 40 years looking increasingly likely.

But the Toffees rallied, buoyed on by the home support who maintained the feverish atmosphere throughout the game

“The fans really got behind us. They could have easily destroyed us. At 2-0 down some teams, their fans would have given up. But they didn’t and that was the difference. We just didn’t feel we could let the fans down”

Within four minutes of going 2-0 down, Everton were back in it with Graham Stuart converting a penalty to reduce the arrears. He would go on to bag the winner, with a goal Rideout happily admits was a little “fluky”.

Not that he cared by the time the final whistle went.

“That is the scariest, most exciting and most thrilling game I’ve played in,” he says.

“At half-time, we were down.

“The feeling afterwards was better than the cup final because it meant more.”

Though Walker clung on, he was relieved of his duties the following season after a run that saw Everton fail to win a league game until November.

In his place came Joe Royle, who brought about an almost immediate turnaround.

“Joe’s man-management was superb. He had this knack of making everyone feel great,” Rideout says.

“His assistant Willie Donachie was a great tactician too. He organised our shape so that we went into games with a plan. We pressed high. Everyone knew their job”.

The contrast with Walker was night and day.

“There was a belief again whereas, before, it was just an utter embarrassment.”

There was one positive from the woeful Walker era though – the signing of Duncan Ferguson, a player Rideout rather surprisingly describes as a “gentle giant”. 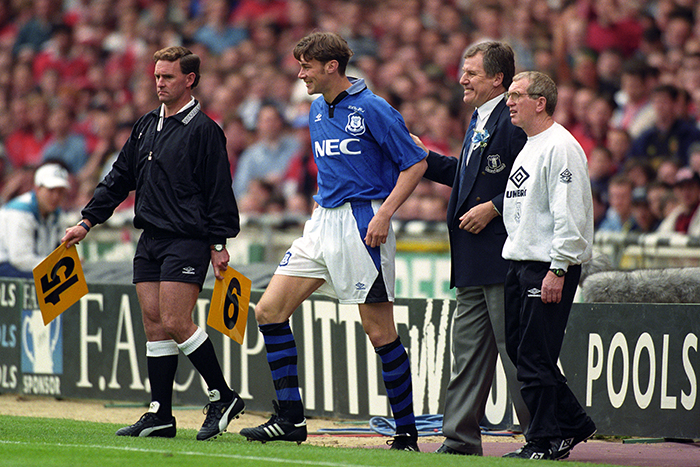 QUIZ: Can you name Everton’s top 30 goalscorers of the Premier League era?

“He was a young kid who came from Rangers and needed a break from Scotland where he’d been in a lot of trouble. Duncan worked so hard and was ideal for the system Joe wanted to play.

“But he scared you to death. Probably the best I have ever seen in the air. I remember him running Steve Bruce and Gary Pallister ragged. He dominated them. It was more than that though. He was a great passer and a good touch for a big man.”

While Everton’s form improved in the league, the team also enjoyed a memorable run all the way to the FA Cup final.

Their run to the final that remains the stuff of legend among Toffees fans, not least for their impressive 4-1 win over a Tottenham side featuring Jurgen Klinsmann in the semis.

It was a game that became infamous for an incident that saw Nigerian striker Daniel Amokachi sub himself on for Rideout before going on to score the two goals that sealed victory. 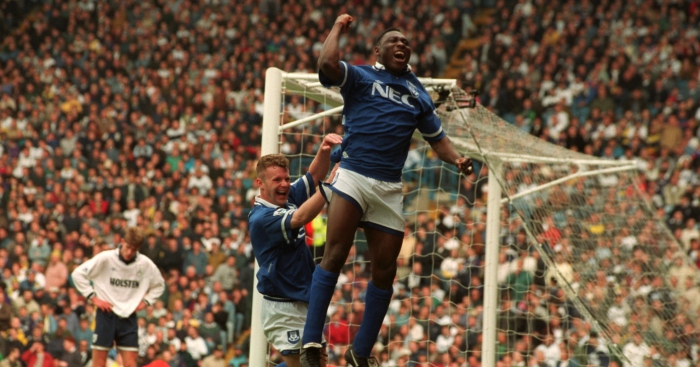 READ: An ode to Daniel Amokachi, Everton cult hero and the best sub never made

Amokachi’s antics have become the stuff of legend in the years since and Rideout is happy to report it’s all true.

“I had had a problem with my knee and wasn’t sure if I was going to be able to play in the final. So they took me off for a second to have a look at it.

“I was talking to the physio when the next thing I know, Daniel is on the field.

“But that was just the kind of guy he was. He just wanted to be on the field. Really, in hindsight, I probably would not have been able to continue. So, it was the right thing to do.

“It was weird though because the next minute I looked up and he had the ball in the back of the net.”

By then, the initially seething Royle had begun to see the funny side.

“I remember he had a big smile on his face.

“Afterwards, in the dressing room Joe was just like ‘Daniel, I didn’t give you the instruction to go on, did I?’ ‘No coach, no coach’ but after two goals, what can you say?

In any case it gave me the opportunity to rest up. I didn’t play too much before the final.

‘It was just timing’

Everton met Manchester United in the final, with the odds stacked firmly in favour of the Red Devils. But, as Rideout recalls, the Merseysiders went into the game with a newfound sense of confidence.

“We’d secured our Premier League survival. Everything else became a bonus. We just went there and enjoyed it.”

On the half-hour mark, Rideout etched his name into Everton and FA Cup history.

Part of a neat Toffees counter-attack, the striker was the right man in the right place to pounce on a Graham Stuart shot which rebounded off the bar.

A tricky enough header, Rideout was also having to deal with an aerial challenge from Denis Irwin.

But he kept his cool, dispatching a chance others might have snatched at.

#OnThisDay in 1995, @Everton won The FA Cup thanks to a single Paul Rideout goal against Manchester United.pic.twitter.com/k3vA9R2nRN

Not that he’s willing to give himself that much credit.

“It was just timing. There was no pace on the ball. I just watched it all the way onto my head and directed into the only spot that was available and it just worked out.”

Though Rideout scored the crucial goal, he credits the Everton rearguard for the win.

“Manchester United dominated the second half but our defence was just brilliant. Neville Southall was the man of the match. He kept us in it. We took advantage of the chances we had. We didn’t have too many. It was a great day.”

That goal alone was enough to secure Rideout’s legend.

After helping Everton pull off one more relegation escape in 1997, he headed to China for a new adventure before hopping over to Sporting Kansas City in America, where he now coaches soccer.

Everton have not won another trophy since that memorable day at Wembley and Rideout’s memorable goal.

But as important as it may have been, he believes he’s scored better.

“It’s not my favourite goal but it’s probably my most important goal.

“I scored better ones. I remember scoring from 35-yards for England schoolboy vs Scotland – who we hated. That was probably my favourite.”

In all fairness, it was a belter.

Paul Rideout scores a hat-trick for England Schoolboys at Wembley in a 4-5 defeat to Scotland in 1980, the 3rd is a screamer! pic.twitter.com/CUPZun6MGL