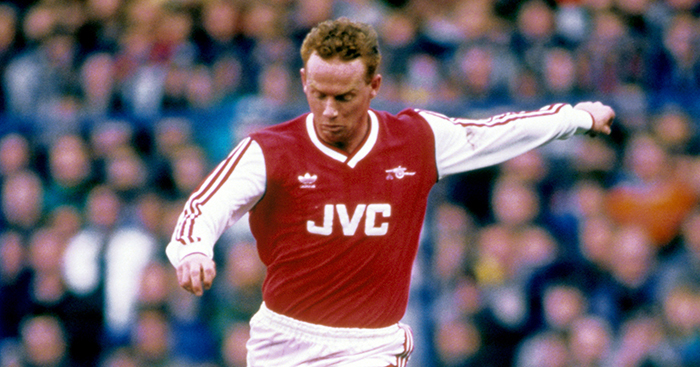 Perhaps more than anyone else, Perry Groves has Arsenal in his blood.

The winger made 155 league appearances for the club between 1986 and 1992, following in the footsteps of his uncle Vic Groves, who captained the side in the 1950s and 60s, and he remains a passionate Gooner to this day.

His name is still sung at The Emirates, with Yellow Submarine repurposed into “We all live in a Perry Groves world” and every number from 1 to 12 assigned to the winger – though older fans know that No.7 is reserved for Liam Brady.

But despite playing in two League Cup finals and winning two league titles, including an appearance in arguably the most famous day in English club football history when Arsenal snatched the trophy from Liverpool on the final day of the season in 1989, Groves’ biggest personal achievement was being given his own broom.

To understand the significance of this, we first need to take a step back.

Groves was at Wolverhampton Wanderers as a youth player, but when he was 16 he received the devastating letter every young footballer dreads: the club had decided not to keep him on past youth level.

He says: “Everybody just thinks that when you’re a footballer you’re successful all the time and everything’s all gravy. But very few footballers get to a top level without having any knock-backs or, in inverted commas, ‘failures’.

“I got released by Wolves when I was 16 and I thought my world had finished then – they were a big club then, they were in the first division. 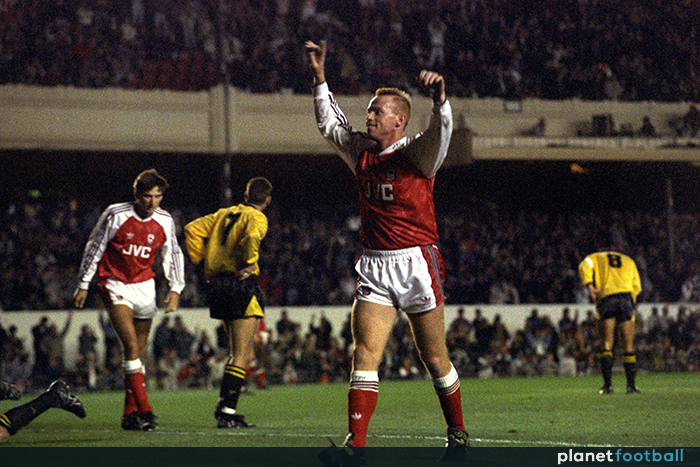 “But my dad always instilled into me this saying: ‘there’s no such thing as failure, there’s not succeeding the first time’. What that means is that everybody has a knock-back, and it’s how you react to that and how you work that counts.

“If you really want to do something you can achieve it. What I say to my two boys is that you’re going to get obstacles in the way.”

True to that principle, Groves reacted to his release from Wolves by going on trial at as many clubs as would see him, eventually earning a deal with fourth-tier Colchester United.

“When people say ‘you’re not good enough’, you have to have the self-belief to go: ‘yes I am’, but you have to work at it,” he says.

“Getting presented with my first broom, that was my biggest achievement, because when you were an apprentice at Colchester you got a broom to sweep up the terraces.”

He was George Graham’s first signing and, as you would expect from his never-say-die attitude, he endeared himself to both his manager and the fans with his gut-busting style.

“Don’t get me wrong, I got booed numerous times at Highbury,” he laughs.

“It’s amazing how much of a better player you become when you’ve packed in – people watch the YouTube clips, and they don’t show your misses, do they?

“But I think probably fans identify with me more because they knew I was an Arsenal fan myself from my family history, with uncle Vic being captain in the 1950s and all my family being Gooners.

“They probably looked at me and thought ‘right, if I had a chance to play for Arsenal, I’d have to play like Perry Groves does’.

“They couldn’t look at Thierry Henry and think ‘I’d play like Thierry Henry’, because he could do things that nobody else on the planet can do. They would like to be able to do what he did, but they know that they couldn’t.

“Thierry is quite rightly an idol, a legend, because he was born with a talent, whereas I was born with a little bit of talent but had to add to that with work-rate and effort and heart.

“All good teams are made up of both types. When I played and we only lost one game in 1991 we had flair players in the team like Anders Limpar, Paul Merson and Michael Thomas, but they need the runners.

“When it was [Patrick] Vieira, [Emmanuel] Petit, [and Marc] Overmars, you had Ray Parlour who had that energy and work ethic up and down the right hand side that allowed everybody else to play.

“You need to know your role as well: I think these days a lot of players get carried away with themselves and think they’re better than what they are, whereas I knew my role was to run around and be a bit of a nuisance.”

For those of you who need a recap, Arsenal travelled to Anfield on the final day of the 1988-89 season sitting three points behind Kenny Dalglish’s Liverpool. Arsenal’s only hope of winning the title was to claim victory by at least two clear goals.

It’s hard to overstate what a behemoth Liverpool were at the time. They had won four European Cups and nine league titles in the previous 13 seasons, had beaten Everton at Wembley in an emotional final to claim the FA Cup, and had conceded just 18 goals in their previous 38 home games, losing just twice. Regardless of how good Arsenal were, teams just did not win 2-0 at Anfield.

But that’s exactly what they did, with Michael Thomas dramatically scoring Arsenal’s second goal in the 91st minute to take the league title to Highbury for the first time in 18 years.

The celebrations continued long into the night: “We didn’t get back until about 2:30 in the morning because there was a flotilla of cars down the M6 with all the Arsenal fans, which was brilliant.

“There were no mobile phones, but we got wind over the police radios from one of the police motorcyclists to our coach driver that they’d kept a nightclub open for us: it was called Winners, ironically, in Southgate.

“When our coach got there with a police escort, they dropped us outside and there must have been 3,000 people there. We were like The Beatles getting off the plane at JFK airport when we got off the team coach!

“I think we ended up getting out at about quarter past six in the morning.” 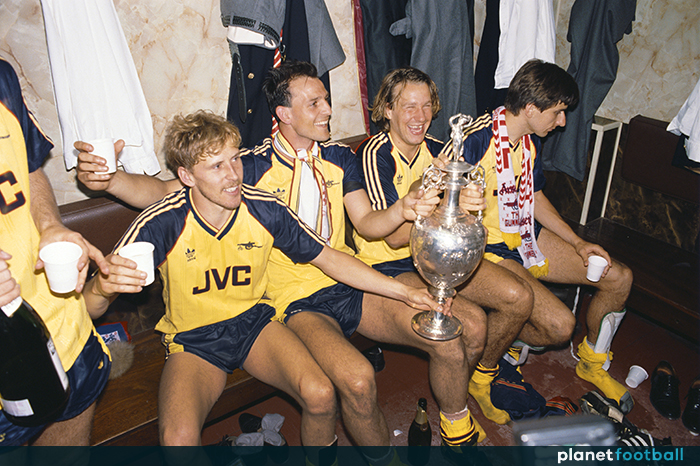 Groves’ instantly-recognisable ginger hair is long gone now, but the former Gunner has kept himself in the game. He now runs Play With A Legend, which is an events company and agency finding commercial opportunities for former players, originally centred around giving football fans the opportunity to play alongside one of their heroes, followed by the vital post-match drink at the bar, of course.

Groves says: “The Play With A Legend concept started when a friend of mine, Josh Landy, who’s my business partner, had a stag weekend for friend who’s a massive Arsenal fan. They were playing 11 a-side at Chesham United’s ground on a Saturday morning when the season had finished and Josh asked me if I’d go and play and bring Nigel Winterburn with me!

“I said ‘I’d love to, it’d be my pleasure’, so it was a surprise for the stag with a big reveal – they were in the changing room and we came in. I think at first he thought I was Phil Mitchell when I walked in, but then he got through the weightage!

“We played a match then went in the bar afterwards and had a few pints. Obviously they were keen to ask a few questions, we told a few stories, and there was a real feel-good factor. 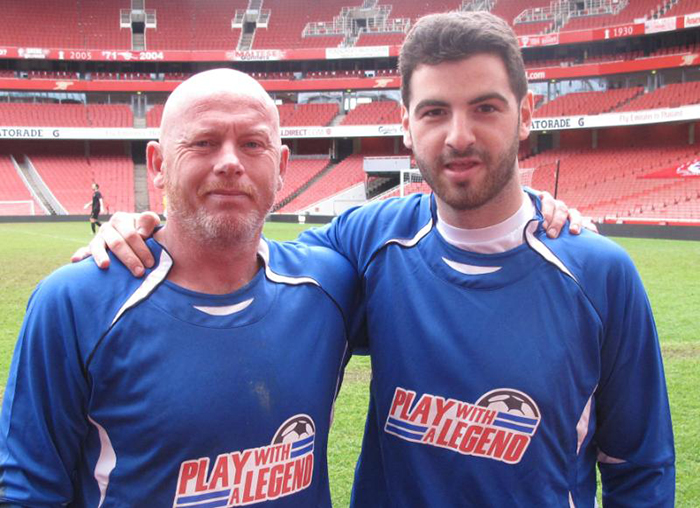 “A few weeks later, Josh arranged for Steve Sedgley and I to play again in a Tottenham-Arsenal split stag, that worked really well, and after that we sat down and said ‘there’s definitely a concept and a business here’.

“So with my links with all the players and Josh’s business qualities and know-how of marketing and the internet, we decided to give it a go. So I got in contact with a load of ex-players, and if you look through our website now we’ve got about 90 to 100 ex-players ranging from the 1970s up until modern day, and we’ve held events at venues ranging from 5-a-side centres to Premier League Stadiums.”

“It works brilliantly, and it’s not just the top-end players like Ray Parlour, Darren Anderton, Paul Merson, Teddy Sheringham, Andy Cole – it also works lower down. We had a stag in Cheltenham where we got a lad his favourite Cheltenham Town player. Everybody has their own hero, it just depends what level you’re playing at.

“All of the lads we’ve got, every one of them is a good character, a good lad, where they don’t see it as a chore spending time afterwards.

“We don’t have people turning up going ‘right, I’ve played the game, I’ll give you ten minutes and we’re off’.

“The biggest part is the hour or hour-and-a-half afterwards: the socialising, getting to know the stag lads or the people on the birthdays or the clients for our corporate customers, and all of the players actually enjoy that part of it, because otherwise there’s no point.” 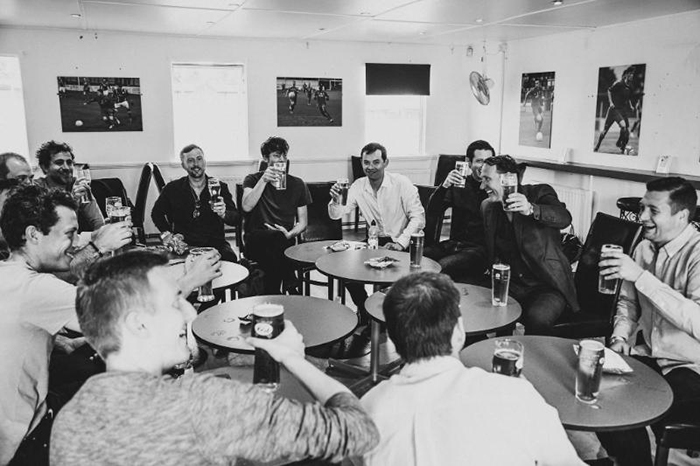 So what’s it’s like to go head-to-head with your childhood heroes? The temptation for both the ex-pros and their opponents must be to try and show off a bit.

“It always starts off for the first 15-20 minutes with everyone wanting the ball and running around, closing down and whatever,” Groves says.

“But there’s always the wow factor. Some players are fitter than others, but it doesn’t matter if we’ve put on a couple of pounds – an ex-player will still do at least two or three things in that six-a-side or five-a-side where then the other players think: ‘ah, that’s it, that’s the difference. That’s why they played at that level’.

“It might be something like Merse [Paul Merson] will chip a goalkeeper from 50 yards with the outside of his right foot, or Le Tiss [Matt Le Tissier] will nutmeg two or three people on the trot or ping a pass first time on the volley. Something will happen every time that one of the players turns up and they always talk about it afterwards. 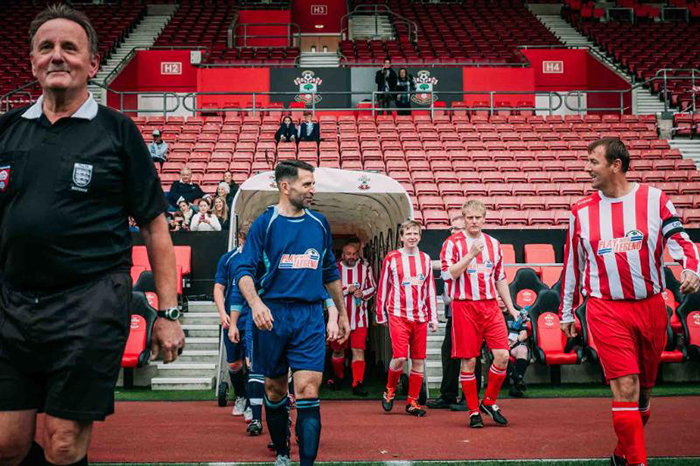 This is just part of the growing interest in Masters football. Liverpool have recently toured the Far East with the likes of Patrik Berger, Robbie Fowler and Ian Rush, and will be joined by Steven Gerrard to take on a team of Real Madrid Legends in a near-sellout at Anfield later this month, while the O2 Arena will hold a six-a-side tournament this summer with Gerrard, Roberto Carlos and Carles Puyol all on show.

Groves says: “It’s human nature with nostalgia that you always look back and think it was better back when you were growing up.

“The era that you grew up in, you always think that’s the best era.”

If you’re interested in organising an event with a football legend for a stag, birthday, corporate or charity event visit Play With A Legend, who will also be offering fans of Southampton, Crystal Palace, Leicester, Wolves and Derby the chance to play on their hallowed turf alongside club heroes this May.