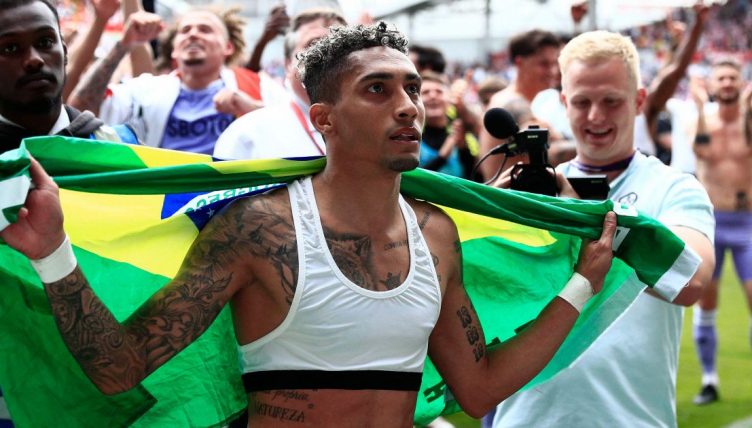 “I always wanted to be like Ronaldinho. The things he did, the way he enjoyed every minute on the pitch… I was transfixed. I felt he gave everyone a promise when he played: give me the ball and I’ll make you smile.”

Let’s face it, that could be any one of us waxing lyrical about Ronaldinho.

If you watched football in the mid-noughties, or if you’ve been anywhere near YouTube in the years since, the buck-toothed Brazilian and the miracles he performed in a Barcelona shirt have burst into your life like a ray of sunshine through menacing clouds.

But those words are not just from anyone. They are from a piece for the Players’ Tribune by Raphinha, who is three things to Ronaldinho: first, a fan; second, a family friend; and now, finally, the man to transport his irreverent spirit right back onto that Camp Nou pitch.

Raphinha is going to Barca, and if you ask us, he couldn’t possibly be a better fit.

Why? Well he has it, that same thing that he saw in Ronaldinho: give him the ball and he’ll make you smile.

It was February 2021 and Raphinha was slap bang in the middle of his first season in England, a first season spent confusing the living shit out of any defender ill-advised enough to go within three metres of him.

The Brazilian got the ball out wide and looked like he was cornered. Cahill probably thought, ‘I’ve got this under control.’

He very much didn’t have it under control.

This Raphinha is mad pic.twitter.com/I2A42csQP5

Raphinha reached up and plucked a piece of skill right from footballing heaven, pulling off a sort of swivelling, spinning, backheel-Cruyff-turn that gets us so excited we can barely even type these words.

If you look closely, you can actually see Gary Cahill deflate as he realises what’s happened and pull the Brazilian to the floor.

The Cahill destruction came just a few weeks after another moment of Raphinha brutality.

Against Brighton, he had almost put Joel Veltman into early retirement with a trick of the mind so confounding it could wipe the smug grin off Derren Brown’s face.

That form at Leeds quickly brought him full international recognition. Was he intimidated? Was he cowed by the pressure of playing for Brazil? Was he heck.

He quickly became the darling of the nation, lighting up a Selecao side that many thought had become too dull with his tap-dancer footwork.

If this is what he did to Johan Mojica, a 29-year-old full-back with a lot of experience in the Spanish top flight, just imagine what he’ll do playing in La Liga every week.

That level of wizardry is just what Barcelona need now. In fact, it’s what they’ve missed since Neymar left.

Yes, Lionel Messi carried on with his incredible goalscoring feats right up until his last day at Barcelona, but as stunning a footballer as he was and is, there has always been a harder, more clinical edge to the Argentine.

Raphinha might well be the man to bring back that Ronaldinho-and-Neymar-esque swagger of the Brazilian stereotype, the sunshine to light up Barcelona’s exit route from their mini-era of gloom.

When you consider Raphinha’s past, though, it’s little wonder he ended up with that same footballing joie de vivre as his idol.

As we said, Ronaldinho was not just an idol to Raphinha but a friend.

In that same Players Tribune piece, he said: “Ronaldinho was born in the community where I grew up, so my dad and my uncles knew him.”

They are both from the Restinga district of Porto Alegre, not an easy place to live. They both grew up playing on the same rough dirt pitches of the Brazilian varzea, where they learned how to enchant the ball, to bring it under their spell.

Aged seven, Raphinha even went to Ronny’s house for his birthday party – a party we’d love to have joined him at.

“I remember turning up at this huge house and seeing him stand at the front door, welcoming everybody and giving out hugs,” he said. “That smile, man. You know the smile.”

That grin must have had some sort of divine effect, imparting a little sprinkling of that magic.

When Ronaldinho urged his compatriot to join Barcelona earlier this summer, it came as no surprise.

“I would very much like him to come,” Ronaldinho told SPORT. “He has a lot of quality, he would fit in very well with Spanish football due to his playing characteristics.”

Not only quality, not only the right characteristics, but the joy. He can bring back a little bit of what Ronaldinho once brought to Camp Nou – and there’s no higher compliment than that.