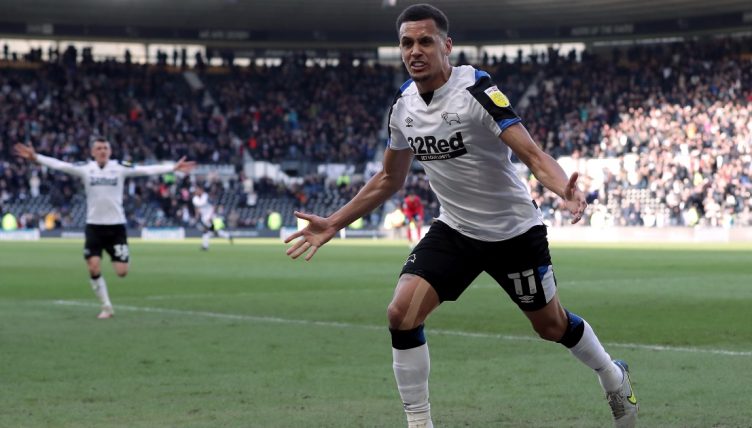 It was the kind of goal that could reignite a season, a club or even a whole playing career.

Derby County have endured a hellish campaign, marooned in the Championship relegation zone with a 21-point deduction for financial misdemeanours and their chances of survival looking increasingly slim.

Not just staying in England’s second tier, may we add. But survival as a football club and cultural institution.

The game was meandering towards an unhelpful goalless draw when Derby’s unexpected talisman popped up with an exceptional winning goal to lift the roof off Pride Park.

The 29-year-old leapt onto a loose ball after Preston failed to clear their lines from a corner and produced a stunning, scissor-kick-style effort that flew into the net.

Derby boss Wayne Rooney was effusive in his praise of the goalscoring hero after the game.

“Technically there is no question whatsoever, his ability is right up there,” Rooney said, before adding: “I left him out of the team, I think for seven or eight games in a row, because I felt he had to work on his discipline and his shape out of possession.

“We worked with him on that, and I think you have seen a big difference out of possession with him. It is no coincidence he is getting that right, and that is allowing him to express himself a bit more in the final third. He is in a great run of form.”

His name? Ravel Morrison. And, judging by his run of four goals in his last five matches, Morrison may finally have found a club to call home and a manager to extract the best from him.

We proceed with caution; it is a claim we’ve heard before. But, with Derby six points from safety and needing a saviour, perhaps this time will be different.

As far as personal endorsements go, this quote from an unnamed member of the Manchester United coaching staff – as reported by The Athletic in 2020 – redefines the word ‘damning’.

Yet, given the turmoil of Morrison’s time at Old Trafford, you can’t help feeling that the patent exasperation was understandable.

Growing up in the club’s academy, he was considered by many to be the youngster with the most potential of any player in any age group.

“The first day I saw him,” Rio Ferdinand once said, “the boss [Sir Alex Ferguson] said to me, ‘Look at this kid, No.7 on the training pitch, come and watch; best kid I’ve ever seen.’

“He trained with the first team at 16 and he was taking the mickey out of the other players.”

United legend Paddy Crerand was prepared to go even further in his assessment of Morrison’s potential.

“Ravel was the best youngster I’d seen since George Best,” he said back in 2017. “Even in a side with Pogba, Ravel stood out. He was fast and had a quick football brain – everything a big star should have.”

But all that potential only resulted in three League Cup appearances for United, amid growing concerns about Morrison’s off-field activities.

“He was actually a nice lad,” said Crerand, who grew up in Glasgow’s notorious Gorbals. “Quiet and respectful. Sometimes when you grow up with a group of lads, some go astray and you don’t. When you’re the one getting a few quid, that can be an issue.”

Upon offloading him to West Ham in January 2012, Ferguson told Hammers boss Sam Allardyce: “A brilliant footballer. Brilliant ability. Top class ability. Needs to get away from Manchester and start a new life.”

Yet it never really happened for Morrison at West Ham either.

Despite paying greater attention to his diet, and scoring a goal-of-the-season contender against Tottenham in October 2013, his time in east London soon came to a murky end amid talk of he refused to sign with the agent Mark Curtis, who long had links with many of Allardyce’s players.

Spells at QPR and Cardiff followed before a surprise move to Lazio in 2015. It may have been a fitting stage for a player of Morrison’s ability but he was unable to break into the first team and was criticised by coach Stefano Pioli for a lack of professionalism in training and an unwillingness to learn Italian.

But intriguing spells at Mexican side Atlas, where Morrison scored four times in 25 appearances, and Ostersund in Sweden indicated that Morrison had grown in maturity.

“I liked him. We’ve kept in contact and I have a lot of time for him” said Ian Burchnall, formerly the manager of Ostersund.

“Ostersund are a small club in the north of Sweden, where he could have come in as a big-time Charlie, but that was never the case. He never missed a training session, never arrived late, never went AWOL. He was polite, he was grateful for everything, he was gracious. There was humbleness.”

That sentiment was echoed by staff at Sheffield United and Middlesbrough, despite Morrison not making much of an impact at either club.

And, at Derby, the 29-year-old is delivering the goods in the manner everybody always knew he was capable of.

But why is Morrison performing so well? Is it because he is now feeling at home?

Asked that very question after the Preston victory, Rooney said: “He is. As I said when I brought him in, Ravel has had issues, and he has always been a bit misunderstood, but he is a really nice lad, a great character around the training ground and an example to a lot of the younger players.

“When I left him out, he trained excellent every day to try and get back in the team and try to improve. I have been delighted with him. This is the most games he has ever played in a season, his attitude has been first class, I am delighted for him.”

Derby have certainly needed him to be excellent. The Rams’ 21-point deduction meant they were always destined to be swimming valiantly against the tide this season but Morrison’s form has given them hope.

He scored twice in a potentially-still-crucial 2-0 win over Barnsley in March – Morrison’s first goals in English football for over a decade – with his delightful dink for the first earning the praise of Gary Lineker, among others, on social media.

🚨⚽️ Ravel Morrison with a beautiful dummy and goal for Derby vs Barnsley pic.twitter.com/dHIPWQI6nz

The four goals he has scored in his last five appearances for Derby make him their second top scorer behind skipper Tom Lawrence.

In addition, Morrison recently found the net for Jamaica when he scored what proved to be the winner in their World Cup qualifying victory over Honduras during the March international break.

It’s a feather in the cap of Rooney, whose blend of tough love and encouragement seems to have resonated with a more grizzled Morrison. Plenty of managers, including Ferguson and Allardyce, never managed to get him playing this consistently well.

The Derby boss acknowledged back in August that it’ll be difficult to keep Morrison at the club, saying: “If I get the best out of him this season, I think it will be very difficult for us to keep hold of him.

“I am sure there will be Premier League teams knocking at the door trying to get him if I get what I want out of him. I have a lot of faith in him. His ability has never been in question.”

Rooney is correct; Morrison’s ability has never been in doubt. It’s only now that the consistency is there too.