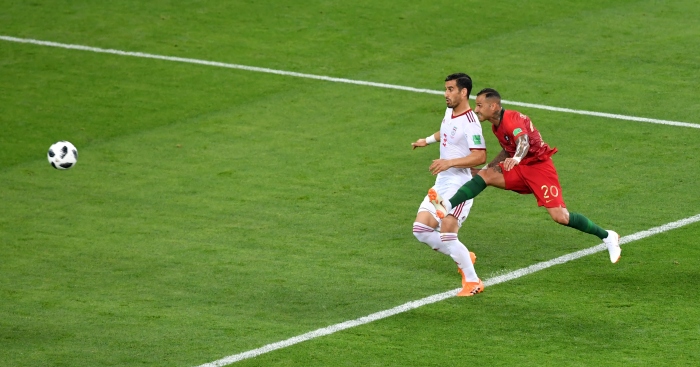 Ricardo Quaresma has made a career out of bending the ball with the outside of his foot. We should celebrate players like him.

When Italians voted Ricardo Quaresma the worst player in Serie A at the end of 2008, few would have expected him to win the European Championship almost eight years later.

In fact, some might have expected the winger’s time at the top to be nearing its end.

Here, among world-class talents like Luís Figo and Zlatan Ibrahimovic, was an expensive one-trick pony who, tragically, didn’t seem capable of doing his trick all that well.

A showboat with lots of talent but a lack of common sense, the Portuguese was exactly the kind of player who might have disappeared into obscurity before turning 30.

Quaresma, however, was not defeated by his underwhelming spell in Italy, nor by a strange loan spell at Chelsea in the middle of it.

Incredibly, he even salvaged his career after spending six months without a club, having failed to demonstrate his worth in the UAE Pro-League shortly before turning 30.

By rights, Quaresma should have been dead and buried long before winning Euro 2016 as a 32-year-old. His first appearance at a World Cup, at the age of 34, should never have happened.

What is most remarkable is how, over a two-decade career that is still going strong, the winger has basically only done one thing on the football pitch anyone cares about.

Despite being a good dribbler of the ball, a respectable scorer of goals and a big personality, the winger has built his career on kicking the ball, impressively but awkwardly, with the outside of his boot.

And it really is awkward.

Unlike Roberto Carlos — whose iconic outside-foot free-kick from 1997 is both technically impressive and objectively beautiful — Ricardo Quaresma has perfected a very similar skill which, even when it comes off brilliantly, looks like a mistake.

It looks like the action of a child who has only ever played throw-and-catch sports and who has decided, instinctively but wrongly, that kicking with the smallest toe must provide greater accuracy than kicking with the big toe.

Ricardo Quaresma is a one-trick pony, and his trick looks silly.

To give it its proper name, Quaresma’s outside-foot kick is called a trivela. However, putting it alongside other Iberian-language tricks like the rabona and elastico might be giving it too much credit.

That’s because the trivela is just kicking with the outside of the foot — not with godlike power à la Carlos, but with a bent ankle and a surprisingly gentle push.

It is, to all appearances, the choice move of somebody who has seen a YouTube video called ‘Roberto Carlos Tournoi Free-Kick 10 Hours Looped’, not focused very hard on it, but decided to devote their life to it anyway.

The trivela sometimes works well, but it is not all that different to just… using the other foot.

When José Mourinho brought Quaresma to Inter in 2008, he talked about the winger’s favourite move — not in glowing terms, but to illustrate his need to learn other things.

“He likes kicking the ball with the outside of his foot, but if you ask me about him in a few months’ time we’ll be talking about a different Quaresma,” was the manager’s assessment, implying that the player would need to develop new, more substantial characteristics to force himself into the team.

“I will never miss out on the chance to use the trivela in a match situation,” he would later confess — his confession booth of choice being, not coincidentally, an instructional video for learning the trivela.

To some extent, the conception of Quaresma as a player who just enjoys kicking the ball in a funny way has stuck with him through the highs and lows.

And perhaps that’s no bad thing.

Because while his use of the trivela was a stick to beat him with at Inter, it has also provided many of his finest moments to date.

His first goal for Portugal, for example, was one of the finest curled strikes of his career. His latest, against Iran at the 2018 World Cup, was another.

Even if he never adds to his 10 international goals — and, at 35, he probably won’t — those are some of the finest bookends one could ask for.

The extent to which the trivela is useful or effective doesn’t really matter.

If 90 percent of Quaresma’s curled attempts produced goals, that would be great. But even if they never did, we would still be getting the chance to witness something fresh, something unique, a player honing a creative skill to the very best of his ability.

What matters is that, in creating something entirely his own, Quaresma has provided years of entertainment that can be found in few other places, becoming a recognisable player with an almost cartoonishly distinctive skill.

It is no bad thing to say that his abilities could be recognised by toddlers. Oh, he kicks it like that, does he? Nice.

The same applies to other one-trick ponies of the game. Rory Delap and his long throw, Kerlon and his seal dribble, Cuathemoc Blanco and his Cuauhtemiña — the very first skill you learned on the playground, the use of which would now see you mercilessly ribbed at the local power league.

Those moves aren’t always essential to winning a match, yet all have provided genuine value to the sport, real ‘wow’ moments that make the game worth watching. In the end, if we judge players by any other metric, we might as well just become accountants and die.

And so, in a decade’s time, we probably won’t remember Ricardo Quaresma as one of the all-time greats. But certain players better than him — players with, let’s say, a more well-rounded skill set — we simply won’t remember at all.

That shows he did something right.

15 of the best quotes on and by Ricardo Quaresma: ‘Life is all about risk’