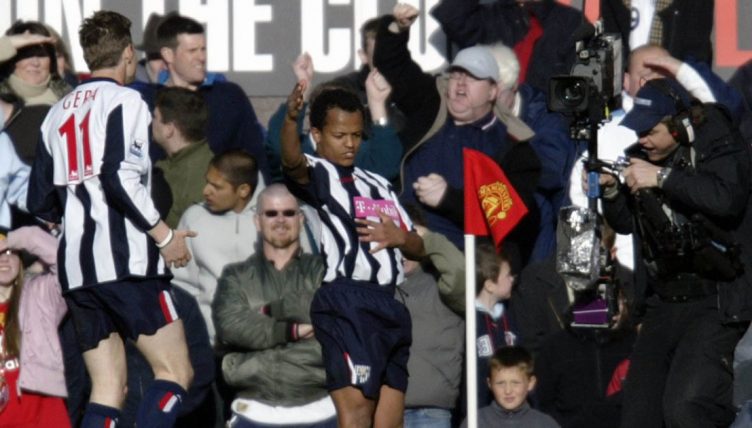 The hardest thing in football is to score a goal, but as Cardiff City and West Brom fans in particular will remember, Robert Earnshaw used to make it look easy.

Each time the net rippled he embarked on his trademark celebration – a big smile and arms spread wide as he launched into a somersault. His joy was obvious, and supporters instinctively wanted to share in it.

“You can be there, and just do a decent job, and not disrupt anything, but for me it’s about the art in your skills, and the craft. It’s the way the goals are scored. The way the enjoyment is felt.

“When I was watching football growing up, it was about the celebrations. Everything on the pitch happens for the purpose of scoring a goal. So when I was doing that, it was about the enjoyment. As a fan, you can feel it. The excitement and the enjoyment that you can’t help but feel when a goal is scored. I wanted other people to feel that.

“I wanted people to understand that when I finish it’s because I’ve put time and hard work into learning how to do it. I wanted everybody to have that connection, so they could feel what I was feeling. That’s what it’s always been about.”

Earnshaw’s passion for football is obvious and infectious. He watched it obsessively growing up, learning as much as he could about players and teams around the world. As a young striker, Romario, Ronaldo, Gabriel Batistuta and Hristo Stoichkov were all influences and inspirations to him.

There were others closer to home too. Earnshaw was born in Zambia, where his parents had met. His mother played football to a good standard, while Kalusha Bwalya, who built a career in Europe and Mexico while starring for the national team, is one of his cousins.

The family lived in Malawi for a few years before Earnshaw’s English-born father, David, tragically died of typhoid fever. Soon afterwards, Earnshaw moved to Wales, along with his mother and four siblings, to be nearer to his extended family. He was just nine at the time and had to adjust to a new way of life.

“It was completely different,” he says. “I guess as a kid it’s easier to get used to things, even if they are very different. There were things like the weather and the number of people. It was just a different culture. It took time to get used to it.”

A love of football helped Earnshaw to fit in and establish himself among his peers. He was picked up by Cardiff City and made rapid progress, scoring for fun whatever the level. At 16 he made his debut. A dream was fulfilled, and it would be the first of many appearances for a club whose supporters embraced him as one of their own.

“I come from a little town in the middle of Zambia. In the middle of nowhere, really. So the chances of me making it as a footballer were tiny. Going into professional football was just a dream. Something I saw on TV. A dream of being in stadiums, playing in front of crowds and making that my life. Making my debut, all of those things kind of come together. A lot of emotions come into that.

“It was amazing because you had to work for it. This was a time when it wasn’t just given to you. To come through as a youngster, you couldn’t just be talented or have some potential. It’s a lot different to now, because you had to do something to get a chance.

“I remember I scored 57 goals in the reserves and youth team in one season. I had over 30 goals by the time I made my debut. That’s what I had to do just to get a place on the bench.

“Coming through at Cardiff was great because of the passion, how the club was and its history. The passionate fans. I had some really good times and really good things happen in my first few years as a professional. I was learning a lot, not just in football but life skills too.” 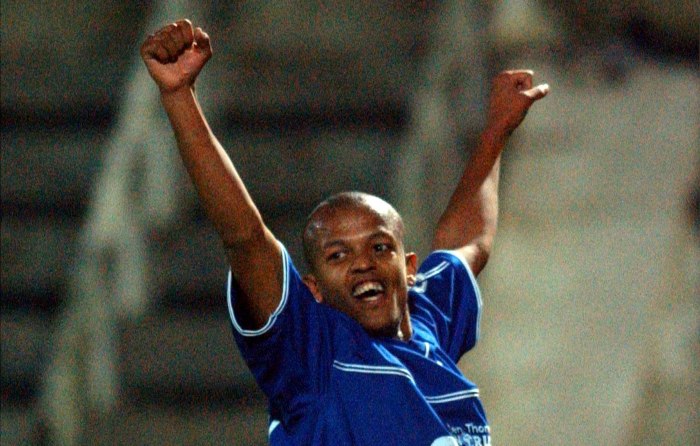 Earnshaw was prolific, scoring 105 goals in 205 games as Cardiff rose to the First Division. After six years in the first team, during which the Bluebirds had turned down several offers for their young star, he finally decided that the time had come to leave. In August 2004, he joined West Bromwich Albion for a club-record fee of £3million.

“Everton were interested at the same time, but something fell through,” he says. “I ended up going to West Brom on deadline day. It came to the point where it was about a new challenge and the dream of playing in the Premier League, and West Brom gave me the opportunity to do that.

“I’d played against Kidderminster Harriers the week before and then I was making my debut at Anfield.”

It was a chance for Earnshaw to test himself against some of the best players in the world, and it turned out to be a special season for both him and the club. He scored 14 goals in all competitions, including a hat-trick against Charlton Athletic in a vital win towards the end of the season.

West Brom completed their great escape on the final day, becoming the first club to stay in the Premier League having been bottom of the table at Christmas.

“It was crazy because it was such a rollercoaster season,” says the former Wales international, who won 59 caps for his country.

“West Brom were a new team going up to the Premier League and trying to find out what type of club they wanted to be. Trying to build the club to have more than one season in the Premier League. There were a lot of these things going on around the club. A lot of difficulties.

“A lot of different players came in at the beginning, and halfway through, but we also had good people. Kanu came in. We had the likes of Riccardo Scimeca and Kevin Campbell, who’d played lots of times in the Premier League. Darren Moore was there. We had a lot of good characters. Big characters.

“It was tough because I think it took until the last couple of months of the season for us to really go as a club. I think we weren’t aiming high enough and we found it tough adjusting to the Premier League. Sometimes we’d go into games hoping for a draw, and not so much looking to win.

“It took us a long time to adjust – too long – but we got there in the end. The celebrations and the achievement of staying in the Premier League were great.” 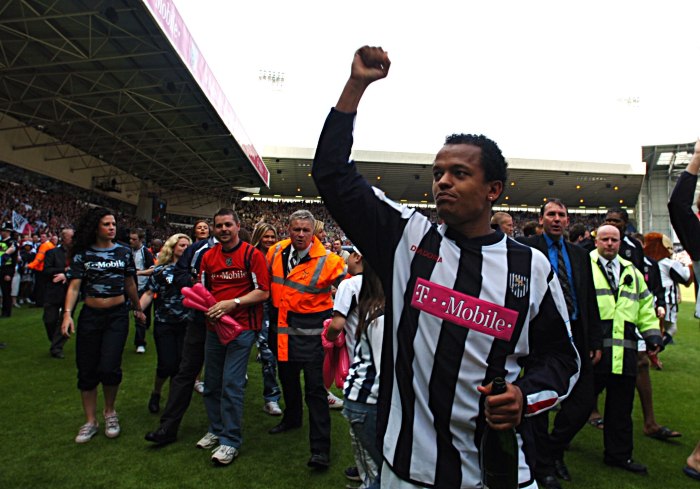 For Earnshaw, his hat-trick against Charlton had added personal significance that he didn’t realise at the time. It was only in his post-match interview that he found out he’d become the first, and so far only, player to have scored a hat-trick in the top four divisions of English football, as well as the FA Cup, the League Cup and at international level too.

“It means a lot. The more I reflect on it, and the more people recognise it, I think I’ve enjoyed it even more. For me, the game is about making an impact and making a difference. I was obsessed with scoring goals. It was always about trying to be the best that I could be. To do that as much as possible, and as consistently as possible.

“To be able to score a hat-trick at every level, and be the only one, I’m very grateful. It gives you a sense of achievement and it’s something that’s very special. I think it would be hard to do again.”

In later years, following a disappointing spell at Derby that featured few opportunities and a humbling relegation from the top flight, then a return to form at Nottingham Forest, Earnshaw sought to broaden his horizons by playing for clubs in Israel, Canada and the USA.

“When I went out of the UK, I learned just as much in a shorter space of time. I think it’s one of the best things that I’ve ever done.”

Heading abroad has benefited Earnshaw as a coach too. He started working in the Vancouver Whitecaps youth system upon retiring in January 2016 before becoming assistant manager of Fresno FC, a new franchise in the United Soccer League.

Now he’s back in the UK and focused on completing his UEFA Pro Licence while considering the next step in his career.

“I’m grateful to still be on the journey of learning and experiencing different things,” he says. “Coaching-wise, I just want to achieve good things. I want to help players and improve players. Give knowledge.

“At the same time, it’s always been about learning. As a player, it was always about learning more. How to be better and learn different techniques.

“I think it’s the same with coaching. Learning how different things are done, but also always trying to be innovative with your tactics, or your ideas, or your training. I think that’s the biggest thing.

“I can’t tell you where I’m going to be in a few years’ time because it’s difficult, but the only thing I do know is that I want to be the best version of myself that I can be.”

‘You just always want to be heard’

With varied experiences across different levels of football, and in different countries too, Earnshaw has a lot to offer. His insatiable curiosity and desire to improve were key factors in his success as a player, and he’s determined to put them to use as a coach.

While the disproportionately low number of coaches from a BAME background working in professional football has long been cited as an issue, little progress has been made. The prominence of the Black Lives Matter movement has once more brought the game’s decision-makers under scrutiny. Earnshaw simply hopes that his ideas and experience give him a fair hearing.

“I don’t know exactly how employers and people in those situations think. I can only say that right now you’re seeing people who are competent and qualify to a high level, as good as anybody else. You see a lot of BAME coaches who study the game as much as anybody else, and more. There are some talented people.

“You’re seeing people who have got experience in the game, and also study the game from a coaching perspective. I can only speak for myself, but I also know that I’m around really good, exciting people who are going into coaching – black coaches who are trying to have an impact.

“You just always want to be heard, and to be seen as someone who can make a difference.”

This article was originally published on August 2020.