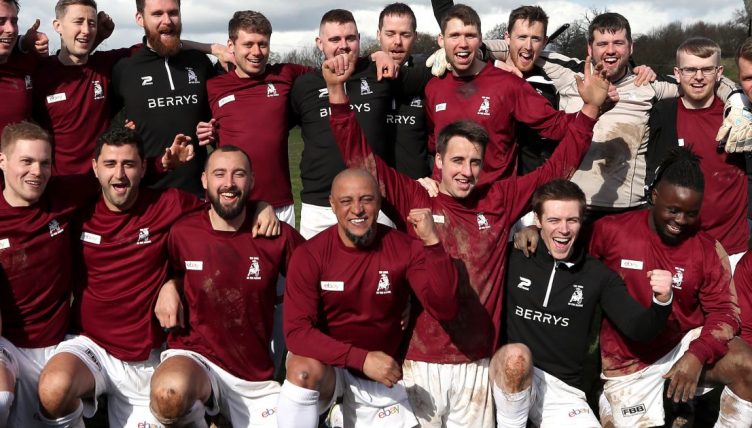 “Roberto Carlos?” my cabbie Paul says in his West Midlands brogue. His incredulity is understandable. Paul is driving me from Shrewsbury train station to Hanwood Village Hall Recreation Ground, a little red-brick building next to a muddy Shropshire field 10 miles from the England-Wales border.

Not only is he in Hanwood, on a muddy Shropshire field 10 miles from the England-Wales border, but he’s here to play, to get his boots back on seven years after his last professional appearance for Delhi Dynamos. Roberto Carlos is making his debut, aged 48, for Bull in the Barne United, who currently sit a resplendent fifth in the Shrewsbury & District Sunday League Division 1.

“I hope he’s brought his shinpads,” Paul says. “They’re going to kick the shit out of him.”

Looking out across the pitch, it’s classic pub team territory. There are some lovely rolling hills in the background, but the foreground is as brown as it is green, mud thick and viscous, especially at the end Bull in the Barne will be attacking in the first half.

Yet not everything here is your normal amateur football fare. A temporary stand has been erected by the pitch and there are a couple of hundred people milling around waiting to catch a glimpse. There are TV cameras and assorted media types. Of course there are. Roberto Carlos is in Shropshire.

Why? Well, Bull in the Barne were one of thousands of Sunday League teams who entered a raffle on eBay, paying £5 for the chance to sign the Brazilian for one game only.

Bull in the Barne’s name was drawn from the hat and their goalkeeper and captain Ed Speller, who put the bid in, was the man who got the call.

“It’s like that winning-the-lottery feeling,” he says. “I was in the office, by myself, shouting out, ‘No way! No way!’ I rang my mum and dad and I was hyperventilating. I sent a message to the lads and they were going crazy.”

Now, Ed’s day’s arrived. Those expectant fans are taking their seats and the Shrewsbury town crier, complete with snazzy coat, pointy hat and a great big bell, is bellowing into the crisp morning air.

Oh, hang on. There’s Chris Kamara. Why? Who knows? Perhaps the better question is: why not? It’s Kammy, for god’s sake. The crowd love him, serenading him exuberantly. His happy-uncle energy only adds to the occasion. Trampling about in his wellies, he entertains his adoring public and stops for a photo with anyone who asks. It’s surreal – but good surreal.

The opponents, Harlescott Ranger, are already out on the pitch, going through the usual Sunday league crossbar challenge warm-up routine. One of them manages it to a cheer from his team-mates.

Then Bull in the Barne emerge, one by one. Finally, straggling at the back, is the rotund little figure of Roberto Carlos, trotting from the dressing room, bracing himself against the bitingly cold wind. The sun’s finally come out, but its best efforts are in vain.

Before kick-off, there’s one thing left to do. Bull in the Barne line up a wall. Their goalkeeper Ed gets in between the sticks. Roberto Carlos delicately places a free-kick. It’s a lovely photo opp, except the Brazilian shanks his first effort several yards wide. Oops. Another crack. This time it nestles in the corner.

Roberto Carlos starts on the bench, so the crowd are forced to wait. But the game gets off to a quick start, some tidy passages of play mixed with a few mud-induced blunders and meaty challenges. 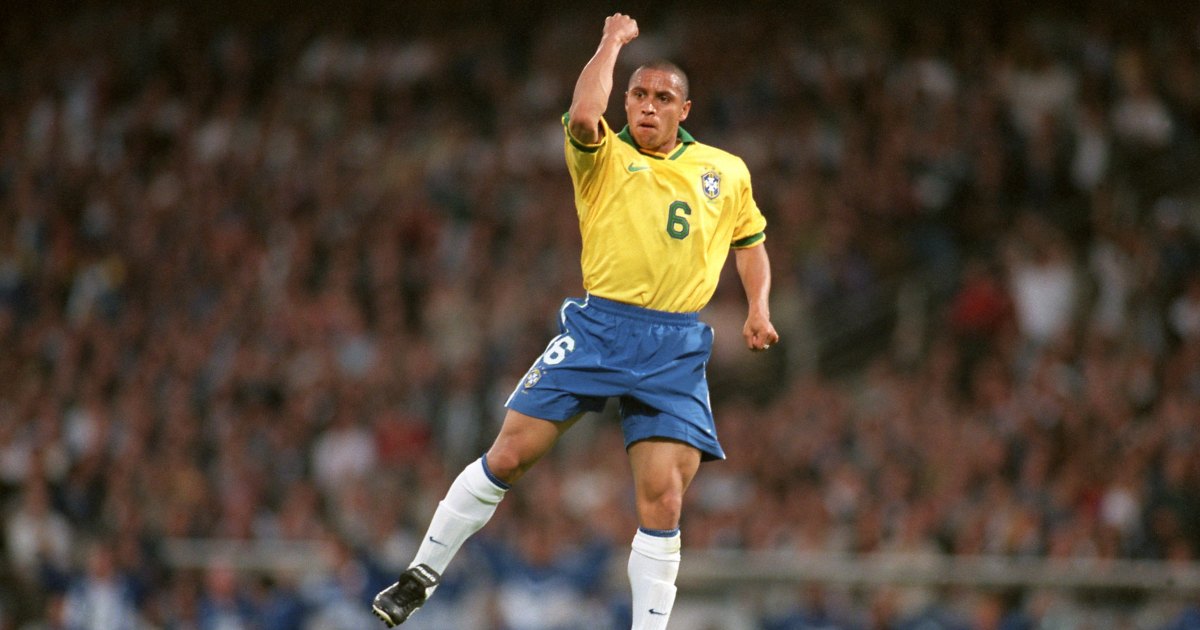 READ: Roberto Carlos: so good he needed scientists to explain his goals

The Bull are well on top. Their No.10 cuts into the box and smashes his effort off the bar. Then he’s in again and flashes one across the ‘keeper. “He looks decent,” I say to a couple standing next to me. “That’s Chick,” they say. “Chicken Legs. They call him that because his legs look like chickens’ legs.”

The couple are Carl and Jeanette. Unlike most of us, they’re here every week. Their twin boys, Kieran and Liam Turrall, both start in defence. The Bull in the Barne lads have all been playing together since they were about five, Jeanette tells me. Now they’re 30. “It’s once in a lifetime, this,” Carl says. It certainly is.

For all the Bull’s early pressure, it’s Harlescott Rangers who take the lead. A break down the left catches the Bull defenders out. A low cross provides Rangers’ centre-forward with a straightforward task.

Some more fibula-endangering challenges fly in. The ref looks waves play on. Carl’s not happy. “Watch your language,” Jeanette warns him. “There are kids about.”

There are. Quite a lot of them. The field backs on to a local primary school and the kids are out, all lined up along the fence, waving homemade banners and shouting exuberantly. “It was like seeing my kids shouting ‘Daddy, daddy!’,” Roberto Carlos says. “I’ve got 11.”

The Bull look to level things up, but Rangers break on them again, this time up the right. It’s 2-0, against the run of play. The Bull need a saviour. It’s time for their new player to be introduced.

The crowd claps and shouts. Apparently, Roberto Carlos has specifically requested to play the Jorginho role, and that’s where he slots in. But his start is inauspicious.

His first touch is ponderous and he gets it nicked off his toe. His second is just as sloppy. Finally, he shows a bit of class with his third. He gets it in the middle and sends a backheel into the path of a team-mate.

The Bull win a free-kick in Roberto-Carlos-at-Tournoi territory and his team-mates summon him over. For some reason, he refuses.

The tempo picks up again and the former Madrid man looks lost, both sets of players streaming past him whenever possession is turned over.

But there’s another bit of quality. Kieran, Carl and Jeanette’s lad, plays the ball to his new Brazilian team-mate in the middle. Roberto Carlos dinks a pass over the top but another Bull in the Barne player spurns another presentable opportunity. Roberto Carlos’ hands go to his head. The ref blows for half-time.

Ed, standing behind his goal stretching out his injured foot, says that their new signing is carrying a knock sustained in an accident. The Brazilian’s limited mobility is explained.

The game resumes and the Bull win a free-kick. This time, it’s well inside the Roberto Carlos zone. He hasn’t started the second half, so everyone looks to the bench. “Bobby, Bobby,” shout the crowd. But he’s still back in the dressing room. A groan arises from the temporary stand.

A flurry of goals follows. First, the Bull get one back. The lanky striker they call ‘Crouchy’ tucks it away and celebrates with the robot. But the Bull’s joy is short-lived. Harlescott Rangers make it three and then four, the latter coming from the spot after a decision that looks a bit soft.

Seven-year-old Callum stands behind the goal. He wasn’t even born when Roberto Carlos retired, but he looks on excitedly. Callum’s wearing a Bull in The Barne shirt with ‘R. Carlos’ on the back and underneath, he’s wearing a Real Madrid top signed by the man himself, which he proudly shows to anyone who’ll look.

The game rumbles on and it’s getting messy now. It’s roll-on, roll-off, and the squads are about 20 deep, but players are cramping. Kieran, lying on the floor holding both calves, lets out a cry of “Eee, ya bastud.”

Bull in the Barne win a corner and their No.25 sends a lovely looping header over the ‘keeper and into the net. It’s 4-2 now. Game on. The Bull are pushed on by the crowd and their persistence pays off. A penalty is given. Again, it looks soft, but no one is complaining.

Fans and players look to the bench again. By now, he’s re-emerged. Roberto Carlos is summoned and tasked with the spot-kick. “I was scared,” he says when asked about it later. But he doesn’t show it, tucking it away coolly.

After the game, the Harlescott Rangers ‘keeper Dan Wood tells me, “He pointed to where he was going put it. But I thought he might have been bluffing and I went to give him the eyes. It was a good penalty, in the corner. You don’t stop them.”

The Brazilian subs himself straight back off but the goal gives the Bull hope and leads to a frantic last few minutes. It’s not enough. It ends 4-3. But there are handshakes and laughs, a team photo and a trophy for the Bull’s man of the match.

If we’re honest, Roberto Carlos’ performance was pretty atrocious. But there were extenuating circumstances and, if top-class football was what we were looking for, then we were always in the wrong place. A World Cup winner might have been present, but this was still Sunday league.

What we came for was fun, a good time, a bit of a giggle. We came to see something surreal, extraordinary, and we definitely got that. We came to see Roberto Carlos’ moment in the Shropshire sun and we got that. The fans got Chris Kamara, the kids had a brilliant day at school and everyone had a sausage bap and a cup of tea from the lovely locals outside the village hall. There’s not much more you can ask for.

This was all a PR stunt, of course, but it was a bloody good one and for a good cause. All the money raised in the raffle has gone to Football Beyond Borders, a charity that works with disadvantaged young people who love football but are struggling in school.

FBB’s co-founder and chief executive Jack Reynolds says that he doesn’t know precisely how much the initiative has raised but it’s in “the tens of thousands.”

Back in the village hall, Roberto Carlos sits down with a smile on his face. “To be able to play at a World Cup final, I had to start on pitches like that in Brazil,” he says.

“It’s like being back in 1993. It’s a great feeling. I’m used to playing at the Maracana, Wembley, the Bernabeu, Old Trafford. [But] I started in grassroots. I started playing with my dad.”

He’s asked which of his team-mates from his career would have had the most impact on this game. There’s no pause: “Ronaldo Nazario. A king never loses his majesty.”

But he seems happy enough with the slightly less regal company he’s kept today. “The good thing is that everyone wants the ball,” he continues. “It’s cool, I have fun playing like that. My whole career was in systems: 4-4-2, 4-1-4-1, 3-5-2. Today, you saw wherever the ball went, everyone went after it.

“In 2007, I had the chance to move to Chelsea. And earlier in my career, I had offers from Birmingham and Aston Villa. But the negotiations didn’t go well. The first English team that managed to sign me was Bull in the Barne. The good thing is that the game finishes and everyone goes to the pub.”

“Are you going with them?” asks an inquisitive voice.

“Of course,” Roberto Carlos replies with a grin. “That’s what I’m here for.”

An ode to R. Larcos, the best Pro Evo player who only sort of existed