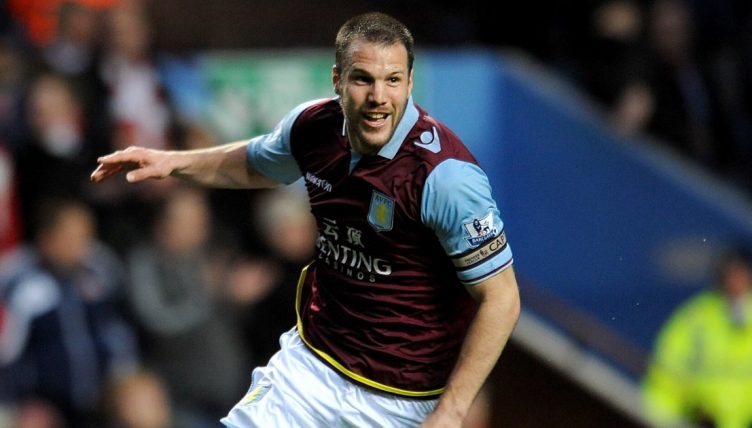 It might not have ended how he’d planned, with injury forcing him to retire in February this year, but former Feyenoord, Aston Villa and Netherlands centre-back Ron Vlaar is able to reflect upon an eventful 17-year career.

From playing for Louis van Gaal, thumping Spain 5-1 and keeping Lionel Messi quiet at the 2014 World Cup, to turning down Tottenham, leading Aston Villa to an FA Cup final and seeing star potential in a teenage Jack Grealish, Vlaar saw a lot during his time as a pro.

Here, he takes the chance to look back on some of the highs and lows.

Planet Football: You enjoyed three seasons in the Premier League with Aston Villa, whom you joined in 2012 and went on to captain, but you could have come to England much earlier in your career. How close did you come to joining Tottenham in 2006?

Ron Vlaar: I went to London twice. Once to speak to Daniel Levy and Martin Jol, who was the coach back then. And the second time I went to see a game on Boxing Day.

I believe AZ and Tottenham had an agreement, but for me at that time, I didn’t want to make a move to England yet because I was too young and I’d played too little in the Eredivisie.

It felt like all or nothing – you go there and you play games and you develop, or you’ve been forgotten after not playing. So it was not the right step for me at the time.

PF: You went to Feyenoord instead, but terrible luck with injuries meant you missed most of your first three full seasons at De Kuip. How did you get through such a difficult period?

RV: I tore my ACL twice – in 2007 and 2008 – so I didn’t play an official game for two years. It was a really tough time. When it happened the first time I thought, ‘This is happening to a lot of players – you can come back from this.’ So I just focused on my rehab.

But then it happened again. My knee wasn’t ready. I had to start over with the whole recovery. Then I thought, ‘OK, it has to be good this time because if it happens again that will be the end of my career.’

I was only 24. I was confused and I was frustrated and a little bit scared. Through the rehab, I found the confidence again in my knee and in my body, but still when I was fit I needed more confidence. I got a tackle in training, and if the knee was not good, it would not have survived. That gave me a lot of confidence.

PF Why did you decide to leave Feyenoord for Aston Villa in 2012?

RV: Paul Lambert had wanted me to go to Norwich, but in that summer he joined Villa and he wanted me to go there with him. I needed that step because the Euros had been a disappointment for me and for the Netherlands as a team. I’d fought my way into the team for the last game, but we went out with three losses.

I thought, ‘OK, I want to go to the World Cup in Brazil [in 2014] and I want to be an important player in the national team from 2012.’ I needed the step of going to the Premier League. That was the perfect opportunity for me to reach my next goal.

PF: In three seasons at Villa Park you only scored two goals, but they were both stunning strikes – a 30-yard drive against Sunderland and a powerful half-volley against Wigan. Did you score many spectacular goals in training?

RV: Maybe! I didn’t score many goals in my career, but when I scored it was usually a nice goal. It would’ve been better if I’d scored more ugly goals, but those are nice memories.

The goal against Wigan, it was the last day of the season and we were already safe. I didn’t play a very good game but that goal was a good touch and a good half-volley. And also to score at Villa Park [against Sunderland] was really fantastic. The crowd went mad. It was a great experience.

PF: It ended in disappointment, with a 4-0 loss to Arsenal at Wembley, but you were part of Aston Villa’s run to the FA Cup final in 2014-15. Were you aware of how special a moment that was for the club at the time?

RV: It was a great experience. I had a lot of family and friends in the stadium for the final. We better not talk about the game – it was a big loss!

I remember the game before the quarter-final, against Leicester. I played that game and I had an assist for Leandro Bacuna’s goal. You could feel something special happening.

Then we played West Brom at home. It was so great to experience. The pitch invasion afterwards said it all about what it meant for the fans. Then we played the semi-final. You could see how much it meant to the fans to get to Wembley, and we played a fantastic game against Liverpool.

Looking back on that, it felt like that was our final because we didn’t really show up in the final. I realised it was a once-in-a-lifetime chance to be part of Villa’s history, winning the FA Cup, but it wasn’t to be.

PF: A 19-year-old Jack Grealish was the young star of that Cup run. Did you envisage him becoming the superstar we see today?

RV: You could see he was really, really talented – a great player for the future. It’s really nice to see that he is still playing for Villa and such an important player for the club and for England. He can create something in any second.

Did I expect him to be as good as he is now? You could see he had the quality, but he still had to show it regularly, and that’s what he is doing.

PF: You first played under Louis van Gaal with AZ when you were just 20 and you had a rocky relationship with the former Manchester United and Bayern Munich boss. Were you at all concerned when he was named manager of the Netherlands in 2012?

He probably changed over the years, but as I know him, he’s really demanding. He demands a lot from the players. He thinks about all the details. That was the same when he was coach for the Netherlands.

PF: The Netherlands’ 5-1 group-stage win over reigning champions Spain remains one the most shocking results in World Cup history. Were you always confident of beating them?

RV: You try to win every game you play. You try to think about the tactics that will give you the biggest chance to win. I think Spain were better in the first half, but we had our chances and we knew we had quality in the team.

It’s easy to say, but we just had to make sure they didn’t score and we had our top players up front, with [Robin] van Persie, [Wesley] Sneijder, [Arjen] Robben, who could make a difference for us. That’s what happened against Spain.

Van Persie and Robben both scored two goals. A few minutes before Van Persie scored his famous diving header, Spain had a really big chance that [Jasper] Cillessen saved. At half-time, you could feel the energy go through the team – that was our springboard for the second half.

The Spain game was my 25th game for the national team. In Holland, you get a silver scale with all the games. I got that after the game against Australia. Also, the king and the queen were in the dressing room. It was really nice to meet them. That’s something I will never forget. 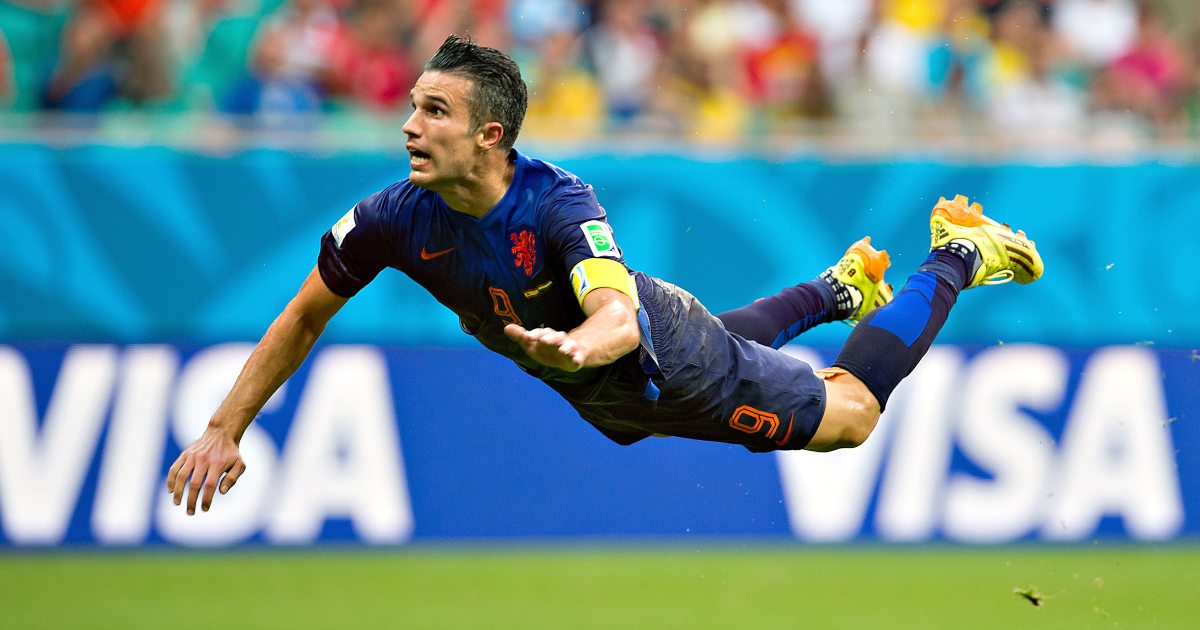 PF: You eventually lost on penalties to Argentina in the semi-finals after a goalless 120 minutes – how did you manage to keep Lionel Messi quiet for so long?

RV: He’s was one of the best players in the world, but we knew how he would play. He would not really defend. He would try to find his space when we had the ball and were attacking, so when we lost the ball he would be free and could dribble – and he’s really good!

So we had to be really focused on where he was. But he is the best, so that was hard work. The plan was: he is a good player when he has the ball and he has space, so when he has the ball, we should not give him space to dribble and make a move. That’s not realistic for 90 minutes, but I think we did quite well.

PF: You missed your penalty in the shootout. Was that difficult to overcome?

RV: I had to overcome it because we had another game to play, but that was really disappointing for myself and also for the team. It was my dream and I really believed we could be world champions.

We were not the favourites, but I knew, with the quality of players that we had, with the coach and the team spirit we showed all through the tournament, that we could do it.

It was a big blow and it hurt. The next morning I was still very sad, but I thought, ‘OK, it’s over now. We can still win a [third-place] medal.’ And that’s what we did.

To win 3-0 against Brazil was a great finish to our tournament. Nobody expected anything of us. We’d had a bad Euros and we’d drawn Spain, Chile and Australia in the group stage. A lot of people though we wouldn’t make it through the group.

PF: Van Gaal became Manchester United manager after the tournament and there were reports that he wanted to take you with him to Old Trafford. Was that move ever close?

RV: No. I think a rumour is quickly done. It was just rumours. We never spoke. There were a few clubs interested in me but I didn’t want to leave Aston Villa for those clubs.