Ruel Fox: Newcastle was ‘intimidating’ for black players before I joined 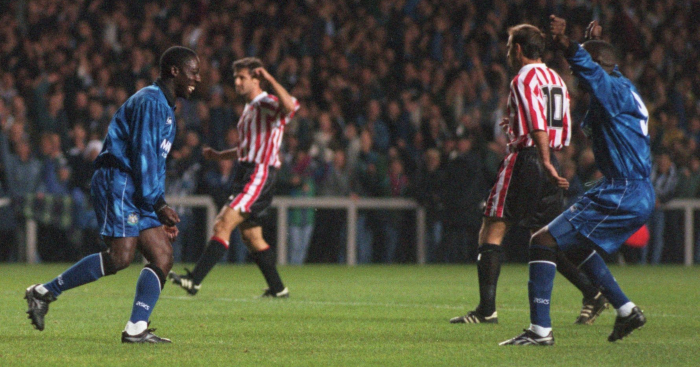 When fans think back to those early glory years of the Premier League in the 1990s, chances are Ruel Fox features.

Fox was a part of two of the most attacking teams to ever grace the English top flight in league upstarts Norwich City and Kevin Keegan’s Newcastle United.

Both stuck to the mantra of attack being the best form of defence. Almost a little too closely, in fact.

Not that anyone was complaining, with those early incarnations of the Magpies and the Canaries soaring to new heights thanks to players like Fox who were given free rein to attack, attack, attack.

Manchester United may have emerged as title winners, but the likes of Norwich and Newcastle are fondly remembered to this day for their swashbuckling style.

‘Intimidating place for a black player’

The winger was the common denominator, having joined the Magpies for £2.25million in February 1994 with Keegan hailing him as “the best player in his position in the country”. Yet Fox himself initially had reservations about swapping Carrow Road for St James’ Park.

“I spoke to Newcastle because I figured I had nothing to lose,” he says. “I wasn’t going to turn down the chance to talk to Kevin Keegan, he was a legend.

“But in the early 1990s, Newcastle wasn’t a place I would have felt comfortable in. I’m not afraid to say that when I had played there previously it could be a very intimidating place for a black player.

“Kevin Keegan sold me on Newcastle. I wasn’t too sure about moving up to Newcastle, but he sold it as an opportunity to change mindsets. If I went there and showed my ability, I could help change the way black players were perceived.

“That appealed to me. It was no longer just about going there and playing football. It was about proving something to people in the same way John Barnes did at Liverpool and Mark Walters did at Rangers.

“It was an opportunity to open doors for other black players. That was a great incentive.”

Before he knew it, Fox was shaking hands with Keegan on a deal.

“Kevin wouldn’t even let me go home to get my stuff. He took me to a hotel, kept me there and arranged for a lorry to go down and pick it all up. That was how quickly the deal was done.”

In Keegan, Fox found a manager who put a huge emphasis on team spirit, someone who would “put the arm around the shoulder and told me how great I was”.

The squad regularly went for meals out together and trips away. Players were given days off training to go back home to see family while Fox even recalls the club putting up visiting friends in a Newcastle hotel to keep him happy.

“Kevin was big on family values and keeping everyone together. He knew how to look after players and make them feel comfortable.

“He might take us off on a golf weekend but he would make sure the wives were looked after too, they would get picked up and taken out so they all got to know each other.”

When it came to the football side of things, Fox found Newcastle wasn’t entirely dissimilar to Norwich.

“Kevin just wanted us to go out there and play. He didn’t talk about the opposition. I can’t remember ever seeing a tactics board.

‘Paul Kitson was no Andy Cole’

Keegan also encouraged Fox to link up with Newcastle’s dynamic front pairing of Peter Beardsley and Andy Cole. It was a match made in heaven.

“We were like the Red Arrows going forward. Andy Cole was one of the best finishers I had ever seen in the box and Peter Beardsley was just world class. I knew if I made a run, he’d put the ball in the right place. Playing alongside someone like that only made my game better.”

Fox eventually struck up a close bond with Cole.

“We were both up in Newcastle on our own, away from our families, and the only two black players in the squad so got to know each other really well. Outside of games we would go out for meals.”

After finishing third in the 1993-94 campaign, Newcastle appeared primed for a title push the following year only for Cole’s famous mid-season move to Manchester United the following January to scupper those plans.

“One day, Kevin just told us all that Andy had gone,” Fox says. “He didn’t come into the training ground to say goodbye or anything. He just went. It was a bit of a shock.”

In Cole’s absence, Newcastle struggled to fill the void with replacement Paul Kitson failing to hit the same heights.

Cole’s departure was one that rankled with the Toon midfielder.

“Newcastle had gone from being this second-tier team to doing so well in the Premier League. All of a sudden it was being dismantled. Just when it felt like we were getting to that peak, rather than push on we sold Andy Cole.”

‘Not something I wanted to do’

Fox still enjoyed an impressive first full season at St James’ Park, scoring 12 goals and earning a call up to the England B team.

He can still recall how he was looking forward to the season ahead when, out of the blue, Keegan called him into his office.

“He told me Tottenham had made a bid and the club wanted to accept.

“He’d swapped Andy Cole for Keith Gillespie and brought in David Ginola that summer, so there were three of us fighting for two places in the team.”

“I was still starting games but I was getting taken off more and more even when I was playing well and scoring. It got to the stage where they forced my hand. I wanted to play football.”

Despite beginning the season at Newcastle, Fox eventually made the difficult decision to put in a transfer request and leave.

“I loved it up at Newcastle. The area, the people, everything. I felt really settled in there. Even to this day, that’s not something I wanted to do.

“Regret is a strong word. I do feel I probably should have stayed for another season and seen where it had gone. But then you make football decisions for the good of your career.”