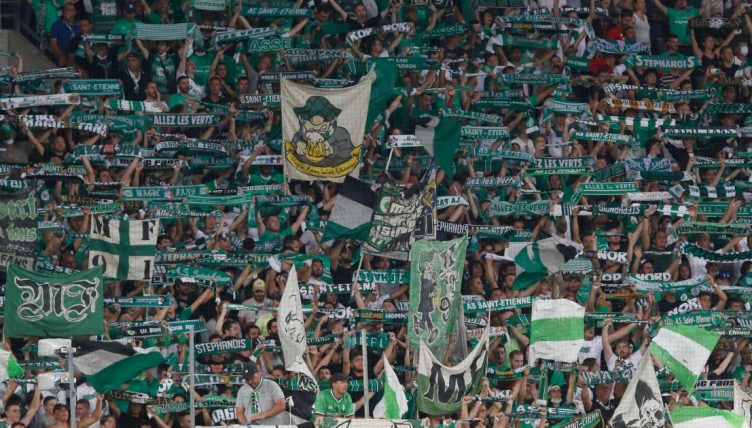 We need to talk about choreographed chanting.

Sure, it looks impressive with the assembled flags, banners, and scarf waving creating a visual assault on the eyeballs.

And it certainly sounds impressive. Take the arrangement at Saint-Etienne, for example.

As my dad and I sit in the Kop Sud (the South Stand for those who failed GCSE French) for their home fixture against Brest, a group of six men perch, facing away from the pitch, on a rickety wooden platform below us.

Two of them bang drums with a level of commitment that’d put Terence Fletcher to shame. One waves a huge green flag, while two more bellow instructions in a tone that straddles both enthusiasm and menace.

The spare, a bald bloke that looks serene in a pair of Gucci sunglasses, contributes nothing but vibes, like a Gallic Bez. All that’s missing is a pair of maracas in each hand.

It’s superficially alluring but, as time goes on, you realise it bulldozes all nuance from the occasion.

The disappointed sigh of a misplaced pass. The low-level hum of expectation at the award of the corner. Unjustified grievance at a refereeing decision. All are lost to the relentless thud of the Kop Sud.

Opposite us, the Kop Nord is indulging in the biggest moshpit seen outside a Slipknot concert while the ball pings randomly around midfield.

But it’s impossible not to feel the passion inside the Stade Geoffroy-Guichard. And Saint-Etienne is nothing if not passionate about its football.

For all their success on the international stage, there’s always been a suspicion that the French secretly prefer cycling.

Brian Oliver, a writer for The Guardian, recalled the ease at which he acquired a ticket to their first game of the 1998 World Cup against South Africa – a tournament France was hosting.

“We were a small group of friends, and some of us needed tickets,” Oliver wrote. “Would we be able to afford it, or would we be priced out of the hosts’ first game? Amazingly, tickets were available for as little as £7.50 – less than face value. I paid a tenner; none of us paid more than £15.

“The level of indifference to their national team – at least at the start of the tournament – by the host nation was staggering.

“Back at Italia 90, the whole country stopped for Italy’s games; people cried and screamed and couldn’t bear to watch the tense moments. And France, who would go on to win the World Cup, couldn’t really care less.”

While France are the current world champions, and the Ile-de-France region around Paris produces more footballers than anywhere else in Europe, the domestic scene has historically lacked the passion of England or Italy.

There are some exceptions to this, such as the northern outpost of Lens, where the 38,000 capacity Stade Bollaert-Delelis is bigger than the city’s population. Questioning the footballing credentials of Marseille, meanwhile, is a one-way ticket to A&E in that southern metropolis.

And there’s been a significant rise in hooliganism throughout Ligue 1. Just days before, perched high in Parc Olympique Lyonnais, I watch as Lyon fans riot after their Europa League elimination against West Ham.

The French police kept us West Ham fans back for over an hour afterwards, wary of a confrontation that would’ve made Agincourt seem like a family barbeque. There’s no doubting the passion of French supporters anymore.

But, even so, nothing quite compares to Saint-Etienne.

Overshadowed by Lyon as a cultural hub, the city is widely regarded as a post-industrial backwater; the kind of place no tourist would ever think to visit. But, midway through the last century, it became known throughout Europe for its wonderful football team.

Michel Platini played here. So did Johnny Rep. The club won 10 league titles between 1956 and 1981, often playing exuberant football that established Les Verts as the dominant team in France.

But the legend of Saint-Etienne stemmed from their heroic European comebacks. Perhaps the most memorable came in 1974 when, after losing the first leg of their European Cup second-round tie 4-1 to Hajduk Split, they stormed to a 6-5 aggregate win.

They reached the European Cup final of 1976, losing 1-0 to Bayern Munich in a game that’s still cherished as one of the most exciting, emotion-filled nights in French sporting history.

Jacques Santini, the former Tottenham coach, and Dominique Bathenay both hit the Bayern crossbar with the game goalless, but – as any self-respecting Saint-Etienne fan will tell you – the ball stayed out because the goalposts were square rather than rounded.

But defeat at Hampden Park and those poteaux carres (square posts) forever look destined to be Saint-Etienne’s finest hour.

The club has endured four decades in the doldrums and, as our train from Lyon speeds through rolling green hills and sunkissed lakes, they sit in the Ligue 1 relegation zone.

There’s an air of depression around the city. While the area immediately around Saint-Etienne-Chateaucreux station is smart and modern, the surrounding streets are a parade of closed shops and the absence of hustle and bustle.

It is, like many post-industrial towns in the UK, a place where football both defines the people and its local economy.

While not as bourgeois as Lyon, Saint-Etienne did possess a certain charm for this English visitor.

My pre-match glass of Kronenburg, drunk in a bar overlooking the central square, is the perfect spot to watch the protests about Marine Le Pen’s attempt to drag France back a few centuries.

Its name? Glasgow 1976. This is clearly the kind of place that pays suitable homage to its past.

And their political allegiances are clear. We’re handed a club newsletter headed with the image of Che Guevara. Flags of Palestine and Senegal are being carried by some supporters en route to the Guichard.

The half-hour walk to the stadium, carrying a baguette, a delicious pomme and sipping on a bottle of 8% Belgian beer in the Easter sunshine, is a minor delight despite the prosaic surroundings.

With the need to purchase a ticket growing, my language skills become stretched further than Boris Johnson’s relationship with the truth.

Eventually, after asking for ‘deux billets, s’il vous plait‘, and making the girl at the ticket office giggle at my Bristolian-inflected French accent, we manage to acquire two €10 seats behind the goal. Pas mal.

But my dad seems intent on causing an international incident. After somehow losing his ticket just after navigating the turnstiles, his attempt at taking a rucksack into the stand is thwarted by the on-duty stewards.

Only some bargaining and a certain exasperation about the ‘Anglais‘ see them back down. He rewards their generosity by jovially complaining about the head on his pint to the bar staff.

But this pomme hasn’t fallen far from the tree. As I absent-mindedly move to take a picture of some green stickers, I find a burly man blocking my path.

I have unwittingly bumped into a ‘Green Angel’. Ultra territory. We have this same conversation twice more, with his wafer-thin patience evaporating and my tipsy bravado morphing into apprehension.

We passed a bus headed to ‘Bel Air’ an hour before. I get the impression that I’m about to become the Loire Chris Rock.

So I back away, in the pathetic worm manner nailed by Mark Corrigan. The ultra, with the animated use of his arms, instructs the bar staff and his cronies not to allow any photographs to be taken.

But I have the last laugh. When my pea-sized bladder betrays me five minutes into the game, I slip off to the toilet and find the stickers unguarded. It’s a tap-in for this inquisitive journalist.

In the process, however, I miss the first two goals of the game. Still, small victories and that.

The match itself isn’t much to write home about, giving us the opportunity to work out the spot where David Beckham was sent off against Argentina in 1998.

Brest are neat and tidy but, given their comfortable mid-table position, are lacking urgency. They produce some pretty passing triangles but don’t offer much in the way of resistance to satisfy the 100-or-so away fans.

Saint-Etienne seem to have the opposite problem. Willed on by their noisy supporters, their players put a shift in but seem incredibly nervous. The ball pings off shins and heels, while Wahbi Khazri offers a variety of flicks and skills that should ensure a long career in Masters Football.

But their greater need pays off. Two goals, both scrambled in from corners, are enough to send Les Verts into half-time with a 2-1 lead.

The noise doesn’t relent. Even at the interval, as the two Kops sit and eat their sandwich saussicon, a group of schoolchildren continue the din while being conducted by their teachers.

Without any skin in the game, and needing to catch our return train to Lyon, we leave with 15 minutes to go. Maybe it’s a post-Lyon hangover but the offering is akin to a mediocre Netflix series – mildly diverting but not quite grabbing the imagination.

The fans and their drums can be heard over a mile from the stadium – and it’s no wonder. Saint-Etienne hold on for the victory that moves out of the relegation zone.

While the match could never live up to West Ham’s Europa League victory (for this Hammer, anyway), the Guichard experience was ultimately an enriching one. I hope they stay up.