A good youth scouting network can be worth an enormous amount of money to a football club – and a taxi driver from Salford believes he is about to revolutionise the whole industry.

Les Caffrey works as a grass roots and academy scout for a top Premier League club, but it was actually his experience running a taxi firm that provided the inspiration for the Global Talent Scouting (GTS) technology that’s already being used by several top flight and Football League clubs.

“My taxi firm uses an app to track journeys so I thought it would be great for the clubs if there was an app that could track where their scouts are to save everyone’s time with loads of expenses claims.

“My system locates where you’re stood watching a game using GPS and measures the mileage you’ve done from your house. A head of recruitment can press one button and see where all his scouts are at one time.”

It seems remarkable that such technology has not been in place before now, but it’s just one of several examples of an outdated industry, according to Caffrey.

“There’s no standardisation of scouting reports at all,” he says. “I saw one recently about a player who was described as a tall lad with black hair and a big nose. That’s the kind of report that’s being sent into clubs. Genuinely. 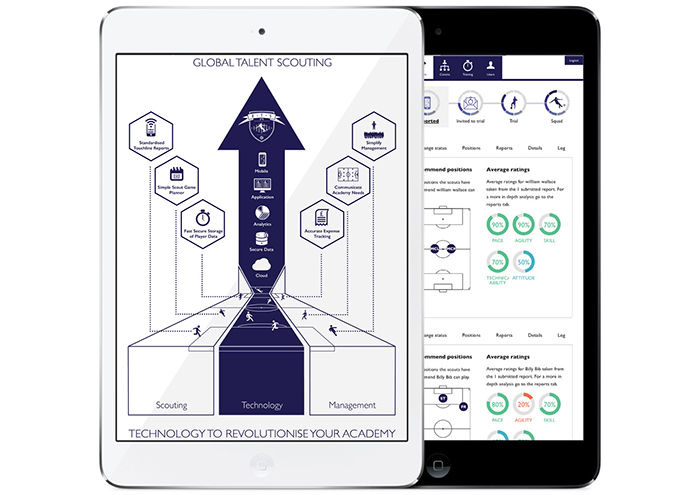 “How it works at the moment is that I’ll go to a game, write down as much information as I can, then fill in a big index form at home which I scan and send back to the club where someone will manually input all of the information into their database.

“And he has to do that for every scout report. It’s mind-bending.”

It was this muddled, unorganised way of doing things that had provided Caffrey with the inspiration for the other main USP of his product – a standardised scouting report – though he did not realise it at the time.

He says: “When I’m assessing players I work off the PASTA system, which is pace, athleticism, technical ability and attitude.

“Five or six years ago I was working for a club in the Championship using these PASTA reports so I got a notebook and wrote PASTA down one side, one to five along the top, and parent’s details on the back.

“All these years later, our technology is effectively just a more technical version of that chart in my notebook.

“I use the PASTA system, but it’s fully configurable so a scout can choose up to 10 things to rate a player on, and there are sliders for each category.

“All a scout has to do now using our technology is move the sliders to add the ratings, write a quick report on the player, get the parent’s details and press submit.

“That’s then immediately submitted to the head of recruitment at the club. He could ring the mum before she’s even left the pitch and arrange for the player to come into the club while everyone else is stood there with notebooks in the rain.”

For clubs using GTS, it’s not only the players that can be rated; clubs can also more effectively track the performances of their scouts and the quality of the information they’re sending.

Caffrey says: “A club might have 100 scouts. There might be some good ones, some OK ones and some who aren’t so good, so using GTS the head of recruitment can grade them all 1-10.

“If you’ve got a grade one scout and his report comes in, it overrides everyone else’s.

“A head of recruitment can press one button and see everywhere a scout has been, the miles he’s covered, the reports he’s sent in, a full rundown.

“Another major benefit of the app is the squads section, which is a secret shopping list that only scouts can see.

“If I’m watching an Under-12s games and see a fantastic striker, if I press squads I can see the current squad at the academy with players in red, green and amber.

“If a player is green, they’re rated as being a massive talent so it will be difficult for me to get this new player I’ve seen into the club. You’ll recognise the player’s name at the club and might think this new one you’ve seen isn’t as good, so you don’t bother recommending him.

“But if the current strikers are showing as amber it might be worth having a look at this new player, and if they’re showing as red the club is desperate for someone in that position.

Caffrey has spent the last two years developing these features – and there are plenty of others – and GTS have already been contacted by a market leader in the industry that want to make the platform globally used.

“We’re going around showing it to clubs, and they’re blown away,” Caffrey says. “I’m talking about category one clubs, big clubs, and they’ve said ‘wow, how have you done this?’

“I’ve met heads of recruitment that love it so much the clubs have taken it on trial there and then. I’ve had it said to me that it’s the future of scouting.

“I own a taxi company in Salford. We’re just normal people, we’re not tech people. I even had to get my friend to set me up with an e-mail address. Seriously!

“How can a lad that stands in the rain watching grassroots football devise a system that all the big clubs are taking?”