Man Utd, a bullet to the brain & the enduring legacy of Salvador Cabañas 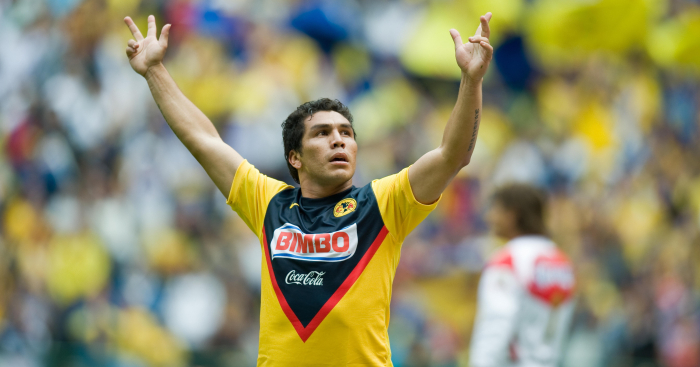 At 29, Salvador Cabañas survived a bullet to the head. Like other players forced to retire early, he can still appreciate the unfolding of his own legend.

Mexican federal prosecutors announced on Sunday that Jose Jorge Balderas, a member of the ‘Los Negros’ drug cartel, will spend the next 20 years in prison on charges relating to organised crime.

But that’s not why most South Americans know who he is.

In the early hours of 25 January 2010, Balderas — known in the underworld as ‘JJ’ — shot Paraguayan footballer Salvador Cabañas in the head after the pair had quarrelled in a Mexico City nightclub.

According to Cabañas, who survived the shooting despite the bullet lodging in his brain, Balderas had a problem with the footballer earning money in Mexico.

It wouldn’t be Cabañas’ last day, but it would be his last as a top-flight footballer.

At the time of the shooting, Cabañas was 29 years old. His club, CF América, was two games into the 2009-10 Mexican close season, and the forward had scored two goals in the opening match.

His second in that 5-1 win, seen below, would be his last.

The forward was playing an equally important role for his national team. Paraguay had qualified for the 2010 World Cup, and Cabañas, with six goals, had contributed more than any other player.

Just nine days after the attack, Cabañas was plotting his return to health, hoping to feature in the finals.

It would prove to be an unrealistic hope. Despite several attempts at a comeback, Cabañas never again played at the highest level and never added to the 44 caps he had earned prior to the incident.

Without their leading scorer, Paraguay reached the quarter-finals of the World Cup but failed to score in either of their two knockout matches.

In spite of everything though, Cabañas can still take solace from his ordeal.

While there’s never a good time to take a bullet to the brain, the looming World Cup — which Cabañas had worked so hard to qualify for — makes the shooting seem especially cruel in hindsight.

But it would be wrong to think that Balderas attacked the footballer at the definitive peak of his career.

In fact, newspaper El País named Cabañas the South American Footballer of the Year in 2007, placing him alongside legends of the continent like Ronaldinho and Juan Sebastián Verón. He finished third a year later.

By the time of the shooting, he had been scoring consistently for around six seasons. So while he became famous for the near-death incident, he was already a big star in South America.

He could have been one elsewhere, too.

According to Cabañas himself, he had a ‘deal’ in place to sign for Manchester United before the attack.

“Back then, I had many offers from European teams,” he revealed in 2016. “But the most complete one was from Manchester United, and I was on the verge of going there.”

The lost opportunity of a European adventure adds another element of tragedy to the shooting: Cabañas might have been a hit at Old Trafford, the ideal replacement for the departed Cristiano Ronaldo. (United’s actual signings that year — Michael Owen, Gabriel Obertan and Mame Biram Diouf — certainly weren’t.)

While it doesn’t feel great to suggest that a nearly-killed man is bending the truth, there does appear to be an element of fantasy in Cabañas’ claims.

In the weeks leading up to the shooting, newspapers weren’t linking the burly 29-year-old forward with Manchester United; they were linking him with another Premier League side: Steve Bruce’s Sunderland.

“I’ve monitored Cabañas,” Bruce told the Sunderland Echo at the time. “Whether a deal is possible for him, I don’t know. He’s somebody who would be of interest to us, but I’m sure if he became available there would be a lot more clubs interested too.”

Perhaps Manchester United were one of those clubs, but the Sunderland connection made more sense. Signing a 29-year-old South American with no European experience was not a very Alex Ferguson thing to do; it was, however, a very Steve Bruce thing to do.

In other words, it seems possible that the Paraguayan was simply adding a layer of polish to his backstory.

By revealing the Manchester United connection years later, Cabañas has added another layer of cruelty to the already cruel twist of fate. Not only did he have his World Cup dream taken away from him, he also lost his dream transfer.

Importantly, Cabañas has every right to talk up his own career — whether there was a concrete offer from Ferguson, an enquiry, or even just a chat with an agent. The 2010 incident took away the final years of his career, denying him the chance to write his final chapter with his feet.

But Cabañas is now in a strange position. After being robbed of his footballing life but not his actual, corporeal one, he has a chance to watch (and, to a certain extent, control) the telling of his own tale, to see that his brilliance is not lost to the archives.

It’s not a totally unique phenomenon. When Planet Football last year published a tribute to Dean Ashton — whose career was, admittedly, ended by Shaun Wright-Phillips, not a Mexican gangster — the former striker expressed his appreciation.

“Like a bear performing ballet”
Made me laugh out load on the train!!!!🤣🤣 https://t.co/hqvSvt8umi

Ashton will rue his lack of an international career, but professionals forced to retire early are understandably happy to know that other people saw their qualities, however unrealised.

Cabañas, too, should soak up the admiration he deserves. Now working in his family bakery without the fortune that once earned him a bullet to the head, the Paraguayan can do nothing but tell his story and watch how other people tell it to one another.

There’s something reassuring about that. Watching one’s legend unfold throughout history is a luxury not afforded to players who lose their lives in similar tragedies — footballers whose stories will be retold but whose legacies will be forever out of their own hands.

So while we should certainly feel sorry for Cabañas, who lost the end of his career to an unprovoked attack, we should also be happy for him.

With that part of his life now behind him, and having openly forgiven his attacker, he can now watch his legend grow, basking in the appreciation of those who already revere him as a near-mythical figure.