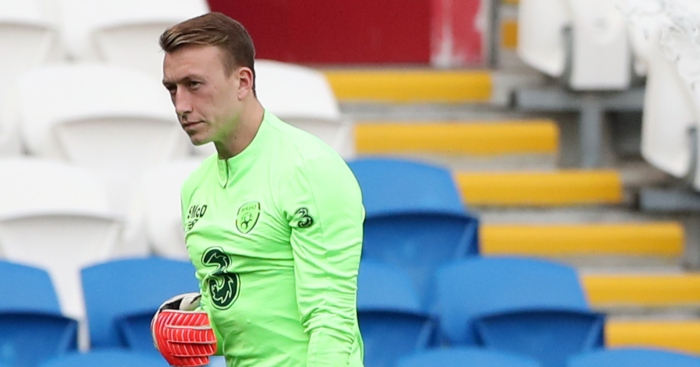 Sean McDermott could be forgiven for having his confidence knocked following a doomed six-week spell in Romania and missing out on Mick McCarthy’s first Republic of Ireland squad since his re-appointment, but it has only reinforced the goalkeeper’s self-belief.

The 25-year-old was born and raised in Norway before moving to Arsenal as a teenager and then moving back to the land of his birth to begin his professional career.

That led to a first Ireland call-up in 2018, but, following a January transfer to Romanian side Dinamo Bucharest, McCarthy picked five keepers ahead of McDermott for the Euro 2020 qualifiers against Gibraltar and Georgia.

Now back in Norway with Kristiansund, it’s safe to say McDermott’s time in Romania did not go well.

He had been told he would be No.1 upon signing, but after three games, only conceding in the third, he was demoted to third choice, with his manager complaining he wanted a “goalkeeper, not a libero”.

Both McDermott’s goalkeeping style and ambitions were formed at Arsenal, and he is not willing to compromise either.

“They said I would be No.1, but I never expect to just walk in without proving I’m the best and I never take anything for granted,” McDermott says.

“I played the first three games, I kept clean sheets in the first two, we lost 2-1 in the third and I read somewhere I made mistakes, but if you look at the goals it’s not goalkeeping mistakes, it’s normal goals going in.

“You can always discuss whether you should do better, but it’s just goals that can go in anywhere. You’re never the perfect goalkeeper.”

McDermott was only told the day before the next game that he would not be in the matchday squad and was effectively the third choice following the arrival of another goalkeeper, Parfait Mandanda.

“I thought if that’s the way you do things here: you lose one game and I am suddenly number three, then it’s not a good place to achieve my personal ambitions,” McDermott says.

“I am still young, I am only 25, I want to be Ireland No.1 and play in the best leagues in the world, and I don’t think this is the right place for me to develop. As soon as we lose a game, I am out.

“It just didn’t feel right. I also look at the team, they bought a lot of new players in January and I wasn’t part of the team they wanted to build for the future, they were changing out players, so it wasn’t the right place to develop.”

The reason McDermott had joined Dinamo in the first place was their desire to bring him to the club, prising him away from Kristiansund, where he had won Club Player of the Year and Fans’ Player of the Year during his two seasons.

McDermott’s good form also earned him a call-up to the Republic of Ireland squad under Martin O’Neill – but only after he’d alerted the manager to his capabilities.

“I had to reach out to them to come and watch me,” he says. “After the Under-21s I feel like I was forgotten, but in England you get seen.

“It was very pleasing [getting called up] as I work so hard every day, I was performing well and then I was looking at the squad getting picked and thinking, ‘Why am I not picked? This guy is not even playing.’

“They had not been watching me, but then they started and were nice enough to come all the way over here to Norway which I appreciated. I did well and I started getting noticed again.

“Getting into the senior squad was a highlight of my career. But I am not where I want to be yet, as I want to be No.1 and I am sure I am going to get there.”

Sean McDermott (24) of Kristiansand in Norway should be called up to Irish National team if Westwood is out. He should be ahead of Colin Doyle who plays in league 1 anyway #COYBIG

The brief spell in Romania may have cost McDermott a spot under McCarthy who did not select the former Arsenal man, despite picking five goalkeepers for his first squad since replacing O’Neill.

“It’s a bit frustrating but, at the same time, I understand it,” McDermott says. “At first I thought I would not be in the squad because I went to Dinamo, but I played three games and now I’m back at Kristiansund.

“The season hasn’t started, but we are playing games and then I see some of the keepers in there who aren’t playing first-team football, so in that sense it’s a bit frustrating. But it’s out of my control.

“I just have to respect their decision, it’s their opinion. I think I’m better than the whole lot they have, but I have to respect it, work hard and show that I am good enough and hopefully they’ll pick me.”

Premier League football is huge in Norway, so McDermott’s move to Arsenal as a teenager was big news back home and followed national recognition when he was selected as one of the best 25 young players in the country to form part of a squad coached by Ole Gunnar Solskjaer, which also led to interest in the goalkeeper from Manchester United and Spurs.

McDermott spent three years at Arsenal’s academy before returning to Norway in 2012 after a move to Holland fell through, eventually signing for Sandnes Ulf and becoming their first choice at 19 until being replaced by Iceland’s No.1 Hannes Þór Halldórsson.

“I was probably in the top half of the better keepers in the league – but I learned a lot from just being thrown straight in with grown men, senior players, so it was a very good learning curve for me.

“Then they signed the Iceland No.1, who is also a very good keeper, so he took my place. I sort of disappeared for two and a half years, then I had to work my way up again.

“For two and a half years I didn’t play. Growing up at Arsenal, you have people working for you, everyone likes you, everyone wants to be your friend, everyone is ringing saying, ‘I can get you here.’ Everything is good.

“It was the same in Norway in my first season when I was playing at 19, but then when you’re not playing you don’t hear anything from anyone. That’s when I made the decision for myself to work even harder to become the best and to come back so everyone can see how good I am.

“That’s when I dug really deep and started to work really hard. Even today I do two or three sessions a day; I do one football session and then one or two by myself and I am getting results.

That hard work paid off at Kristiansund, the club he has returned to after his brief sojourn to Romania, and now he is out to prove he really is the best goalkeeper Ireland have available to him.