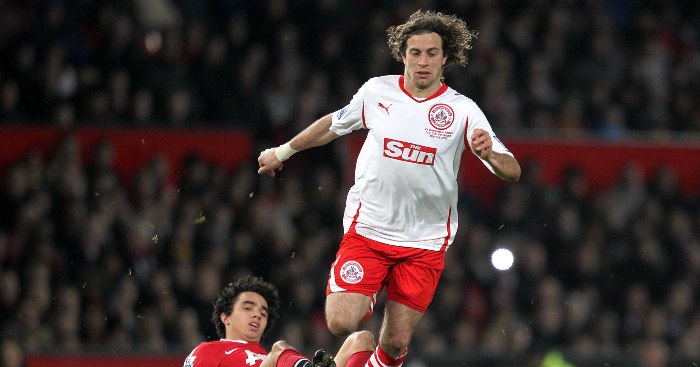 Sergio Torres had always dreamed of becoming a professional footballer and was prepared to travel thousands of miles from home to make it happen.

In Argentina, Torres was playing in the regionalised fourth division while working in his dad’s brick factory, but he wasn’t satisfied. Heading to England turned out to be a life-changing decision.

His agent sent off some highlights and managed to arrange a trial with Brighton and Hove Albion. It wasn’t successful, but Torres refused to give up, and 17 years later he’s still living and playing locally, with a story of great sacrifice and perseverance to tell. His hard work paid off as he went on to represent Wycombe Wanderers, Peterborough United and Crawley Town in a remarkable career.

“After the first few weeks, when I had the trial at Brighton, I was thinking ‘Oh my god, I’m really out of my depth here.’ But I believed in myself,” Torres says. “I had a target in my head and I was going to work so hard. It worked out amazing and every club I’ve been to has taught me something. I just fell in love.”

Torres arrived in November 2003 without speaking any English. He had spent a lot of money on plane tickets and had no idea what to expect or when he would return home. He stayed with a Cameroonian agent in south London and had to share a bed with the agent’s cousin.

He began to doubt his decision, and the standard of football at Brighton took him by surprise.

“I didn’t think it was going to be much different, but I was completely wrong. I got absolutely smashed to pieces. I couldn’t believe how physical the football was, how quick and how powerful the players were. With everyone wearing the same kit, and how professional everything looked, I was like, ‘Wow.’

“After two weeks the manager said, ‘Look, you’re a good player. You’re technically very good, but you’re not strong enough or quick enough for English football. You’re going to have to work on that if you want to have a career.’ At the time of course it hurt. I took it on board, and he was absolutely right.”

Despite that initial disappointment, Torres was hooked. He loved the passion and professionalism of English football and was determined to make his trip worthwhile. He phoned his parents and said that he was extending his stay in England.

Boots by day, footballer by night

Torres spent two months living in the agent’s house, but there were no more trials to attend. They had an argument and he left, moving in with an Argentinian player he knew from back home and his agent. They started playing together for Molesey and then Basingstoke Town, but it was still a struggle to make ends meet.

“I was working in Boots because I couldn’t afford to live on the wages at non-league,” he says. “I was lucky as well. One of the fans took us to live in their house because we didn’t have any money.

“When they had family over, we didn’t have a place to stay so the Basingstoke manager said we could sleep in the boardroom if we wanted to. We didn’t have to pay any bills, so we ended up staying for three months, sleeping on the floor of the boardroom.

“We were happy. People think, ‘How did you do that?’ I don’t know. At the time, you’re young and you just want to progress. I was trying not to spend any money, which I didn’t have. I had so many people help me on the way to reach my dream.”

The breakthrough Torres had been longing for finally came in the summer of 2005. After impressing in a pre-season friendly against Wycombe Wanderers, the club invited him on trial. A month later, shortly before the transfer window closed, he signed his first professional contract at the age of 24.

“It was just pure happiness. Straightaway I called my parents and told them, ‘My dream came true. I’m going to be a professional footballer.’ Even though it was only a contract for two years, and the money wasn’t great at all, I knew I needed to start somewhere and prove myself.

“Wycombe was such an amazing club, and I was thankful to John Gorman, who gave me the opportunity.” 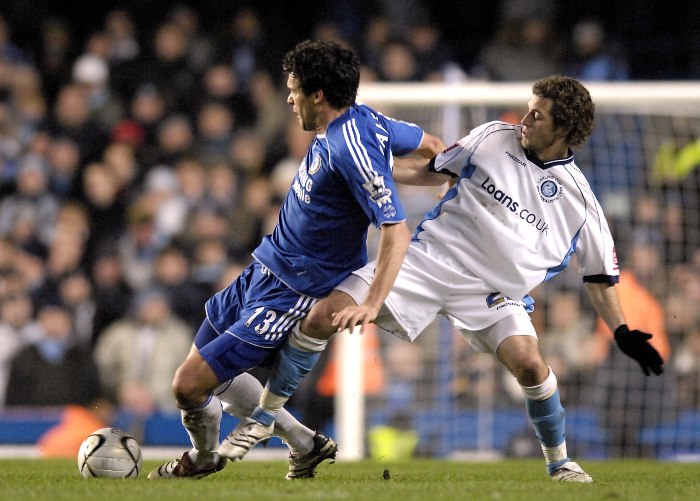 Torres spent three years at Wycombe, during which they twice reached the League Two play-offs, as well as facing Jose Mourinho’s Chelsea in the semi-finals of the League Cup. Promotion proved elusive, but the midfielder gained some invaluable experience and became a fan favourite.

“The fans were absolutely amazing. I couldn’t believe when they made a song for me and wore wigs because I used to have proper long hair. It’s an amazing football club and I’m so happy that they just got promoted to the Championship.

“The assistant manager (Richard Dobson) was there when I was there, and I still talk to a few people from the club. I’m so happy for them.”

After 98 appearances for the Chairboys, Torres was signed by Peterborough United for £200,000 in a joint deal with defender Russell Martin. He was pleased to step up a division and helped the club win promotion to the Championship in his first season, but he struggled to adapt to a new position and Darren Ferguson’s austere management style.

Injuries didn’t help matters, and there were even times when he considered returning to Argentina.

‘My brain was playing against me’

“The manager told me I was going to play right wing and I didn’t think that was my strength. I like to play on the left or in the middle, so I had a few discussions with the manager.

“The team was flying. They were top of the league and doing really well, so it was hard for me to break into the team. We ended up getting promoted, which was an amazing thing, but I didn’t really feel part of it.

“I ended up getting a bit depressed because the manager didn’t really talk to me that much. I didn’t feel loved and I found that really difficult after coming from two really close man-managers at Wycombe with Paul Lambert and John Gorman.

“Darren was a bit different. I struggled with that, and I struggled to settle in Peterborough. It’s such a shame because it’s such a good club. But, for me personally, I didn’t play my best football there. I was playing at the highest level I’d ever played, but I wasn’t happy.

“Luckily, the year before that I’d met my girlfriend, who is now my wife. She used to live in Germany. She moved to England with me and she was a key thing for me to stay. She said, ‘After all the work you did to get where you are, you’ll really regret it if you go back home. You need to get through this bad period.’ Thanks to her I ended up staying and things improved after that.”

In the summer of 2010, Torres had an offer from Crawley, the ambitious and big-spending Conference side, but he was reluctant to drop into non-league again. Fortunately, the chance to live in nearby Brighton appealed and he has been on the South Coast ever since.

There were successive promotions at the start of his four years with Crawley, as he gradually embraced the idiosyncratic ways of Steve Evans. 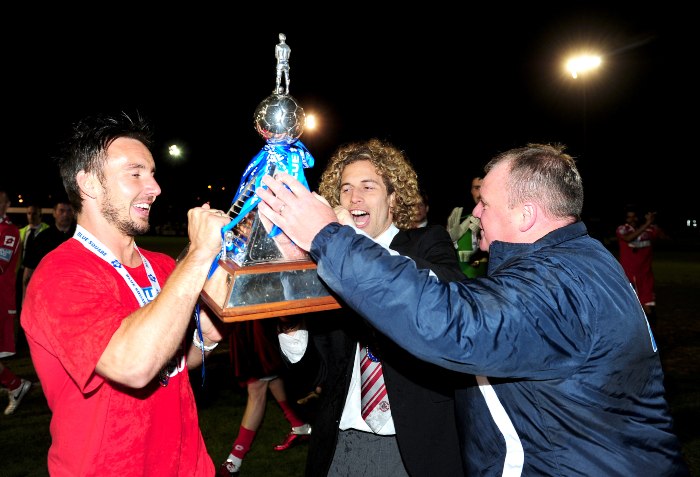 “He’s a massive character. I like Steve and I’m still in contact with him. He made me change my style of play and for two years I hardly missed a game. We got back-to-back promotions, which was outstanding. It was the first time the club had been in the Football League and then we got to League One.

“Steve was such a great entertainer and a great character. It was difficult at the beginning because I didn’t agree with how he was talking to me and the other players. The way he was shouting and acting in the games.

“After two or three weeks I went to speak to him and I said, ‘Steve, I don’t think I can play for you. The way you talk to me, I don’t think you like me.’ He stood up and said, ‘Okay, I don’t like you. I bloody love you.’ And then he came and gave me a big cuddle.

“He said, ‘Don’t take it personally. This is how I am. I get really passionate in the game and you need to deal with me.’ After that it was fine.”

The pinnacle of Old Trafford

Backed by major investment, Crawley made some clever signings, including the prolific Matt Tubbs, and took the Conference by storm. They also progressed to the fifth round of the FA Cup, where they were drawn away to Manchester United. Seven years on from an inauspicious start to life in England, Torres walked out at Old Trafford in front of nearly 75,000 supporters.

“I remember standing in the tunnel and thinking about everything I went through from my first few days in England; sharing a bed at the agent’s house, sleeping in the boardroom, waking up at five in the morning and getting on my bike to go to work. All this effort paid off. So many things went through my head.

“My dad came from Argentina just to watch that game. My family was watching it live. After the game, my dad said, ‘I’m so proud of you, son.’ Everything was worth it. All that hard work at the beginning. That’s why I always say to people, ‘Don’t stop believing’, because you never know what’s around the corner.

“Football is a game of opinions. It’s full of setbacks, but you need to be strong mentally and carry on. That was definitely the pinnacle of my career.”

It was the culmination of on an unexpected journey from Mar del Plata to Molesey and up through the Football League, where Torres became a cult hero at a succession of clubs thanks to his warm personality and committed performances.

Even now, at the age of 39, his adventures in English football continue. He is still playing in the Conference South for Eastbourne Borough, combining his playing commitments with a role as the club’s assistant manager. He also coaches children as part of an academy set up by his close friend and former team-mate Russell Martin, passing on his love for a game that took him halfway around the world.

“I love working with kids,” says Torres. “They’re such good fun and they just want to enjoy the game. That’s what my key message to them is. Just make sure that you enjoy it. As you grow up, if you make it then you have more pressure and less enjoyment.

“I’m really happy to be working with the first team at Eastbourne and with kids at the academy. I would just like to help as many people as I can along the way with my own experience and what I went through. I’m looking forward to what’s to come as a coach.”