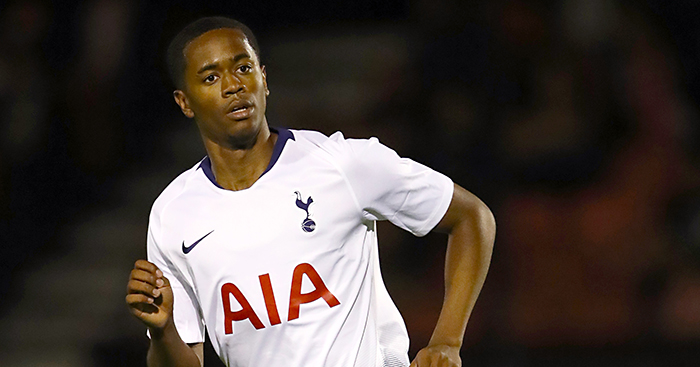 It was a moment Shayon Harrison will not forget in a hurry. Tottenham were 2-1 down in a League Cup clash against Liverpool in October 2016, when, in front of more than 40,000 at Anfield, he was through on goal with just Simon Mignolet to beat.

Harrison, who had replaced Georges-Kevin Nkoudou moments earlier to make his debut, moved into space as he met Erik Lamela’s high cross.

But when the ball dropped on to his chest, it ran away from him and Mignolet collected it with ease as full-time approached.

Tottenham lost the game 2-1 and Harrison never appeared for the club he had been at since he was nine again.

Tipped by many to follow in fellow striker Harry Kane’s footsteps at Spurs, he believes that moment changed his career with the north London club.

“As the ball rolled into the goalkeeper’s hands, it hit me just how much of an opportunity that chance had been,” says Harrison, who now plays for Dutch second-tier side Almere City. “I don’t regret it, but it is something I will not forget for a long, long time.

“I do believe, had I scored, I would have had more chances in the first team at Tottenham because you look at the players who made an impact on their debut, such as Jadon Sancho and Marcus Rashford.

“The sky is now the limit for those boys. But I try not to dwell on it too much as I am now taking a different pathway.”

Rather than confront him about the miss, Spurs’ then-manager Mauricio Pochettino consoled the young striker.

“He put his arm around me, as did all the staff, which kept me going,” Harrison says. “I was really appreciative of that, even though I felt I had let him and the team down.

“It felt like he had put so much faith in me.”

And it was former Spurs striker Vincent Janssen who encouraged him to move to Almere.

“He is a legend at Almere, where he started his career, so I sought his advice and he helped me with the decision to move here,” Harrison says.

“I am trying to emulate his path, as Vinny went from Almere to AZ Alkmaar in the Eredivisie, and then to the Premier League.”

Harrison, who was raised in nearby Hornsey, spent 12 years at Spurs, where his contemporaries included Harry Winks, Josh Onomah and Kyle Walker-Peters.

He stepped up to train with the first team when he was 18 and was part of various matchday squads in the Europa League.

“I was training alongside some of the best players in the world, like Christian Eriksen and Harry Kane, so every training session was a learning curve and I took what I could from each of them.

“All the boys treated me as if I had been part of the first-team squad for years.”

Due to be on the bench in Spurs’ League Cup game against Gillingham in the round prior the decisive tie at Liverpool, Harrison missed out because of injury and was unsure whether he would be involved at Anfield.

“I got myself fit in the build-up to Liverpool, but it was only when we got to Anfield that I was told I would be a substitute,” he says.

“When I was getting ready to come off the bench, the gaffer told me to enjoy the moment. I knew that I just had to play my game because that had got me into the position I was in.

“I was more excited than nervous and Anfield was full to the brim. I had never experienced a crowd like it, they were so loud and passionate.”

Then came the fateful moment when he missed out on a debut goal. It led to loan spells in the lower divisions with Yeovil and Southend, which were a world away from what he was used to at Spurs.

“Despite the lesser facilities, I do think younger players need to have those experiences,” Harrison says.

“Being at Yeovil especially was the opposite of what I had Spurs, and the playing style was not suited to what I liked, but I took so much from it. It was the first time I had lived away from home.”

He swapped Somerset and Essex for Australia in January 2019, joining Melbourne City and scoring four times in 11 appearances.

Warren Joyce, the club’s then-manager had previously been in charge of Manchester United’s Under-23s and had watched Harrison in action numerous times.

“Going to Melbourne was really beneficial. The club is owned by the same people behind Manchester City, so everything was top class.

“The weather was amazing, the facilities were state of the art, and Warren took me under his wing and really helped develop me.”

After his contract expired at Spurs in the summer, the 22-year-old could have joined Salford City after Joyce was appointed head of their development squad, but he decided Almere would be a better opportunity.

He has netted seven times in 20 games for the club, who sit one place outside the promotion play-off standings.

“Most of the people at the club speak English, which is good because I can’t speak a word of Dutch!” he says, having based himself in Amsterdam, a half-hour’s drive from the training ground.

“I do think more young British players should go abroad – look at Jadon (Sancho), who is the perfect example.

“You grow up living by yourself, as opposed to being at a top club in England, where everything is done for you. It is a big step going abroad, but it has benefited me massively.”

Harrison has become something of a cult hero at Almere, not least for an incident in October in the wake of his goal against Go Ahead Eagles which went viral on social media.

“We were hugging after the goal and something caught my eye which, it turned out, was a cup of beer. It was coming at an angle which was perfect for me to catch and instinct took over, so I had a little swig of it.”

While his pathway is proving to be more of a circuitous one than it has been for the likes of Kane and Rashford, he is determined it will lead him back to the Premier League.

“I will get to where I want to be, which is the top level, even if it takes me longer than I initially thought. I still believe in myself.”

Kane has even been on hand to offer advice.

“Harry has helped me whenever I have asked him something, such as what I could have done better in a certain situation. He is one of the nicest guys you could wish to meet.”

Like Harrison, Kane was also sent on loan numerous times before heading back to his beloved Spurs and becoming one of their all-time greats.

With his positive attitude and determination, don’t bet against Harrison imitating Kane and establishing himself among English football’s highest level.