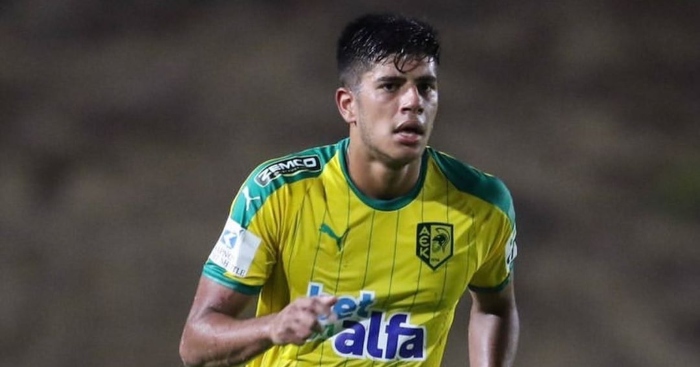 Cyprus may be known as a tourist hotspot, but life has certainly not been a holiday for Sim Thandi since he arrived on the Mediterranean island in the summer.

Since then, the 20-year-old has played in the Europa League and is a regular in AEK’s side as they bid to secure a first league title.

The Cypriot city is a long way, however, from Sim’s beginnings in the East Midlands, where he dreamed of playing for Leicester City.

“Being from India, my parents wanted me to be a doctor or a dentist, or something along those lines,” says Thandi, who was raised in a Sikh family by parents from the Punjab region of India. “They got me involved in a local football team because I was active as a young boy and would run around a lot, so they decided it would keep me busy.

“When I started to play football for a local team, other parents took notice of me and told my parents I was really good and advanced compared to the other kids. My parents did not have too much of an idea about football, though.”

Scouted by Leicester, he joined the Foxes’ academy at the tender age of eight.

“When I was 10 or 11, the club started giving complimentary tickets to those of us who were in the academy,” he says. “But I had to beg my dad to take me to the games because he was not a massive football fan.”

PICTURED: Sim Thandi gets in front of Joao Cardoso to win possession for #lcfcu19s pic.twitter.com/qrS5YEkSYg

There are around 3.5 million people of South Asian descent living in Britain, and it has now been six years since the Football Association outlined its intentions to come up with a plan to help British Asians make an impact on English football.

Yet by the end of last season, only four players of South Asian descent had played in the Premier League: Neil Taylor, Michael Chopra, Hamza Choudhury (who was a contemporary of Thandi’s at Leicester) and Zesh Rehman.

Today, according to the Professional Footballers’ Association, there are 12 British players of South Asian heritage with professional contracts, as well as five scholars who have come through their clubs’ academies.

“When I was younger, I played football just for the enjoyment and my parents were not like the others, who wanted their kids to become professional footballers,” says Thandi, who attended a Punjabi school.

“They did not understand until I was 14 or 15 that there was a chance that I could turn pro because they did not understand that playing football could be an actual career. My parents made sure I took my education seriously so I had something to fall back on, because becoming a footballer and staying in the game can be a precarious situation.

His work at school paid off too, as he landed 10 A-C grades in his GCSEs, including an A* in maths and As in English, French, chemistry, physics and physical education.

A practising Sikh – Thandi worships at a local gurdwara in Larnaca – the defender has been exposed to racism in the game.

“It was nothing too serious and I have never been excluded because of my race,” Thandi says. “I have had a few comments here and there, but you have to be mentally strong when you are a footballer.

“Some people will say I have to take it, although I know I shouldn’t have to.”

Sim spent a decade at Leicester, where his team-mates included Choudhury and Harvey Barnes. He was also a ball boy during the club’s miraculous 2015-2016 season when they won the Premier League under Claudio Ranieri, and he regularly took part in first-team training sessions with Vardy, Mahrez and co.

A regular for the club’s under-18s, reality hit home in the summer of 2018 when he was told he would not be offered a new contract, although Leicester’s academy did later contact his agent about the possibility of staying.

“I thought I was doing well at Leicester, so it came as a shock,” he says. “It didn’t phase me, though, and I took it OK because I thought to myself it was not the end of the world. There were still plenty of clubs out there.”

He signed a one-year deal at Stoke after a successful trial and nailed down a place in the Potters’ under-23s team under the tutelage of Kevin Russell.

He also played in Stoke’s EFL Trophy game against Port Vale in December 2018, which was the first meeting between the fierce rivals for 16 years.

“Playing under-23s football was a great experience for me because the standard was high. Obviously playing against Port Vale was good, too, because there is such a big rivalry there, and because I played in front of 8,000 fans.”

After only a year in Staffordshire, however, he was not sure his future lay in the Potteries, with the likes of Tom Edwards and others challenging for the right-back spot.

Thandi signed a two-year deal with the Cypriots, and Humphrey also brought his close friend and former Leicester team-mate Joey Keaveny to the club. Keaveny, a striker, and Thandi now live together in Larnaca.

Since coming off the bench for AEK against Levski Sofia in a Europa League qualifier in August, Thandi has not been part of a losing side.

What a win! Important 3 points against good opposition. Strong performance from the lads 💪🏽 Thank you to all the fans for your consistent support 👏🏽 #pameaek

“I must be the team’s lucky charm,” Thandi laughs. “I knew a little bit about Cypriot football because APOEL (Nicosia) and Anorthosis (Famagusta) had both played in the Champions League.

“The league is a good standard and there is a great set-up at AEK with the facilities. The pitches are beautiful. The main thing was adapting to playing in the heat, because in July and August it was 35 degrees or more every day.

“We have a big fan base, too. I have been pleasantly surprised by how good the players are here; it is physically and technically competitive. There are also some well-known players over here, like Jason Puncheon, who is at Pafos.”

The Spanish influence at AEK is strong, with 11 of the squad hailing from the country.

“Some of the guys have great experience, like Mikel Gonzalez, who played 200 games for Real Sociedad. It is a great experience to train with them every day, because I am learning a lot and am becoming physically and technically better.

“It is about continuing to learn and gain experience.”

Choudhury and Barnes, have both become regulars in the Premier League for Leicester, but there is no tinge of envy from their former team-mate.

“They deserve it because they have both worked really hard,” says Thandi, who has represented England Under-17s against Portugal, Germany and Holland.

“I am proud that I have played with them, but I am still young and there is plenty of time ahead of me. Hamza and Harvey’s success only inspires me. I have taken another pathway to try and get to their level.”

The story of Frank Soo, the only Asian footballer to ever play for England