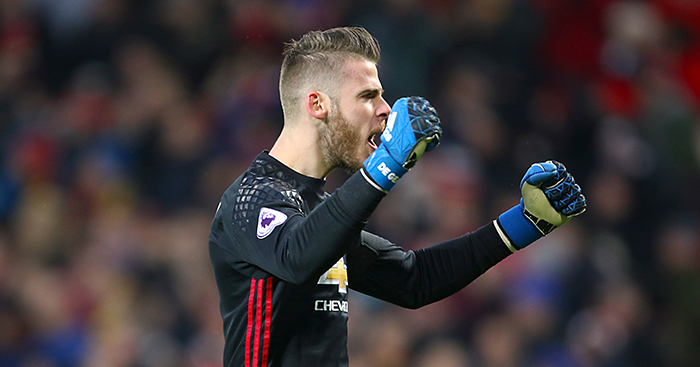 On June 29, 2011, Manchester United signed David de Gea for £18.9million, making him the second most expensive goalkeeper in history. It’s proven to be money extremely well spent, but it certainly didn’t appear that way initially.

“We had a bad period trying to replace Peter Schmeichel,’’ conceded Sir Alex Ferguson in his autobiography. ‘’It’s maybe not my strong point.”

It’s hard to believe now, but there was a time when many believed Ferguson had got it spectacularly wrong again with David de Gea.

The Spaniard moved to Old Trafford as a successor to Edwin van der Sar, but at 20 he appeared utterly incapable of filling the Dutch veteran’s gloves, in both a literal and metaphorical sense.

We all know now that Ferguson’s choice proved to be masterstroke in the long term. But very few would have expected that to be the case when De Gea was being drowned by his untucked jersey and the weight of expectation. 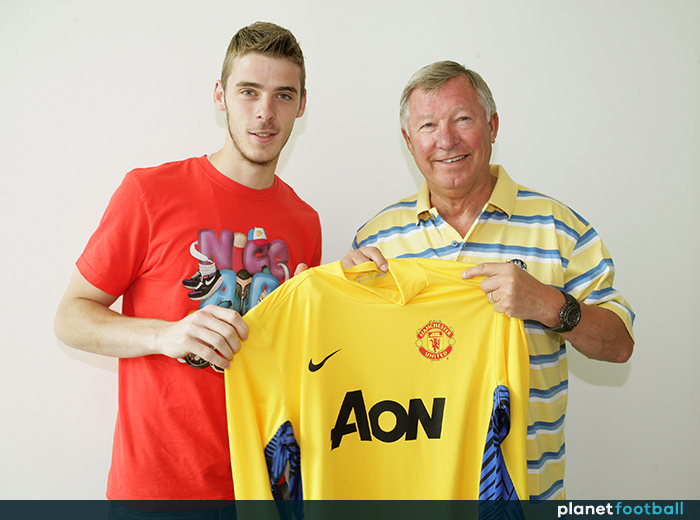 It is difficult to overstate just how miserable De Gea’s early days at United were.

Ferguson had described De Gea as an “outstanding replacement” for Van der Sar upon his signing, praising his speed, pressure and composure, and he needed every ounce of that composure in his early days at Old Trafford.

In the face of criticism so strong it often crossed over into mockery, more sensitive characters would undoubtedly have crumbled.

Was it justified? Perhaps not the gleeful way much of the criticism was delivered, but absolutely no one could make a justifiable case to suggest De Gea was proving himself worthy of the No.1 jersey at Old Trafford.

HIs competitive debut came against Manchester City in the Community Shield at Wembley, where fingers were pointed at the keeper, perhaps harshly, for both goals United conceded in a come-from-behind win over their derby rivals.

His Premier League debut was a similar story, with Shane Long’s tame shot slipping underneath the Spaniard, who was once against bailed out by his team-mates. 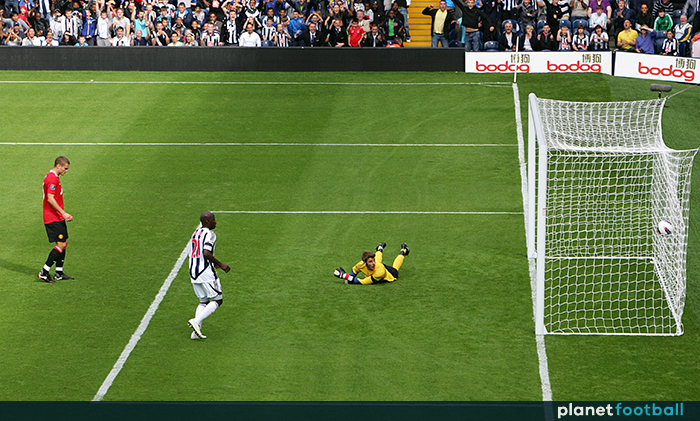 De Gea was rescued by his team-mates on a number of occasions during the the first half of his debut season in the Premier League, but the press were far less forgiving.

James Ducker in The Times described De Gea as like “a kid who won a competition to play in goal for Manchester United,” while Patrick Barclay commented on the same paper’s podcast: “The goalie is like a jelly. He isn’t physically capable. He’s Heurelho Gomes without the shot-stopping.

Mick Dennis was equally as damning in the Daily Express: “He’s called David de Gea Quintana. But don’t bother learning all those names. There will be another chap along soon. There has to be.”

The likelihood of that possibility increased when De Gea’s mistakes started to become costly around Christmas.

An error that would embarrass a schoolboy sent United tumbling out of the Champions League in Basel, while a horror show against Blackburn in a New Year’s Eve 3-2 defeat at home to Steve Kean’s Blackburn saw United waste the opportunity to make up ground on Premier League leaders City. That was too much for Ferguson.

De Gea began 2012 on the United bench as the “horrendous” six months Steele referred to took their toll.

The coach, who picked up Spanish because De Gea was “lazy in his desire to learn English”, elaborated on the keeper’s problems and how the club helped him in an interview with fanzine United We Stand in 2013.

“One issue with him was that he was just 71 kilos. We worked with him on and off the field to make him more powerful. We changed his lifestyle. He would finish training and want to go home. When I told him to come back in the afternoon he’d ask: ‘Why?’ 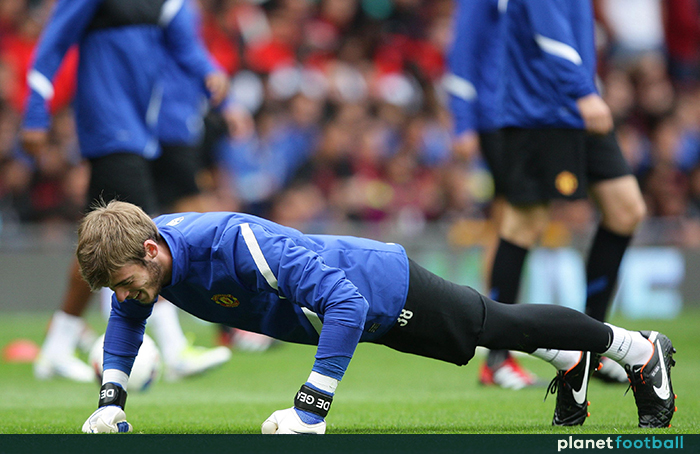 “There were lifestyle issues. He’d sleep two or three times a day. He’d have his main meal late at night. He’d eat too many tacos.

“We pushed protein drinks on him straight after training. We physically made him drink. We had him in the gym a lot. He hated it. They don’t do the gym in Spain as much. We needed to build his core strength.

“I told him he needed to train better, that he was on show every day. There were times in his first season when he trained poorly. I told him that players made decisions for managers, not the other way around. That he should be first, not last out for training.”

De Gea spent four matches watching on from the bench before Anders Lindegaard saw his opportunity to stake his claim to the No.1 spot ruined by injury.

This time the Spaniard seized his chance, returning for the 3-3 draw at Chelsea, a game Steele described as “a turning point” for his young keeper following a barely-believable injury-time save to keep Juan Mata’s free-kick out of the top corner.

“He came off the field and he’d grown another couple of inches,” said Steele. “From then on, he could say: ‘Now I’ve shown people what I’m about’.”

United subsequently went on a run of eight successive victories to climb above City at the Premier League summit, while De Gea’s form began to provide evidence of an improved attitude on the training ground.

Ferguson was impressed: “David has stood up as a man. He got a grip of it, he didn’t let it get to him and the boy has improved every game.”

Ferguson soon had the smile wiped from his face as United surrendered top spot with two games remaining following defeats at Wigan, City and an inexplicable 4-4 home draw with Everton. City pipped them to the title by virtue of goal difference.

So tight were the margins that questions were inevitably asked whether the goalkeeper had again been Ferguson’s downfall. De Gea had been directly culpable for at half a dozen goals before he was dropped at New Year, and you could shine a light upon at least three others.

The following season, Ferguson showed rather less patience with De Gea. One mistake during the second Premier League game – a 3-2 home win over Fulham – led to another spell on the bench for the Spaniard and a warning that he had to fight with Lindegaard for the No.1 spot.

“The most important thing I am trying to achieve is to give them both experience of the English game,” Ferguson said. “They are both young so I am happy alternating them. That’s the policy I am adopting and I am happy with that situation.”

Ferguson continued to rotate until December, when he finally settled on De Gea, and from that point on the United boss remained steadfast in his support for the young keeper.

More importantly, he stuck with him as first choice, even when a weak punch led to a last-gasp Tottenham equaliser and two more blown points in United.

“You have to listen to some idiots in the game. It is better we deal with David de Gea rather than the press deal with him,” Ferguson said after that game. “We are quite good at that. He had a fantastic game and was 30 seconds away from that.

“It is unfortunate for the lad but he has to deal with it. We will help him. Outfield players maybe make 20 mistakes in a game. But goalkeepers are in a crucial position. We are OK with him.”

There is no doubt Ferguson’s confidence in his recruit waivered, but the Champions League trip to De Gea’s hometown in February 2013 to face Jose Mourinho’s Real Madrid confirmed the manager’s faith was well placed.

De Gea shone to earn United a 1-1 draw, making two particularly impressive stops to deny Fabio Coentrao – the first a diving save to turn a low drive on to the post, the second a kick-save from a header which showcased De Gea’s tendency to use his feet as a barrier, as well as a wand with which to deliver the ball on demand anywhere around the pitch.

From strength to strength

From that point in Madrid, 20 months after arriving in Manchester from the Spanish capital, De Gea has gone from strength to strength.

Despite Ferguson and Steele’s exits, the keeper continued to develop into the goalkeeper both coaches believed he could be, which was handy for United given their struggles since the great manager’s departure four years ago.

De Gea won United’s Player of the Year award three times in succession before Ander Herera broke his streak in 2016-17, and he is now his nation’s undisputed No.1, having finally taken the gloves from Iker Casillas.

Real Madrid remain obsessed with the idea of bringing back the goalkeeping Galactico to his hometown – but it’s a deal they will only achieve by making De Gea the most expensive goalkeeper in history.

Those first 18 months in England seem an awful long time ago now.