Searching for the most red cards ever given in one game – answer: *36* 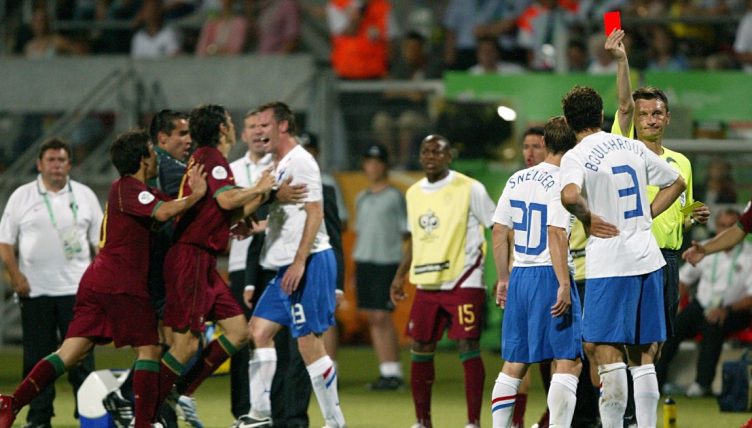 Sometimes, you can just sense it coming. The tension building, the tackles flying in, the all-out rage of a Sunday league game being transferred onto the professional stage.

On such occasions, when everything explodes out of all control, referees are left with little other option but to reach into their pockets and brandish the dreaded red card.

Often, even in the event of a ruck, one symbolic red for the worst offender on each side suffices. But when that does not do the trick, officials have to send multiple players to the dressing rooms, occasionally even causing games to be abandoned .

But what is the highest number of red cards ever witnessed in a single game of football? We’re here to find out.

Starting at the very pinnacle of the sport, the World Cup, there have been a few encounters completed the ‘Battle of [insert place name here]’.

Notably, there are three from the relatively early years of the competition: first, a game between Czechoslovakia and Brazil in 1938 in Bordeaux; next, a rough-and-tumble affair in 1954 between Hungary and Brazil in Berne; and third, the ‘Battle of Santiago’ – a fight as much as a football match, that pitted the 1962 hosts Chile against Italy.

The last of those is perhaps the most famous, and was introduced thus by BBC reporter David Coleman: “The game you’re about to see is the most stupid, appalling, disgusting, disgraceful exhibition of football possibly in the history of the game. ” Count us in, Dave.

Still, only two players were sent off in that match, and just three were dismissed – no red cards yet, remember, they weren’t introduced until 1970 – in the Battles of Bordeaux and Berne, despite two Czechoslovak players sustaining broken limbs in a brawl in the latter.

The most cards in a single World Cup game actually came much later, though, in the ‘Battle of Nuremberg’ in 2006. A second-round match between Holland and Portugal produced 16 yellows and four reds for a series of fouls and numerous incidents of aggression.

It could easily have been five, too, as Luis Figo got away with headbutting Mark van Bommel while Cristiano Ronaldo was reduced to tears by a challenge from Chelsea’s greatest No.9, Khalid Boulahrouz , who was later given his marching orders for a separate challenge .

Sepp Blatter said that referee Valentin Ivanov was at fault and that he deserved a yellow for his performance (which we assume was Blatter’s attempt at humor), a statement the then-FIFA boss was later forced to retract.

Moving on to club football, and starting on our own shores, the British league record for reds a single game is five – which remarkably happened twice in the same tumultuous year.

In February 1997, Plymouth and Chesterfield were the guilty parties. According to Dave Ede, in a letter to the Guardian: “A Plymouth player was sent off for a two-footed challenge, and then four players – including Kevin Davies for Chesterfield – were sent off following a mass brawl in the final minute.”

On December 2, 1997, that despicable episode was followed up by five men being given their marching orders in the Bristol Rovers versus Wigan Athletic match – four of them before half-time.

On the continent, there are a few games that match or top even that.

Most recently, September 2020’s edition of Le Classique – the clash between PSG and Marseille – saw 14 yellows and five reds as a result of a last-minute brawl sparked by an alleged racist insult from Alvaro Gonzalez to Neymar.

But in terms of top-tier European matches, that did not better the 2003 derby between Espanyol and Barcelona. An exciting game ended up getting a little too heated, resulting in six players, including Ricardo Quaresma and Philip Cocu, being sent for an early bath.

Barcelona won 3-1, with Patrick Kluivert getting two and Ronaldinho the other after Jordi Cruyff had given Espanyol the lead. Notably, all the red cards came after the four goals and each from a separate incident, making it one of the few games in our search that did not feature fisticuffs.

Staying in Spain, but going down a few divisions, there is a match that outdoes that Catalan derby more than three-fold. In 2009, in a regional league encounter between Recreativo Linense and Saladillo de Algeciras, a red card for one of the Recreativo players sparked a royal rumble involving both teams and some of those in the crowd, resulting in a total of 19 sending offs.

Recreativo coach Sebastian Naranjo told Spanish radio after the game: “The players who intervened, and even the spectators, were just trying to see that things didn’t get worse. I don’t know what happened to the guy… The referee has set a new record.”

It was reported as a record at the time, too. Those reports, however, were mistaken. To see why, we will have to hop on a transatlantic flight to Paraguay.

Firstly, though, a few honourable mentions from elsewhere on the South American continent – all in the fabled (and, let’s face it, violent) Copa Libertadores.

Going back to 1983, a game in the semi-final group stage between Gremio and the notorious Estudiantes de la Plata of Carlos Bilardo threw up four red cards and quite a remarkable feat in front of a vicious crowd.

All four of the sendings off were of Estudiantes players, dismissed for various degrees of assault on their opponents. Yet with only seven men, they managed to come back from 3-1 down to draw 3-3 with two late goals and save themselves from elimination.

“It’s impossible to explain,” said Estudiantes player Claudio Gugnali years later. “I always talked to [Alejandro] Sabella. ‘How did we do it? How were we positioned?’ It was a 2-2-2 and the goalkeeper. Sometimes people ask why there weren’t five more minutes of extra time. I think if there had been, Gremio would have won 7-3.”

Gremio were involved in another card-fest more recently, when they faced bitter local rivals Internacional in the Libertadores in 2020. This time, though, they were as much culprit as victim.

A 10-minute stoppage-time brawl produced an arresting image of Inter’s Edenilson throttling Gremio player Luciano and resulted in eight reds, four on each side.

That is not the most dismissals in a single Libertadores game, however. That record belongs to a Boca Juniors versus Sporting Cristal match from 1971. Playing in the Bombonera, Boca needed a win to go through to the next round. But with a minute left to go and the score at 2-2, the referee waved away a penalty claim.

Incensed, Boca’s Ruben Sune, whose reputation as a nutcase was well established by that point, chased after Sporting Cristal and the Peru national team’s star player Alberto Gallardo. “He was scared and he was right to be,” Sune said later, “because if I’d caught him, I’d have killed him.”

Quite why Sune aimed his ire at Gallardo is unclear, but the ensuing fracas resulted in the expulsion of 19 players – two Boca players and the Sporting Cristal ‘keeper were the only ones to escape – and the abandonment of the match.

Some of them were even arrested, with players from opposing sides reportedly spending the night in a cell together laughing the episode off.

That brings us to the game that, when that 19-red-card game in Spain happened, was actually the official Guinness World Record holder. Despite the reports that 19 was a new world best – if best is the right word here – there had been a match 16 years prior in Paraguay that had gone one better.

In 1993, a third division game between Sportivo Ameliano and General Caballero turned into a mass fight when two Sportivo players were sent off. The ruck reportedly lasted 10 minutes and, when the dust had settled, the referee showed a further 18 reds.

If we are talking strictly about red cards, then that game, with a total of 20, was indeed the record holder for a time. But if we go back to before the introduction of the card system in 1970, then there had been a bust-up in Brazil that had beaten even that Paraguayan debacle.

On June 20, 1954, the Botafogo of Mane Garrincha took on Portuguesa at the Pacaembu stadium in Sao Paulo. With Portuguesa having taken the lead in the second half and trying to waste time, the Botafogo defender Thome got riled up, whacked Portuguesa’s Ortega and, of course, an enormous battle broke out.

All of the players, the reserves and the coaching staff got involved, kicking and punching each other while the referee Carlos de Oliveira Monteiro watched on helplessly.

When things calmed down a little, he decided to put an end to his torrid afternoon by sending off all 22 of the players who had started the game.

In 2011, though, both of those records – for the most sendings off and most red cards – were surpassed, leaving us with an outright winner. Drum roll, please.

An Argentinian fifth-tier game between Claypole and Victoriano Arenas started badly, with two players sent off before half-time. In the second period, things only got worse and chaos ensued, a brawl erupting that saw coaches, players and fans alike diving in with fists flying and boots kicking.

The ref, Damiano Rubino, went a step further than his mid-century Brazilian counterpart, sending off all 20 of the remaining players on the field, as well as 14 subs and coaches, taking us up to a whopping total of 36.

Claypole boss Sergio Micielli reckoned Rubino had been a bit harsh. “Most players were trying to separate people,” he said. “The reference was confused.”

A year later, the same number of players were sent off in a game in Paraguay, but as it was in a youth tie, we’re saying the outright title for most reds stays with Claypole and Victoriano Arenas.