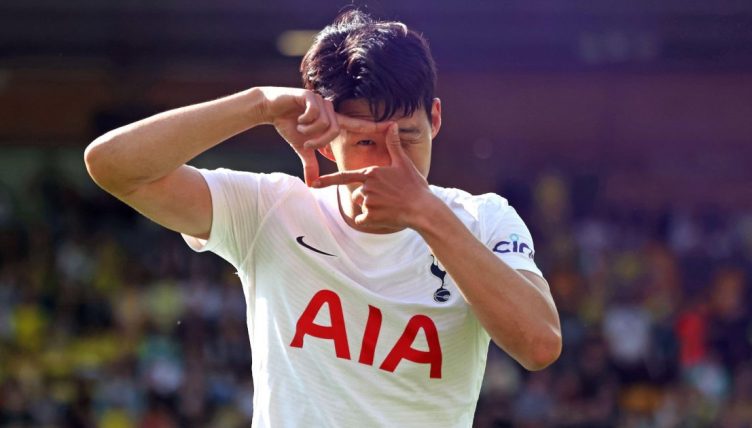 Many eyebrows were raised when Son Heung-min was not on the shortlist for the PFA Player of the Season award – and the stats certainly do not justify the Tottenham forward’s omission.

At one stage of the 2021-22 Premier League season, Liverpool’s Mohammed Salah looked set to run away with the Golden Boot, the Egyptian hitting 16 goals before heading away to the Africa Cup of Nations in January. However, his goalscoring slowed in the second half of the season, meaning he didn’t score the 30 goals he looked set to.

Instead, he finished on 23, which was still an excellent goalscoring season and enough for the Golden Boot. It wasn’t enough to win it outright, though, as he shared the award with Tottenham’s Son Heung-min. Yet the Liverpool forward has been shortlisted for the PFA Player of the Year award, while Son has been snubbed. Son’s team-mate – and provider of many of the assists for his goals – Harry Kane also made the shortlist, but many were surprised to see the joint top scorer in the league missing out on the six-man list.

When considering the data, it’s very hard to understand why the South Korean has been left out.

First, let’s look at the list of the top ten goalscorers in the Premier League in 2022. 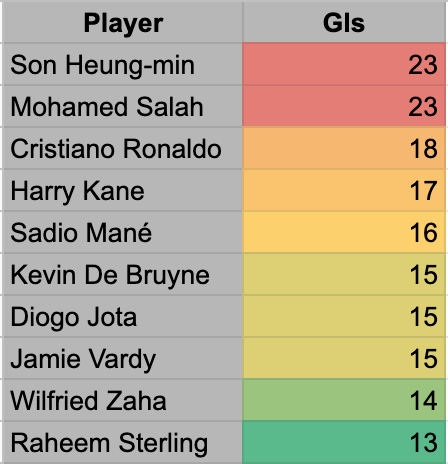 As you can see, Son tops the list with Salah. Behind them is Cristiano Ronaldo, another player who notably made the cut for the PFA award. Indeed, of the top six, Son is the only one not to have been nominated.

And his omission only looks stranger if we add another column, goals minus penalties. 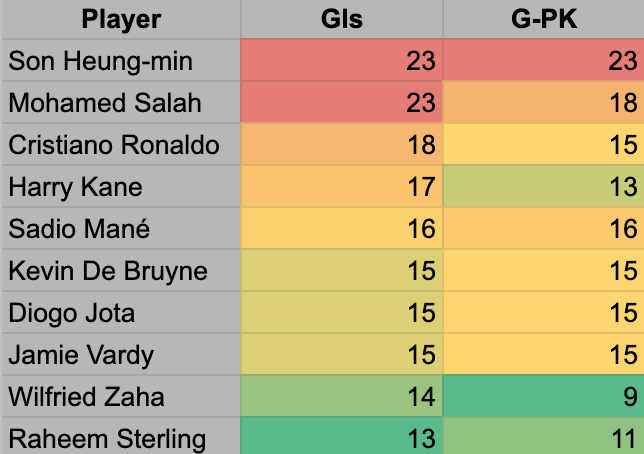 The list is still organised with the overall top scorers, but the colour scale shows the true order, with red signifying the highest number. Son scored five more non-penalty goals than Salah and eight more than Ronaldo. Meanwhile, Kane  – who has always been thought of as the main goalscorer of the two – finished with ten goals fewer than his team-mate.

Why such a goalscoring leap?

In 2020-21, Son scored 17 Premier League goals, which was the first time in his career he had broken 15 league goals. He flourished under Jose Mourinho, as his pace running in behind had got him plenty of goalscoring opportunities on the break.

Adding another six non-penalty goals in 2021-22 is an impressive feat, especially when considering the fact that he had only scored four times in the league before Antonio Conte took over the managerial role in November.

Explaining why he made that jump is fairly simple. The South Korean has been getting in far better positions to score goals.

Last season, Son scored 17 non-penalty goals from 10.3 expected goals, according to FBRef. That means he overperformed his expectation by 6.7 goals. This kind of performance would usually not be repeated, as the law of averages suggests that most players will revert to their expectations and he just had the finishing season of his life.

Looking further back over Son’s career, he has beaten his xG for the last five years in a row, racking up a whopping total of 21.5 goals beyond expectation.

As you can see from this visual from Statsbomb, Son’s expected goals took a huge leap this season under Conte. As we have established that he is an elite finisher, he was always likely to explode in terms of output when put in the kinds of positions that mean he ranks in the 96th percentile (up from the 81st last season) for xG among attacking midfielders and wingers in 2021-22.

Just look at the video below, containing all of the forward’s 23 goals for the season. While there are some excellent finishes from difficult angles, there are many goals scored from central areas between the six-yard box and the penalty spot, which is the area from which most goals are scored, statistically.

Also, note the number of one-on-ones, with the goal against Leeds United a great example of how Kane and Son’s partnership works in action as the England captain drops deep to release his partner beyond a high line. Son’s finish is then excellent, as he gets clear of the defence before slowing up to take a breath, sort his feet out and pick his spot to finish.

A special season for #Sonny

🎥 Every one of his 23 Premier League goals pic.twitter.com/ol2BPhhSaJ

In the case of the most regular goalscorers, they are often shot monsters. They score a lot of goals because they take a lot of shots. Sometimes it’s just that simple.

Again, the colour scale is used so that red indicates the highest number, with green the lowest.

Note that Son is the top scorer but only the sixth-highest for total shots. Salah took 48 more shots and ended up with the same goals total. In fact, if Son had taken the same amount of shots as Salah and maintained his own goals-per-shot ratio, he would have scored 36 goals.

Son didn’t pepper the opponent’s goal, but when he did shoot, he hit the target more often than not and scored at a rate that only Jamie Vardy could match or better.

It’s important to recognise that this is most likely to be because Conte’s tactics managed to regularly get Son into space to finish. In the case of Liverpool and Manchester City, they were so often camped on the edge of their opponent’s box and without space to run into to finish as Son profited from.

However, Conte should be applauded for coming up with a tactic which best worked to the strengths of his two standout players in Kane and Son.

While the two forwards could be out of the game for long periods as their team let opponents have the ball far more than possession dominant teams like the top two, when they do win it, everything is set up for their star attackers to do maximum damage and that saw them win their place back in the top four at the end of the season.

Will he be overlooked in the future?

It already seems strange enough that the top scorer in the Premier League wasn’t up for the major end of season awards. If Son can produce anything near the same kind of performance next season, it would be a real surprise to see him miss out on more recognition.

While Son may have had a season of a lifetime, these awards do tend to go to the players competing in the title race, which could be a reason why the South Korean missed out. However, that doesn’t quite wash when considering Ronaldo’s place on the shortlist.

One thing that should be remembered, though, is that Conte is a serial winner. Gatecrashing the current top two will be an extremely difficult task, given their recent dominance over the division, but Conte has a summer to improve this team tactically and with signings such as recent arrival Ivan Perisic.

If he can get another elite season out of Son, in addition to raising the level of the team around him, Spurs could be the challengers to the top two. If that were to happen, there is no way Asia’s biggest football star could be snubbed again.