Soteldo and Marinho: The magic Santos stars bringing joy to the Libertadores 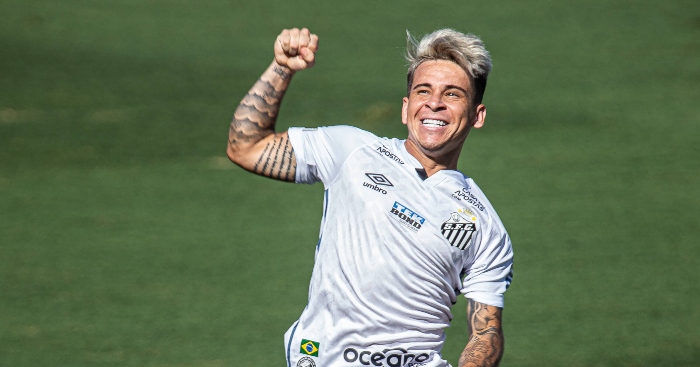 The Copa Libertadores final is the dream fixture for any South American footballer. It is the competition they work all their lives to win and bringing home the trophy makes them immortal in the eyes of fans.

Don’t believe us? Just ask Deco. In 2012, when he was back in his native Brazil with Fluminense, he was asked by Goal what he would give to win the Libertadores. His reply: “Both my Champions League medals.”

On Saturday, Palmeiras and Santos will look to fulfil that dream. But for Palmeiras’ full-backs, the game in Rio’s Maracana will currently be haunting their nightmares.

Santos are a surprise package in this season’s tournament. While they secured a second-place finish in the Brazilian league in 2019, a financial crisis, political instability and managerial turnover made the club something of a basket case in 2020.

Yet through all the chaos, two players have propelled the Peixe forwards throughout the season, jinking and darting up the flanks, twisting defenders’ blood, setting up and scoring goals, and giving everyone looking on a truly thrilling display of wing play at its best.

On the left, meet Marinho: the jet-heeled top scorer in Brazil, and the man in possession of a shot he refers to as his “random mini-missile”.

On the right, meet Yeferson Soteldo: the fleet-footed Venezuelan pocket rocket whose dribbling and delightful dinked crosses make his highlight reel the stuff of fantasy.

If Santos lift their fourth continental title on Saturday night, these are the two men they will have to thank.

Now 30, Marinho has, to say the very least, taken a circuitous route to the top. In his early twenties, he spent no more than a season at a series of clubs, popping up mostly in the Brazilian second division and touring the country’s many state leagues.

He never really made an impact anywhere and was rarely missed when he moved on. But in 2017, his breakthrough finally came at Salvador-based Vitoria. Twenty-one goals earned him a big-money move to Chinese outfit Changchun Yatai and burnished the cult status he had gained for some endearing post-match interviews.

After one game in which he’d scored a brace, he wandered over to pitch-side reporters, took full, personal responsibility for the team’s previous poor form, before being asked whether he regretted removing his shirt in celebration as his third yellow card of the season meant a one-game ban.

“Oh shit,” he replied, on live TV, with a look of surprise on his face that would later become a meme. “I never knew. That’s shit, isn’t it?”

China obviously wasn’t for him as he moved back after a year, going first to Gremio, where he was used sparingly.

Yet a move to Santos in 2019 and a year working under the unhinged Jorge Sampaoli proved his salvation. For the last two years, he has perhaps been the best player in Brazilian domestic football.

His shot, as previously mentioned, is something to behold. And after one particularly thumping effort against Botafogo in July 2019, he referred to it in another entertaining post-match chat as the “random mini-missile”, a line that has stuck.

This year, he has unleashed it with remarkable regularity and unerring accuracy, cutting in from the left with that Arjen Robben-esque, know-it’s-coming-still-can’t-stop-it burst of acceleration and whacking in enough to have made him Brazil’s top scorer this season.

Marinho is more than a thrilling watch and an internet sensation, though. This year he has been a leader in Santos’ young team, helping team-mates like Kaio Jorge, Sandry and Lucas Braga settle in the senior squad.

In July, he proved his courage off the pitch, taking up the fight against racism after a fuck-witted radio ‘personality’ said live on air that Marinho was “stupid” and “should be sent to the slave quarters” after he had been sent off in a Sao Paulo state championship game.

The following day, Marinho posted a video on social media, where, through tears, he said: “I always fight for the cause, because I feel the pain. I know who I am, I know the value I have.

“Everyone goes through this. When it happens, people who don’t have a voice bow their heads and keep walking. Today I have a voice and it still happens… but the courts do not punish these prejudiced vermin.”

Despite the distressing incident, Marinho’s form did not suffer, and in the Libertadores he has been equally as good as he has in the league.

In the round of 16, he scored the winner against LDU de Quito; in the quarter-final, he finished off a brilliant counter-attack in Santos’ 4-1 demolition of Gremio; in the semi-final he peppered the Boca goal from distance and brilliantly set up his team’s third.

On Saturday, Palmeiras will be hard pressed to stop him from repeating the feat. Yet if they are overly focused on stopping Marinho they will leave space to be exploited by another winger who, though completely different in style, is equally as dangerous.

Ask anyone who regularly watches South American football and they will tell you that two of its great pleasures are seeing rising stars shine at the start of the careers and watching players who are still prepared to dribble, as top-level European football increasingly turns into a highly effective yet rather predictable one-touch-pass fest full of mind-numbingly competent automatons.

If you could distil both of those abstracts into a single human being, then 23-year-old Yeferson Soteldo would be your man.

At just 5’2”, the Venezuelan is never going to perform particularly well in aerial duel stats and said in an interview with Conmebol this week that people repeatedly doubted him because of his stature.

But as he pointed out, citing Lionel Messi as an inspiration, height is not the be-all and end-all and a small stature can in some respects be advantageous.

The lowest of low centres of gravity and tree-trunk thighs allow him to change direction and accelerate away before the electrical signals have even been transmitted from the defender’s head to their toes telling them how to react.

Soteldo, who first made his name known outside his homeland with some magical substitute displays at the 2017 Under-20 South American championships, arrived at Santos from Chile’s Universidad Catolica, where fans had never warmed to him.

But that did not stop him enchanting the Santos faithful – known for their appreciation of bold, attacking football – as soon as he pulled on the shirt.

Again, working with an aggressive, attack-minded manager like Sampaoli was fundamental in elevating his game and throughout the 2019 season, he turned heads and opened smiles as wide as the one he wears himself.

His audacity is not just for show, either. Soteldo twists and turns and is fond of a flick and a trick, but there is often an end product in the form of a cutback to the penalty spot or floated cross to the back stick, which he can provide equally well with either foot.

🇻🇪⚽️🇧🇷 The 2⃣3⃣ year-old skillful Venezuelan midfielder has scored 2⃣ goals and dished out 2⃣ assists in 🔟 #Libertadores matches, all while impressing with his bag of tricks. pic.twitter.com/8a2sQ2Hy4B

And though Soteldo is not the most prolific, he can find goals when they are most needed. In the Libertadores semi-final, he cut inside Leonardo Jara and Lisandro Lopez to blast a rocket past Esteban Andrada and get Santos’ second of the night.

In the following game against Botafogo, he got another, which proved to be the winner, completely unnecessarily but absolutely magnificently flicking the ball up for himself before whacking a bicycle kick into the back of the net.

Unfortunately for Peixe supporters, it looks like the Libertadores may well be his last game in the club’s black and white shirt. If he can help Santos to their fourth Libertadores title, though, it will be some way to sign off.

In an odd arrangement, his contract is still half-owned by Chilean club Huachipato, and with Santos unable to afford the transfer fee that they promised for their 50%, Huachipato are looking to move him on for a profit.

There have already been offers from other Brazilian clubs and some in the Middle East, but Soteldo is not interested. “I want to go to Europe,” he said last year.

“I’ve always dreamed of playing for Manchester United, and that dream remains. There are a lot of steps to get there, but I feel that I can.”

And, Ole, if you’re reading, we feel that you should hand the man a chance. Soteldo is a bringer of joy, let him bring it to the Premier League.