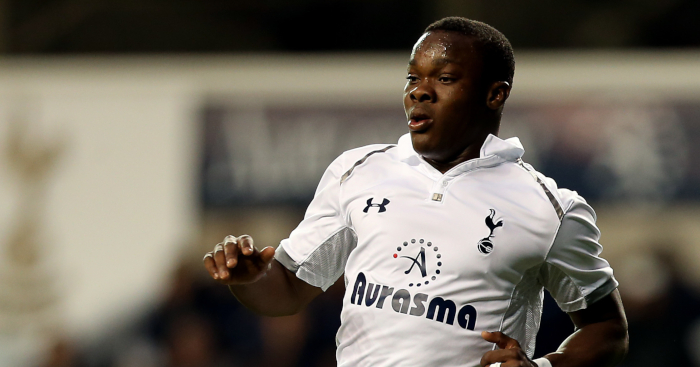 As Partick Thistle celebrated a 3-0 victory over Queen of the South, which confirmed their Scottish Championship status on the final day of the season, it marked the end of a forgettable campaign for the club and their marquee signing.

For striker Souleymane Coulibaly it was a relief that the campaign had finished, one that never got started for the Ivorian once dubbed the ‘New Drogba’.

The former Spurs youngster joined the club last summer after a fractious spell in Egypt resulted in legal proceedings and 18 months out of the game but, hoping for a fresh start in the country he had previously done so well in for Kilmarnock, Coulibaly was banished to the reserves by the end of the season, playing in a team full of kids and not even involved in the relegation battle.

The 24-year-old had been signed by Alan Archibald, but Scotland’s second longest-serving boss was sacked in October and replaced by Gary Caldwell. Things quickly went downhill from there for the man who scored 11 goals in 26 appearances for Killie back in 2015-16.

“It’s been very tough, especially when you fight back from an injury to come back stronger and then not be given a chance under the new manager,” Coulibaly says.

“At the start of the year the other manager gave me chances in one or two games, but this one has never given me a chance. I have only played five minutes under him, I’ve never been given the chance to play one or two games.

“He has told me many times I am going to play and that he needs me, but nothing changes. When I ask him he says I am not ready and he just keeps giving me excuses. At the end of the day, when you understand your position you just need to put your head down for the new season.

“Every manager I have played for I’ve had a good relationship with, even if I am not playing they will tell me why, saying things like, ‘I want more from you,’ but when I am playing for a manager who tells you you’re playing on Saturday and then he puts you in the stand…

“Sometimes the team is doing well so you can understand if you’re not playing. But they were in a bad position and not doing well.”

This is all a far cry from Coulibaly winning the Golden Boot at the Under-17 World Championships in 2011, when he scored nine goals in just four games for Ivory Coast, resulting in interest from across the world.

It also earned him the unwanted nickname of the ‘New Drogba’, a tag the Ivorian never enjoyed.

“It was quite hard for me, as at the time Didier was an idol, everyone wanted to be him. It was tough for me as I don’t want to compare myself to no one, I am Souleymane Coulibaly, I know my own qualities, I know what I can do.

“Mexico in 2011, I can never forget. It was the best ever. To score nine goals in four games is unbelievable. I used to do that. I got Golden Boot, Young African Player of the Year in 2011, so that was my best moment.”

Manchester United and Real Madrid sought Coulibaly’s services after his exploits in Mexico, but eventually he left Italy, where he had lived since joining his father in the country aged 13, to sign for Tottenham as a 16-year-old.

He was fast-tracked to train with the first team under Harry Redknapp but never played a competitive game for the club.

“There were a lot of clubs after me back then. There was Real Madrid and other big clubs watching me, but I decided to sign for Tottenham because of how they were producing the young players for the future.

“I played with a lot of great players at Tottenham. I was 16 years old, but I was training with the first team every day, with the likes of Jermain Defoe, Peter Crouch, Luka Modric, Gareth Bale, Harry Kane, John Bostock and a lot of other great players.

“I learned a lot from all of them, it was very demanding, but I worked hard for myself to make sure I got the best out of the experience.

“I was just unfortunate that they did not have the current manager there at the time.”

Coulibaly returned to Italy after leaving Spurs, initially joining Bari only to be sent out on loan to Pistoiese immediately for a season.

His form at Rugby Park attracted attention and he moved to Egypt for £800,000 to sign for Al Ahly, but things soured quickly in Africa.

Coulibaly left the country claiming he was owed money, culminating in a long-standing dispute that ended with a FIFA commission ruling the striker in fact owed Al Ahly $1.4million.

The Ivorian was not allowed to play for another club until the money was paid, but this was lifted during an appeal and he was eventually given international clearance to join Partick Thistle for what he thought was a fresh start.

Now he is simply hoping it’s another speed bump on his way to long-term success.

“Those two years have been tough for me personally and in football, but I am sure the next season is going to be good me because we all learn from our mistakes, and from others who won’t give you the chance and those people who want to see you fail.

“In football you never know where your chance will come, but I know I can take it, as I’ve learned a lot from those two years. And I will never return to play in a country like Egypt.

“I am hoping for a good project and a good club to join. I need to enjoy my football again, as I am still young and I’ve been fed up for two years without playing, so next season will be very important for me.”