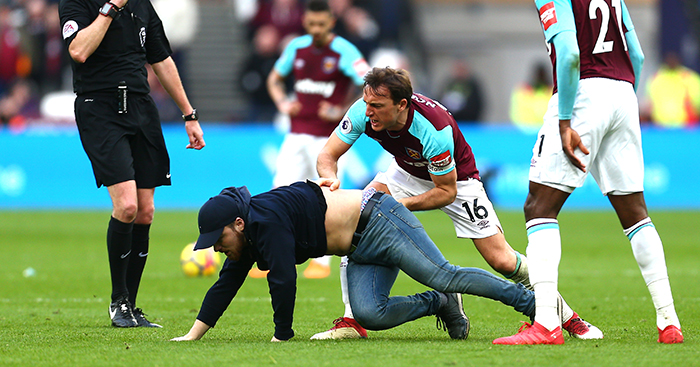 Take a look at the back page of a newspaper or the front page of a sports website. What do you see? Headlines. Words. Adverts.

But what takes up the most space? What catches your attention first? The pictures.

They are absolutely essential to sports journalism: to selling newspapers, attracting readers and telling stories. And yet most of the focus, from just about any perspective, is fixated upon the words that accompany them.

We know the names of football journalists, authors and bloggers. We follow their work, read, watch and listen to their opinions. If we like, we can interact with them on social media.

Ironically for a profession which deals in visuals, photographers fly way below the radar, comfortable behind their long-lens.

But being in close proximity with the action on the field means they can provide plenty of insight and a different outlook on the beautiful game.

Close to the action

Charlotte Wilson, a sports photographer for Offside Sports Photography, knows just how close the action can get, having been present for West Ham’s tempestuous 3-0 defeat by Burnley.

“The guy who Mark Noble pushed in the centre-circle had jumped pretty much over my head so I couldn’t really miss him,” she says.

A GIF I made from a sequence taken on Saturday. Just in case anyone missed the shambles in all its glory. West Ham v Burnley. #premierleague #westhamunited #whufc #marknoble #football #gif #photography #photoshop

“After the second goal had gone in and more people had got on the pitch, I have to say I was no longer looking at the game.

“The fans were fighting among themselves and the crowd had gathered around the directors’ box. There was so much going on and it got to the point where the match didn’t really matter anymore.”

The chaos at the London Stadium is a good example of the pictures leading the news cycle. Without the sharp-eyed snappers on duty, the words describing the madness would hardly have had the same effect.

It is all well and good being close to the action, but the job does come with some pitfalls – literally.

“Sometimes the players can be right on top of you,” Wilson says.

“At Man City they have photographer pits and I’ve seen players fall in them because they come off the pitch at such speed, or celebrate by piling on the top of each other and topple in.”

If you’ve ever been seated behind the goals before kick-off when the two sides are undertaking shooting practise you’ll be familiar with another problem – especially if the quality is low.

“I’ve had the ball hit me in the back of the head before during a warm-up,” Wilson says. “I’ve had so many close calls. You just have to keep an eye out. They do come whizzing past.

“I have had the ball full-on in the face before too. I was at Chelsea Ladies and the ball came out from the goal, deflected by the keeper, and I tried to put my foot up, missed it and it slapped me in the face.

“You have to try not to react to the fans’ response.”

Best seat in the house

It’s not all doom and gloom, of course.

Wilson has shot at the Women’s European Championships, Charity Shield matches, and plenty of big Premier League games over the last three years. She is aware of how lucky she is.

“It’s easy to forget you’re at a game and people have paid to be there,” she says. “It’s happening right on top of you and you’ve got one of the best seats in the house.”

To get everything just right, many photographers turn up several hours before kick-off to scope out the pitch, take stock photos, set up their equipment and enjoy a pre-match pie.

Every ground varies, but snappers tend to prefer to sit in the corners to take in the full panorama and be well-placed for goal celebrations.

But what is it they’re looking for? What is the money-shot?

“Goal celebrations are the most-used [by newspapers], closely followed by the goals,” Wilson explains.

“But if it’s a 0-0 draw they’ll want a nice action picture. I’m just happy if I get a nice picture, no matter what it’s of.

“Celebrations aren’t the be all and end all. It could be that a tackle or an off-the-ball incident will become just as important.”

With every photographer aiming for the back-pages, there’s a mixture of competition and comradery on the touchlines.

“It’s quite friendly because everyone’s there to get a nice picture,” Wilson says.

“But there is a bit of rivalry too. You could be sitting reasonably close to someone and they could get something that you weren’t even looking at over the other side of the pitch while you were looking in a different direction.”

It’s blink and you miss it stuff – and the pressure to frame up a money-maker can sometimes be overwhelming.

Legendary sports snapper Gerry Cranham was sick through nerves at the side of the Wembley pitch before photographing England’s win in the 1966 World Cup final.

“When I started I couldn’t eat before games because I was so nervous,” Wilson adds.

“I’d be pumped with adrenaline to impress and get good pictures. Thankfully I’m a bit more chilled out now.

“But at the Women’s Euros final between the Netherlands and Denmark I could feel my heart going because it’s such a big event. The stadium was packed and my heart rate was going up.”

With eyes either constantly scanning for incidents or trained down a lens, football photographers often see a completely different game to the fans in the stadium, viewers at home and even each other.

But despite the cold, the occasional whack to the face and the pressure to capture the key events, football photographers still revel in bringing us as close to the action as possible.

Next time you pick up a paper think how much effort went into the image staring back at you.