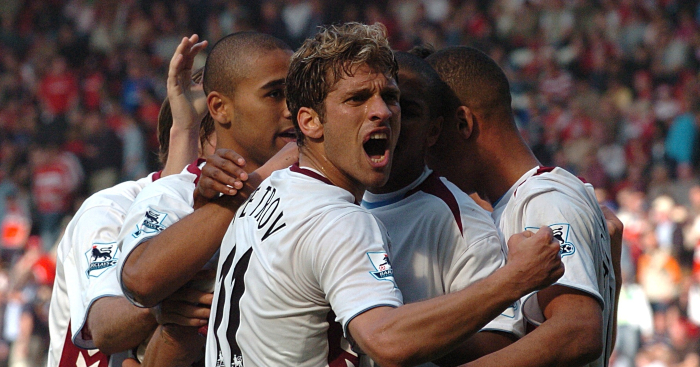 For Aston Villa fans, the idea of Stiliyan Petrov never having arrived at the club doesn’t bear thinking about. But Petrov very nearly went elsewhere, as he revealed on the latest edition of The Broken Metatarsal podcast.

Held in just as high regard by fans of Celtic, Petrov’s seven-and-a-half-year spell in Glasgow came to an end in the summer of 2006. The midfielder made it clear he wanted to leave in order to test himself against the world-class players south of the border.

A reunion with his old Celtic boss Martin O’Neill at Villa Park had been reported in the tabloids and appeared the natural destination, but it was only a swoop late in the window that stopped him signing for Harry Redknapp’s Portsmouth.

“It was a quick twist, that situation,” Petrov says. “What happened is, I was on the way down to sign for Portsmouth. Funnily enough, I think at that time it was in the papers, but Gareth Barry was also a target to play for Harry at Portsmouth.

“Everything was agreed, the fee, personal terms. I remember travelling down from Glasgow with my wife and my kids. I was away on international duty. It was two days before the transfer window was closing so I didn’t have much time.

“We decided to meet up at Manchester Airport, but at about half six in the evening, I got a phone call from Celtic saying they had a bigger bid from Aston Villa. In that time, I didn’t speak with Martin O’Neill, I didn’t know he had an interest in me.

“So all of a sudden Celtic come in and say we had a much bigger bid. Now, you have to speak with Aston Villa. I was like, ‘What’s just happened?’ So I’ve got Harry Redknapp on the phone, you know we had a conversation with him, he was dead honest and very good.

“He said, ‘I’d love to have you here, but we can’t afford to pay the money Aston Villa are offering. I know you’d like to go play with Martin O’Neill and I can’t blame you for that, but please if anything changes, let me know, I admire you as a player and would love to bring you to Portsmouth.'”

Through no lack of endeavour, this was one transfer deadline day in which Redknapp wouldn’t have his way, although he did instead sign Niko Kranjcar to begin a long-running bond with the Croatian.

Petrov, meanwhile, signed a four-year deal with Aston Villa and moved from Celtic for a fee in the region of £6.5million. O’Neill’s first signing at Villa Park, he was reunited with the coach under whom he won three of the four league titles he lifted while playing in Glasgow.

But things weren’t immediately rosy, with that first 2006-07 campaign something of a transitional season ahead of the better times to come.

“I was his first signing, when I walked into the club there were a lot of questions about Martin, a lot of, ‘He’s doing this wrong, he’s doing that wrong,’ so for me it was important to find out the right approach and to tell them it takes time,” says Petrov, speaking courtesy of Player 4 Player.

“When I signed up for Villa, O’Neill said he was going to change the perception of the players’ mentality, he wanted a successful team, to make a lot of changes so I felt like a lot of the players were more insecure and threatened, thinking, ‘I’m not going to be a part of this club, I don’t know what to expect with this manager.’

“He said to me, ‘Stiliyan there will be a lot of changes, a shakey time for a year or so because I’m going to let a lot out and bring a lot in. I would like you to be part of my plans, I think you can fit nicely into what I would like to do.’

“For me, it was very difficult at the start because for the next year or so, I made a lot of friends at the club but obviously some of the players knew they wouldn’t be long-term because Martin made that clear to them.”

Villa finished 11th in Petrov’s debut season before registering three consecutive sixth-place finishes, competing in the UEFA Cup and finishing as runners-up in the League Cup as O’Neill built the side in his image.

Petrov had to adapt to playing a more disciplined role, deeper in midfield, with more focus on nullifying the opposition, showing a new side to his game after regularly hitting double figures for goals at Celtic.

Sure, there was still the odd spectacular strike – the long-range half-volley against Derby gets a special mention, of course – but his standout attributes became clear when he was duelling with the league’s top talents.

The 41-year-old still speaks with relish and enthusiasm about coming up against the “exceptional” Steven Gerrard, studying how Frank Lampard would arrive late in the box and pressing Paul Scholes to stop him progressing the ball up the pitch.

There’s evidently respect for all three, sitting on the fence in the debate around England’s standout midfielder at that time. He’s even diplomatic and bears no grudges against the most irritating players he pitted his wits against.

“Robbie Savage, Danny Murphy,” were Petrov’s go-to names when asked who stood out as a nightmare to play against.

“We always had great battles. Sometimes with Danny, we do media work and talk about it, we always kicked each other – in the right manner.

“Robbie Savage, he’s just a nonsense, he’d just go and he’d kick you and pull your shirt. And you’d just go, ‘Do you know what? Just get away from me man. Just don’t get closer, get away. You’re not really doing anything.’

“He’ll talk nonsense as well. He’d just say things without making sense, but that’s him, sometimes players find their strength and what they can do, how to wind up the opposition.

“And you know what, he had a good career and was successful for what he was. I don’t mind good banter on the pitch – as long as you’re winning.”

Listen to the full episode now to hear more from Stiliyan Petrov on nights out in Newcastle, learning English courtesy of a burger van and the Old Firm.