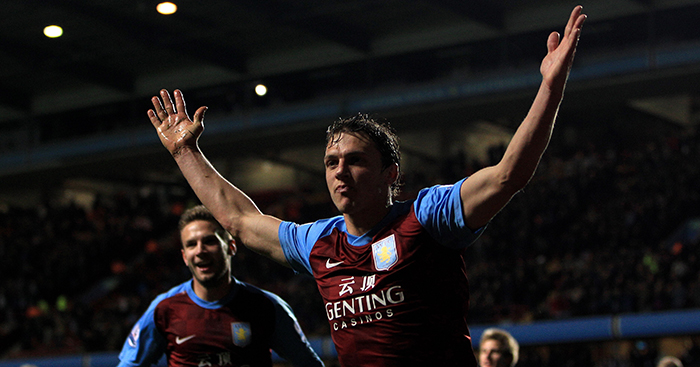 Stephen Warnock enjoyed life at Blackburn Rovers so much that he cried when he left for Aston Villa – and his time in the Midlands proved to be anything but plain sailing.

Warnock joined Blackburn from Liverpool in January 2007 after accepting he would never nail down a starting place at Anfield and with Mark Hughes promising him regular games at Ewood Park.

Helping them finish seventh in the Premier League in his first season at Ewood Park, Warnock even earned his first England call-up under Fabio Capello, justifying his decision to move – but ironically it would be Capello that eventually convinced the left-back to quit for Villa.

“At Liverpool even if I had a good game I knew I probably wasn’t going to start the next one,” Warnock says. “Then Blackburn came in and they said if my form is good I’ll play every game.

“Leaving Liverpool was tough because it was my club, I grew up supporting them, but I knew it was the right thing to go to Blackburn.

“When I joined Blackburn I had a different feeling, I was the manager’s choice, the player he wanted to sign.

“It went well from day one. I just felt that I belonged at the club, whereas at Liverpool I only felt like a youth team player who was just there.

“To leave was a very tough decision. I actually cried when I left, I enjoyed it so much there.

“I knew it was going to be difficult to leave, but I spoke to Fabio Capello and he said that if I wanted to get into the World Cup squad I needed to be competing at a bigger team, I needed to be playing a higher level of football.” 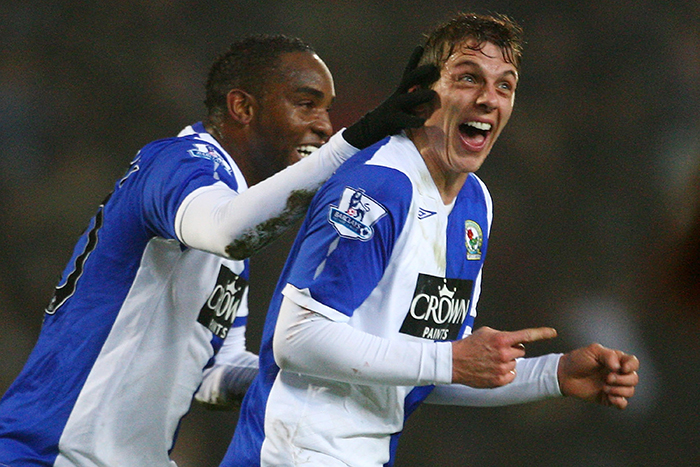 Initially, the move to Villa worked out well for Warnock as he helped them finish sixth in the Premier League in a hugely successful first season under Martin O’Neill at Villa Park.

And just as Capello had promised, it earned Warnock a place in the England squad for the 2010 World Cup in South Africa.

“I was fortunate enough to be signed by Aston Villa, and the decision was the right one as I went to the World Cup, final of the Carling Cup and semi-final of the FA Cup as well,” Warnock says.

“It was one of those seasons that was really good from a personal point of view and from the team’s point of view.

“We should have qualified for the Champions League that year, but we just fell away towards the end of the season which was the only disappointing thing.”

Sadly for Warnock, he did not appear at the World Cup and suffered a much bigger disappointment five days before the start of the 2010-11 season when O’Neill quit as manager.

A month later, Villa appointed Gérard Houllier, Liverpool’s coach when Warnock was in the youth ranks of the club, and tension soon arose.

“I only stayed a few nights a week (in Birmingham) because under Martin O’Neil, we trained hard but had a lot of time off and I had a young family so I thought it would be better to leave them at home where they were. I thought it’d be easier for my wife if I just travelled back and forth.

“When Houllier joined he met with me, Brad Friedel and Emile Heskey asking us to move down, but at that time we couldn’t. He understood our family situations and told us it’s fine as we all agreed we’ll move by next season. 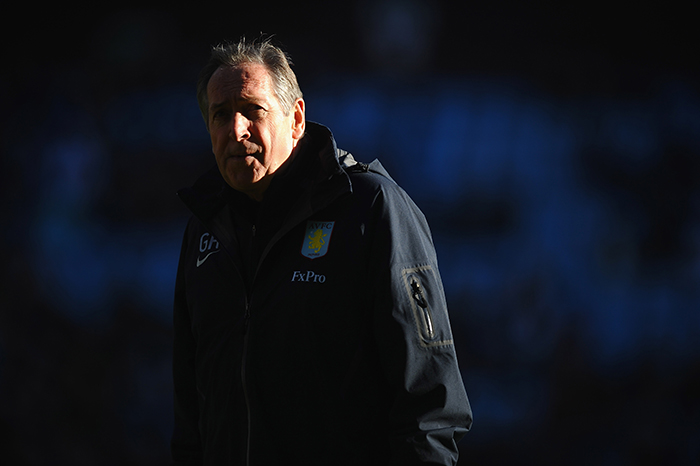 “He told us ‘whenever we play in the North West you don’t have to ask me to go home, you just do what you want’.

“One day we played Manchester City away, we got beat 4-1, and afterwards a lot of players went home without telling him.

“When we came in on a Monday morning he said, ‘why didn’t you tell me you were going home?’

“I said, ‘you told me I didn’t have to ask’, but he said he never said it. He lied about it to be honest.

“He told me to apologise, but I said I’m not apologising for something I haven’t done wrong, then when I came in the next day I found all my stuff in the reserve changing room and he said, ‘you’ll never play for Aston Villa again while I’m manager.’

“I’ve gone from playing for England against France in November at Wembley to suddenly being told I’ll never play for Aston Villa again. It wasn’t an easy time, it was very tough.

“Then in January, Kenny Daglish became the new manager at Liverpool and he asked me to go back there.

“Everything was getting agreed and near sorted, but right at the last minute of the transfer window Aston Villa asked for more money and Liverpool weren’t willing to pay.

“The deal fell through and I always thought if you are not bothered about me as person or a player, you’d want me just to go and play football.

“I believe he (Houllier) had something to do with blocking the deal. I ended up staying the rest of the season not kicking a ball till he left.

“At Liverpool he always picked the French players ahead of me in the reserves team, but I never really spoke to him back then to be honest.”

Fortunately for Warnock, Houllier departed at the end of the season and was replaced by Alex McLeish, who reinstated him to the team. However, it was certainly not the end of his problems in the Midlands.

“The fans didn’t believe McLeish was the right man for the job and the owner said he wasn’t going to put more money into the club because he wanted to sell it so it became a very difficult time for the club in general.

3 years ago, we woke up to graffiti gate, when some Villa fans weren't too happy about the prospect of McLeish. #avfc pic.twitter.com/5Y5v0qF89q

“Stiliyan Petrov got Leukemia, the club was at a very bad position at the time, and with that news as well it just rocked us even more.

“I ended up stepping to be the captain after Petrov left to get his treatment. The chairman used to call me a couple of days before each game, making sure that the players were sorted, got everything they need.

“He told me please keep helping them as much as you can I know you’ve been very influential in the changing room.”

But after narrowly avoiding relegation for a second successive season, Villa changed managers again ahead of the 2012-13 campaign as McLeish was replaced by Paul Lambert.

And for the second time in three seasons, Warnock found himself banished to the reserves.

“I got a phone call while I was on holiday in America saying that I wasn’t part of Lambert’s plans and that I could leave.

“But I didn’t want to leave, I thought I’ll get back and fight as hard as I can to get into the team.

“I came back in pre-season, played every single game and did well, but then we had one more game before the start of the season against Nottingham Forest away and I didn’t have a particularly good game.

“I came in the day after, he pulled me into the office and told me I’m done, I won’t be playing for the first team anymore, I’m joining the reserve team.

“He told me he didn’t have to give me a reason for his decision.”

Sure enough, Warnock did not appear for Villa again, joining Bolton on a three-month loan deal in September before signing for Leeds United on a permanent basis in January 2013. 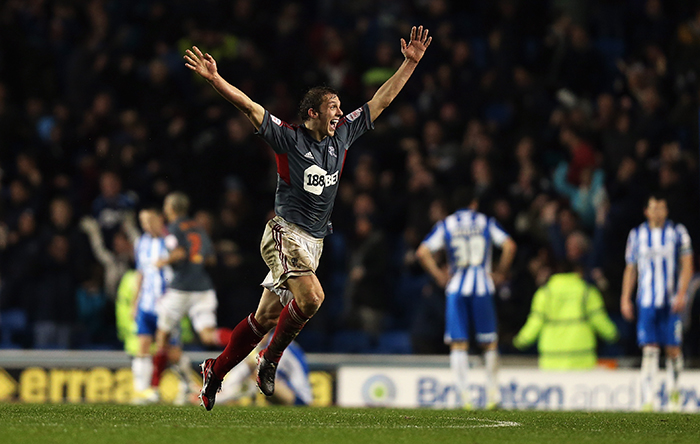 Still only 31 at the time, Warnock also had the option to join West Ham on a short-term basis but believed he could help Leeds to promotion and, even if not, could earn himself a move back to the top flight by playing regularly.

Unfortunately for Warnock, it proved to be the end of his Premier League career as two and a half years at Elland Road was followed by spells at Derby County, Wigan, Burton and finally a loan back to Bradford City, where he had made his first ever senior appearance.

But asked which of the six clubs he represented that are currently in the Championship he would most like to see promoted, Warnock clearly doesn’t hold any grudge against Villa.