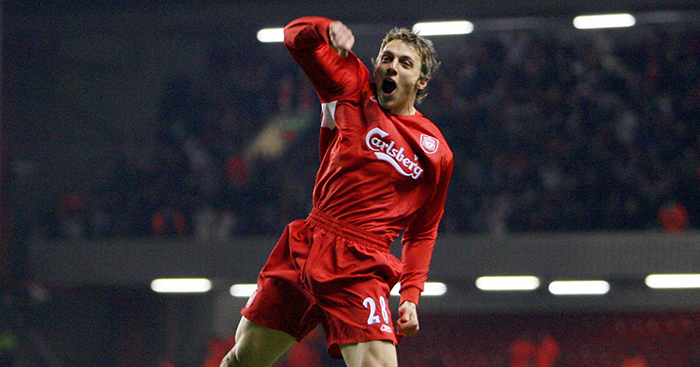 Stephen Warnock still looks back on the day he made his Liverpool debut as one of his proudest moments – and though he left Anfield with a bitter taste in his mouth, he was still gutted at being denied the chance to return.

Warnock called an end to his playing days in May 2017 after a career spanning 16 years, featuring 10 clubs, more than half a century of first-team appearances, two England caps and even a trip to the World Cup as part of Fabio Capello’s squad in 2010.

But despite everything he achieved, the feeling of playing for Liverpool for the first time in 2004 proved difficult to top for the left-back from Ormskirk.

Growing up, Warnock’s father and brother were actually Everton season ticket holders, but there was only ever one club on Merseyside he dreamed of playing for.

“My father and brother used to be Everton fans, they used to have season tickets, and they used to go quite often,” says Warnock.

“Then a friend told my parents he had a Liverpool ticket if I wanted to join him, and I remember just standing on the Kop, the atmosphere, the singing. Everything about it was just amazing.

“Afterwards I went to as many games as I could, whenever the ticket came up and I had the opportunity to go.

“I used to sit at the Kop next to Leon Osman, who used to be a Liverpool fan. Myself and Leon used to play against each other when we were younger as we live in the same area, so we used to go to games together.

“I think I was just addicted to the Kop because I found the atmosphere and everything about it amazing.” 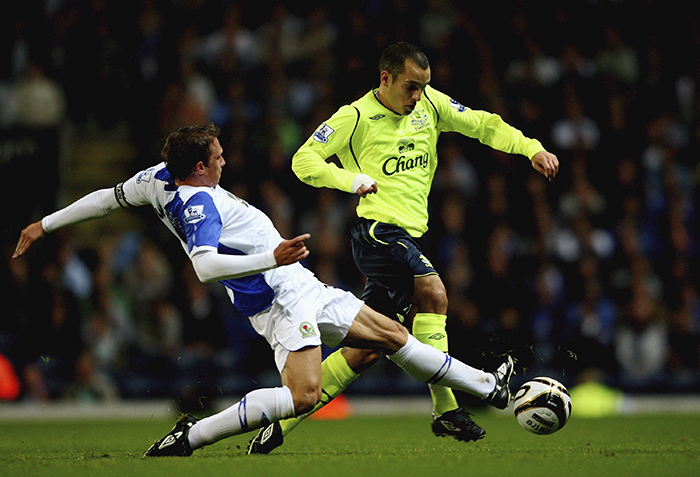 Warnock actually turned down a rival offer from Everton to join Liverpool as a 10-year-old, no doubt much to his father and brother’s dismay.

It turned out to be the right call: he would stay at Anfield for 14 years, remarkably overcoming three broken legs to eventually make his debut for the Reds’ first team against Grazer AK in 2004 after proving himself during loan spells at Bradford and Coventry.

“That moment meant everything because I got bad injuries from the age of 15 till 19, then going out on loan, I knew I wasn’t fit enough to train and play with the first team at Liverpool,” Warnock says.

“Playing my first game just took me back to standing on the Kop for the first time, falling in love with the club and thinking, ‘I hope one day I get to play here, I hope I’ll get to play for Liverpool one day.’

“Once I ran into that pitch, I thought, ‘That’s my dream, I’ve tried my hardest to get here and I’ve done it.’

“It’s probably one of the best days I ever had, one of my proudest moments.”

Warnock went on to make 30 appearances for the Reds that season, including what he feels was the best game of his career in the second leg of their Champions League last-16 tie against Bayer Leverkusen in Germany.

“I’ve been fortunate to play some amazing games, but the most perfect game I felt I ever played was for Liverpool against Leverkusen away in the knockout stages of the Champions League,” he says.

“We won the game 3-1 and I believe everything went very well for me that night against an opponent that was having a great run.” 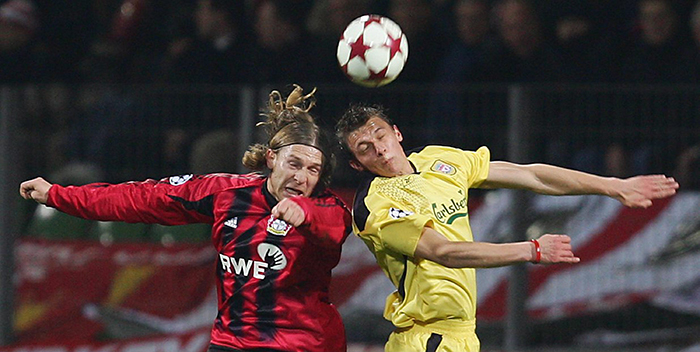 Warnock turned out six times in the competition as Rafa Benitez’s side made it all the way to the final, a far cry from playing in League One the season before. Istanbul, however, was not a highlight, but the night that “spelt the end of my career at Liverpool”.

Listed in the squad a couple of days before the game, Warnock received a phone call a couple of hours later from assistant manager Paco Ayesteran to inform him there had been a mistake and that Josemi had in fact been selected ahead of him.

Later made to fly home to England on a separate plane to those that started the memorable win over AC Milan in order to make room for those players’ families, Warnock was then denied the chance to board the bus with the rest of the players for the trophy parade around Liverpool.

Warnock remained at Anfield for another season and a half, making a further 37 appearances, but when the chance arose to join Mark Hughes’ Blackburn Rovers in January 2007, he did not hesitate to make the move.

“What happened in the Champions League really bugged me from the way I was dropped and the way I was told that I’ll be in the squad to then to get a phone call from the assistant manager telling me it was a mistake,” Warnock says.

“I just thought there was no respect shown to me as a player or as a person from the manager.

“I’ll always be grateful to Rafa for giving me my debut and for my 67 appearances for Liverpool, but I just felt that I had to leave to play more regularly. 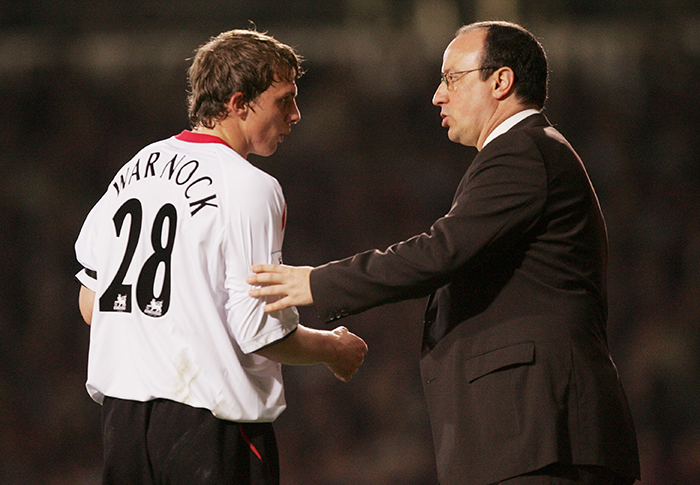 “I knew I was better than what I was showing. I knew from my time at Coventry there were times I’d have a bad game but follow it with six or seven great ones.

“At Liverpool even if I had a good game I knew I probably wasn’t going to start the next one. Then Blackburn came in and they said if my form is good I’ll play every game.

“I got fed up of training every week and not knowing whether I’d be in the squad or not because there was myself, John Arne Riise and Djimi Traoré.

“It was frustrating because I missed so much football breaking my leg back then, and all I wanted to do was play football.

“Leaving Liverpool was tough because it was my club, I grew up supporting them, but I knew it was the right thing to go to Blackburn.

“When I joined Blackburn I had a different feeling, I was the manager’s choice, the player he wanted to sign.” 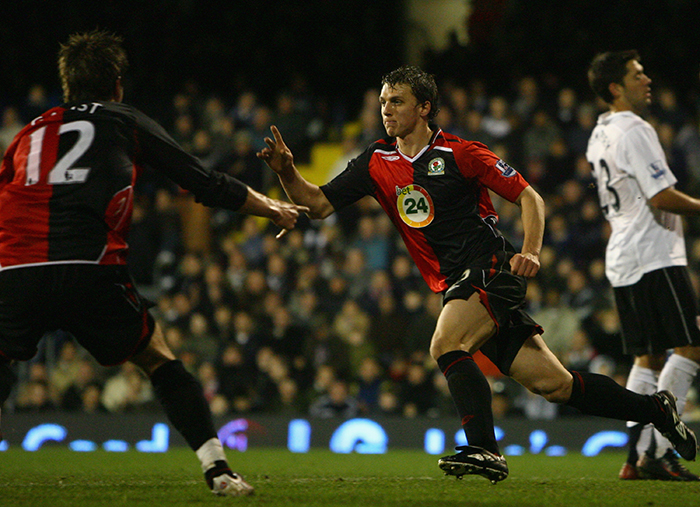 Warnock hit the ground running with Rovers, quickly establishing himself as a starter in a well-oiled lineup alongside the likes of Brad Friedel, Ryan Nelsen, Morten Gamst Pedersen, David Bentley, Benni McCarthy and Roque Santa Cruz.

And in his first full season at Ewood Park, Warnock helped Blackburn finish seventh in the Premier League with some excellent performances which earned him his first England call-up under Capello.

“It just went well from day one,” Warnock says. “My first game was in the FA Cup against Luton Town, I played well in the game and it just gave me more and more confidence.

“I just felt that I belonged at the club, whereas at Liverpool I only felt like a youth team player who was just there.

“My form got better and better. First year I played left-back, the following season as a centre midfielder and afterwards a left midfielder, and I got the chance to join the England squad because of my form at Blackburn.”

Wanted back by Liverpool

Warnock went on to join Aston Villa in 2009, where he was eventually reunited with Gerard Houllier, who he had previously worked under for Liverpool’s reserves.

Unfortunately for Warnock, the Frenchman was not his biggest fan back then and seemingly hadn’t changed his opinion during the intervening years as a falling-out led to the defender being told he would never play for the club again.

And when he was offered a welcome way out of Villa Park by his old club, Warnock believes Houllier may have played a role in the deal collapsing, forcing him to continue kicking his feels in the Midlands.

“Kenny Daglish became the new manager at Liverpool and he asked me to go back to Liverpool and everything was getting agreed and near sorted,” Warnock says. 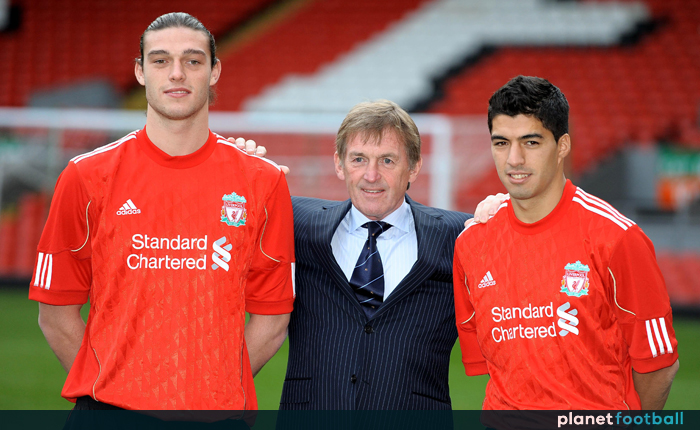 “Right at the last minute of the transfer window, Aston Villa asked for more money and Liverpool weren’t willing to pay.

“The deal fell through and I always thought if you are not bothered about me as person or a player, you’d want me just to go and play football.

“I believe he (Houllier) had something to do with blocking the deal, I ended up staying the rest of the season not kicking a ball till he left.

“At Liverpool he always picked the French players ahead of me in the reserves team, but I never really spoke to him back then to be honest.”

Warnock went on to regain his place in the Villa team following Houllier’s departure and went on to play for five more clubs before hanging up his boots, but he’ll always wonder what might have been had he been allowed to return to Anfield.