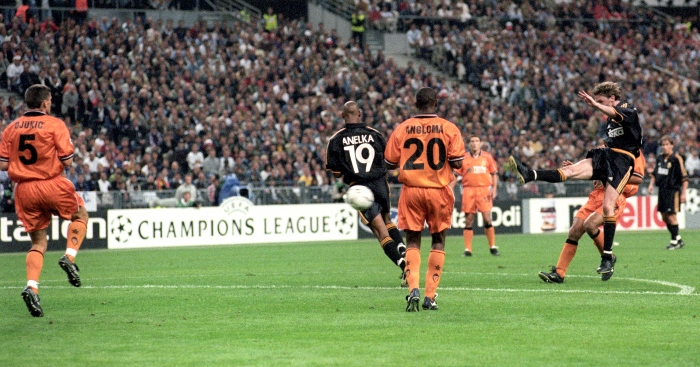 As former Liverpool, Real Madrid and England winger Steve McManaman identifies the best moment of his career, one momentous occasion stands out above the rest.

Last Sunday marked the 20th anniversary of Real Madrid’s 3-0 Champions League final win against Valencia in Paris, with BT Sport analyst McManaman giving us his memories of a personal journey that led to a night when he scored a goal that cemented his legacy as a Los Blancos legend.

While he had some great moments with his hometown club Liverpool, McManaman told us the moment he tasted glory in the biggest game of them all was his finest hour.

“Getting your hands on the Champions League trophy you have seen so often is incredible,” McManaman says. “It is the ultimate achievement for any player and to score a goal in the final was the icing on the cake for me.

“There is always pressure to perform at Real Madrid, but that is pushed up a few levels when it comes to playing for the club in the Champions League, so to win the trophy in my first season there was very special.

“We ended Manchester United’s reign as European champions in the semi-finals and as you can imagine, I got a very friendly reception from the Old Trafford fans!

“Then we had the all-Spanish final against Valencia in Paris and I was fortunate enough to score a goal in the win, which has to be the biggest moment for a professional footballer playing in Europe.

“The goal itself was not the best of my career. That came for Liverpool against Celtic in 1997, when I ran the length of the field to score, but it terms of importance, there is nothing to compare to scoring in a Champions League final.

“When you are part of a team that wins the Champions League for Real Madrid and especially if you score a goal in the final, you will always be remembered by the fans at the club and that is the case when I go back to play in charity games.”

McManaman was heavily criticised by Liverpool fans when he left the club to seal a lucrative switch to Real Madrid in 1999, yet he insists financial reward was not the driving factor behind that move.

“It wasn’t about money, as has often been said, because Liverpool were offering me something very similar to Real Madrid financially, but I wanted the challenge,” says McManaman, who was an Everton fan in his youth.

“People said I was a traitor and I should never have left Liverpool, but playing abroad appealed to me and my big ambition was to play in the Champions League, which is something I hadn’t done up to that point.

“You look at the Real Madrid team I joined and it was amazing. Iker Casillas in goal, Roberto Carlos and Fernando Hierro at the back, Clarence Seedorf in midfield and Raul up front. We had match-winners everywhere.

“At Liverpool, I always felt like I needed to be the one to make something happen to turn a game in our favour, but there were seven players at Real Madrid who could do that and I was just part of the mix.

“It was an incredible team to be a part of and I didn’t feel the expectation was any different than it was at Liverpool, even though Real Madrid are probably the biggest club in the world.

“Real Madrid expect to win everything and if it doesn’t happen, the coach gets fired, but the players just dealt with that pressure. Playing for Liverpool probably helped me because I handled big expectations throughout my career and this was a continuation of that story.

“Liverpool was home for me, but the chance to experience life in Spain and play a different type of football was a wonderful adventure.

“To be fair, Liverpool fans are fantastic to me now as well as I think they appreciate when I gave the club during my time there and overall, I have no regrets about any decision I made in my career.”

Germany’s Bundesliga is back and BT Sport are screening every game until the end of the season.