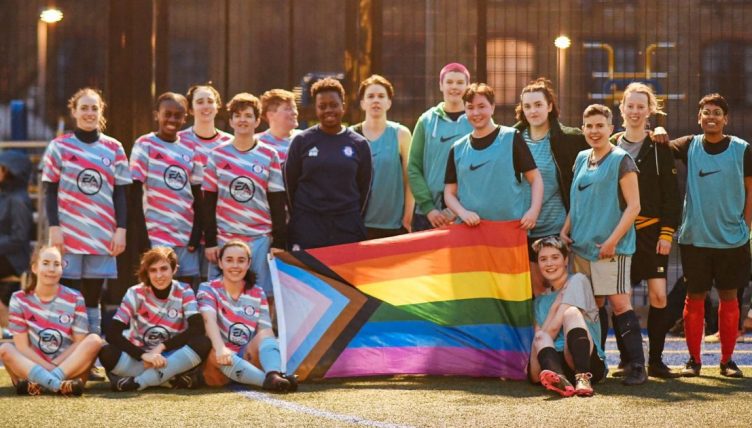 April is here. The clocks have changed. Spring is upon us. Which, as a football fan or player, means one thing: the season’s end is nigh. For Stonewall FC, it has been another strong one.

With two games left to play, their first XI are fourth in the Middlesex County League Premier Division, which sits atop Step 7 of England’s football pyramid.

Come the full-time whistle of the final game, they will reflect. Not just because this campaign has been successful, but because it has been a landmark for their club. Stonewall FC will have completed 30 seasons since its foundation in 1991-92.

Those thirty seasons, like for any non-league club that reaches that milestone, have been a story of challenges and challenging – for trophies, for promotions, for titles.

But with Stonewall FC, there is something more. It is a club with a greater mission, a purpose. As well as for trophies, Stonewall attempts to challenge stereotypes and preconceptions, break down barriers and build hope, deconstruct ignorance and replace it with understanding.

Stonewall FC, when founded in September 1991, was the first all-LGBT+ football club in the UK. Thirty seasons later, it is the highest-ranking openly LGBT+ club in England’s football structure and the most successful LGBT+ club in history, not just in the UK, but anywhere in the world.

That is quite the title. But the road to acquiring it has been rocky.

It began in October 1990, when Mikko Kuronen put an advert in the weekly newspaper Capital Gay. The note invited readers to come for a kickabout with “like-minded men” in Regent’s Park. Interested flourished and 11 months later, they were entering a team in a league for the 1991-92 season.

The internal debate was about whether the team should be openly gay or not. Their concern was natural; prejudice was rife and vicious.

Raph Lennon, a member of the club for two decades, says the team was founded at “the height of the AIDS crisis,” when carriers of the disease were portrayed as dangerous by the press and politicians. Section 28 – an egregiously intolerant piece of legislation that prohibited the “promotion of homosexuality” – had been introduced by Magaret Thatcher’s government three years prior. The World Health Organisation still classified homosexuality as a disease. It was a tough environment in which to be out.

Soon, though, the debate was ended; not by internal consensus, but by an article published in the Daily Mirror. “Queens of the South” was the headline and the words “League outing for gay soccer team” were stamped in bold font below. They had been outed without their consent.

After the article was published, the league Stonewall had joined decided a vote was needed on whether to allow them to play. The five-member committee cast their ballots and, Lennon says, “the vote was three to two to allow us to play in that league.”

In that Daily Mirror article – which Lennon has kept as part of the Stonewall FC archive he’s co-curated at the Bishopsgate Institute in east London – a player from one of the teams Stonewall would face in that 1991-92 season is quoted as saying, “The fact that their players are gay makes no difference. We couldn’t give a damn.”

Though that may have been the case for the quoted individual, not all of Stonewall’s rivals were similarly open-minded.

At the launch event for the Stonewall FC archive, one of the club’s founder members, Aslie Pitter, spoke of a game in which opposition players sang a Buju Banton song about murdering homosexuals in the dressing room before the game and spat at him repeatedly on the pitch. The referee did nothing. It was just one experience among many.

Yet through the hate – and despite a lack of support from the authorities – Stonewall stood firm. Then success started to come. Rather a lot of it.

26 years ago I went to the USA to participate in the 1994 Gay Games in NYC in football ⚽️ for London Stonewall FC. Sadly lost on penalties in the final but so many happy memories. Fell in love with NYC. pic.twitter.com/croE4Ioirs

In 1995, Stonewall won their first International Gay and Lesbian Football Association World Cup in Los Angeles. They repeated the feat in 2000 and 2001 and in 2002 won the club’s first Gay Games football title in Sydney.

By 2014, when Stonewall won their fourth Gay Games title in Akron, Ohio – to add to nine IGLFA World Cups and six European crowns – they became the most successful LGBT+ football club in the world.

For Lennon, those tours and international achievements are key to the club’s essence. He says the trips foster the sense of camaraderie and mutual support that is fundamental to Stonewall’s modus operandi. Lennon refers to the club as a “newfound family”.

His favourite memories of playing for Stonewall have also been forged in the fire of international competition.

The first treasured recollection he cites is the 2009 IGLFA World Cup in Washington, DC, when his brother – who is straight, married, 10 years younger and was then living in Montreal – joined up with Stonewall for the tournament.

“I would never have been able to play in another club with him,” Lennon says. “[Another club] would have had a set of players and that’s it. Here, it was like, ‘Well, it’s your brother. Of course he can play for us.’

“That’s one of the biggest achievements of the club for me. It’s that capacity of being able to accept anybody as long as they’re respectful and adhere to our ethos, to our values.”

The second he brings up is from that Gay Games win in 2014. In the semi-final, Stonewall faced the Argentinian entrants, Los Dogos, in a game streamed live across the world. “The game had been so difficult and ill-tempered,” Lennon smiles.

It was tight, the scores level. As the seconds ticked away, he placed a free-kick five yards outside the area, struck it, and found the corner of the goal. “The whole thing goes into pandemonium,” he says, his eyes glinting. “There’s Argentinian guys chasing other players around the pitch. The police arrived to stop the game. That doesn’t exist anywhere else.”

The successes have also brought continued media attention, which has been a double-edged sword.

The negatives were most pronounced in the early years. After one sensationalist tabloid piece, Lennon says, the partner of a player, who was not out at work, lost his job simply for being gay.

And even ostensibly positive articles were soaked in latent homophobia. Lennon produces another published in the aftermath of their 1995 IGLFA World Cup triumph. “England win the World Cup,” says the headline. The sub-heading: ‘But it’s only the gay one.”

On the other side of that coin is the opportunity that attention brings.

In the mid-2000s, when Stonewall were still establishing themselves as a non-league outfit, costs rose and the club was plunged into financial strife. It almost led to Stonewall winding up. But a change of leadership brought it back from the brink and, in 2007, they were able to secure major sponsorship from Barclays.

Now, Stonewall’s kits are stamped with the EA Sports logo and supplied by Adidas. They are available to buy in the way a professional club’s might be.

When you remember the #unity kit is now available in #FIFA22  💃 🕺

Show your support and rep the kit in #FUT

Fancy your own shirt? Hit the link to grab your very own Unity jersey 👇 https://t.co/uMeYgyp3bn pic.twitter.com/W2pqKo80Ij

The interest of those multi-national brands comes about because of the success, but also, as Lennon says, because Stonewall FC is “more than just a football club.”

They represent an ideal, a sense of belonging, a step in the right direction. “The mission now,” Lennon continues, “is creating a safe space for anybody who wants to play football.”

There are several Stonewall players who identify as straight – but are of course firm allies of the cause – and, more significantly, Stonewall has taken steps over the past decade to represent the L, T and +, rather than just the G and B, as was once the case.

Lennon shows me an information pamphlet from the early 2000s, when he joined the club after moving to London from his childhood home in Brittany. The top line reads: “If you like football and you’re into men – you’ll love Stonewall Football Club!”

Lennon says: “You can’t simply be a successful football club for gay males – and usually white, gay, middle class, cis men. It’s just not correct. We’ve had to evolve. And we have, [by] looking at what we were doing and being quite critical about who we were.”

As well as the first and second XIs, they now run 11- and five-a-side teams for women, non-binary and trans people. With no FA leagues accommodating such sides, they play in the Unity League, a London-based competition entirely made up of LGBT+ clubs. Stonewall are now one of several in the capital.

Happy #TDOV to all our trans & non-binary players & supporters. Today & everyday, we’ll continue to proudly be a space for all.

Signs of progress abound, even if that progress might not always be as quick as one would hope.

Certainly, Lennon says, overt bigotry has become less frequent, less intense. In his early years, it was very much still there: “At the beginning, they started shouting homophobic things, et cetera. But then they realize when they’re 3-0 down that, actually, you can’t do that.

“I always consider it as educating a group of 15 men at a time every Saturday. If you are to change things, you need a catalyst, you need someone to lead that change.”

Stonewall and its members are among those someones, among the pioneers. Their efforts have been recognised in recent years, too.

Alex Baker, the club’s chairperson, now sits on the FA Council, and Stonewall are an integral part of the FA’s Rainbow Laces campaign.

In 2018, linked to Rainbow Laces, they took part in the first non-league league match to be played at Wembley Stadium, running out under the iconic arch as it was lit up in rainbow colours.

“It was just surreal,” Lennon says. “A club, 26 years after being created, playing on the Wembley pitch. Not because we hired it, but for our achievements.”