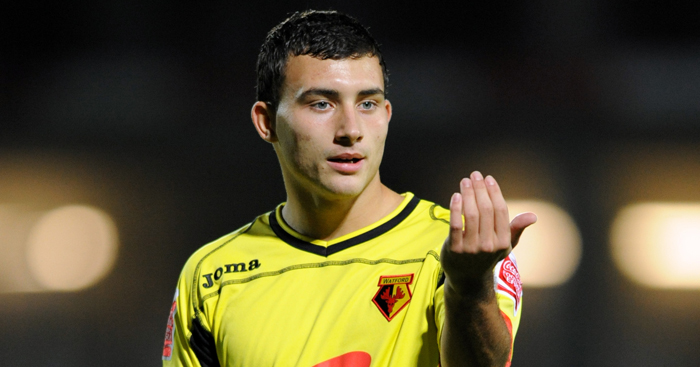 Not many British footballers are brave enough to play abroad, let alone in places like Romania and Bulgaria, but Ross Jenkins clearly isn’t afraid to head into the unknown.

Jenkins came through the ranks at Watford and made 95 appearances for his hometown club between 2008 and 2012, playing for Malky Mackay and Brendan Rodgers, before the Pozzo takeover put paid to his chances of further games.

He made a handful of appearances on loan at Plymouth Argyle and Barnet while still on the Hornets’ books, but it was not until the 2015-16 season that he started playing regularly again when he joined Crawley Town in League Two.

However, after just four months and 14 appearances he decided to swap home comforts and a short commute for life in the Romanian top flight with Poli Timisoara.

And as if that wasn’t surprising enough, after returning home following a nine-game spell in one southeastern European country, he was offered the chance of another at the start of 2017 when Bulgarian relegation strugglers FC Pirin came calling.

Good experience in @Liga1_Romania ,looking forward to what comes next 👍🏼⚽️ pic.twitter.com/OixjcuRMrH

Pirin have had little to shout about in their history other than being the club where Dimitar Berbatov started his youth career and finishing as runners-up in the Bulgarian Cup on four occasions, but it was a move Jenkins did not hesitate to make.

“Before I went out there I was in Vancouver Whitecaps in Cardiff doing their pre-season,” he says, “but there wasn’t going to be anything there for me so I spoke with an old friend of mine who used to work as a scout at Watford.

“He was a friend of the new manager at Pirin, who was looking for a holding midfielder. I’d lost a few weeks with Vancouver, so I didn’t want to waste more time looking for another club, so he put me in touch with him.

“He liked my profile, liked where I’d been and liked that I played holding midfielder so arranged for me to go out there, have a chat with him and look around. It was a good platform to play in, in their top division, so it was quite appealing at the time.”

Needless to say, Jenkins knew very little about the area itself and the intricacies of the club.

The 26-year-old reckons he was pretty lucky to make it to Blagoevgrad at all on the long route from the airport, but a meeting with new manager Milen Radukanov convinced him to make the move.

“It was heavy snow when it go there, I was thinking ‘bloody hell’. It took us two hours to get there, the roads were really bad – there were no motorways – and I was thinking ‘what have I come to?’.

“But then I got to the stadium and met the manager. He’s a really nice guy, a top manager, one of the best I have worked with. He knows the game inside out, I believe he will go on to be a big manager somewhere.

“His coaching techniques and style suited me down to the ground, so I played some of my best football out there. The stadium only had one side to it, it wasn’t an English standard ground, but the quality of football was very high.”

Jenkins arrived just after Radukanov, helping turn the team from relegation fodder to Europa League hopefuls within a matter on months. From the beginning of February until the end of March, Orletata (The Eaglets) won six and lost just two as they surged up the table.

“I am not too sure about how the old manager worked, but from what the players said, it was a bit of a shambles,” Jenkins says. “He didn’t really know or care about what he was doing.

“The new coach, Milen, had his own philosophy, he knew how he wanted the team to play, and he knew which players he needed to make the team work.”

For Jenkins, it helped him realise his style as a player is better suited to the continent rather than the lower leagues of English football.

“He (Radukanov) needed a defensive midfielder and that’s why we got on so well, as I knew the type of role he needed me to do,” Jenkins says.

“It worked very well. He needed someone to sit there, control the game, make sure we were defensively sound, pass the ball, keep the team ticking, give energy, make tackles, set the tempo and be the link in the defence to the strikers.

“Once we had that down to a tee, we clicked, stopped conceding goals and only lost two of the games I played.

“We went from second from bottom to fighting for the play-off for the Europa League as he got the team working the way it should and it showed by performances.

“I just think the style of play and how I want to play the game. The risks I want to take in front of goal, get the ball off the keeper and back four is maybe too risky for League One, but they appreciate it a lot more abroad.”

Life off the pitch

As with with moves abroad, things away from the pitch were not straightforward as Jenkins tried to penetrate the Cyrillic alphabet with little joy.

“The hardest thing was the language barrier,” he says. “In Romania there were a lot more English speaking players and people around the city.

“The language is quite hard to speak, it was easier for me to understand it than to speak it. In training I would understand what the coach and players were saying, but I didn’t know how to communicate back.”

Another good day at the office ✅ pic.twitter.com/qRpmfGuRhU

Nevertheless, Jenkins enjoyed his time in what he describes as “quite a social place”, regularly having dinner with the club’s other foreign imports, but it wasn’t just communication that was an issue.

“When I went there I wasn’t aware that most clubs in the league, including Pirin, do have late payments,” he says.

“I didn’t realise until one day when I turned up and the players were all a bit moody and said they hadn’t be paid. I dug a bit deeper and the money was there, but it was just getting it to the players that was the issue.

I believe if we’d been paid on time ahead of our last two games of the season we would have made the Europa League.”

Jenkins was offered the chance to stay at Pirin for another year, but the problems with wage payments convinced him to head home to England to consider his options.

He eventually added another country to his list, joining Viking in Norway, before moving even closer to home in February 2018 when he was signed by Hamilton Academical.

For a man who’s played in Bulgaria and Romania, it must feel like home.