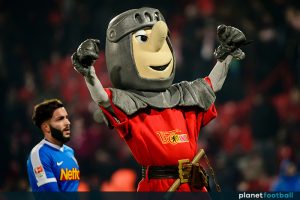 Berlin’s mascot ‘Ritter Keule’ celebrates the victory after the 2nd Bundesliga soccer match between 1. FC Union Berlin and VfL Bochum at the Alte Foersterei stadium in Berlin, Germany, 27 January 2017. Berlin won 2:1. (EMBARGO CONDITIONS – ATTENTION: Due to the accreditation guidlines, the DFL only permits the publication and utilisation of up to 15 pictures per match on the internet and in online media during the match.) Photo: Britta Pedersen/dpa-Zentralbild/dpa