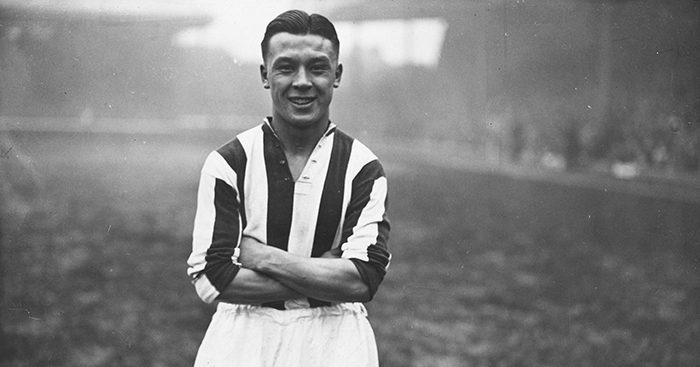 Frank Soo captained Stoke City and is the only player of Asian descent to ever represent England – yet you have probably never heard of him.

Though a household name in his time, Soo has been largely forgotten by English football.

A wonderfully gifted half-back, he established himself in a fantastically entertaining Stoke City side in the 1930s, going on to captain the Potters and then represent England, but his story is remarkably unknown.

Born in Derbyshire to a Chinese father and English mother, one might think that being the first and only person from an Asian background to represent England would enshrine his name in English football folklore.

Yet, for a myriad of reasons, Frank’s name isn’t as well-remembered today as many of his contemporaries – the likes of Joe Mercer, Tommy Lawton and his Stoke City team-mate Stanley Matthews.

Susan Gardiner, author of The Wanderer, an illuminating biography of Soo’s life, says all accounts of his playing ability make him one of the greats of his day.

“Anyone reading match reports from the time or interviews with supporters who watched him play can see how highly regarded he was for the elegance and skill of his play,” she says.

“In his time, he was also regarded as one of the best by his fellow players, like Joe Mercer and Stan Mortensen and it wasn’t uncommon for Stoke City fans to say that Frank Soo was ‘better than Matthews’.”

After spending most of his childhood in Liverpool and a few games for local side Prescot Cables, Soo was scouted by Stoke City and joined Tom Mather’s exciting young Potters side in 1933.

Soo broke into the first team not long after Matthews, and Stoke fostered a reputation for intelligent, skillful football that made them one of the most celebrated sides in the country.

In the sides of Mather and his replacement Bob McGrory, Soo was a star in the Potteries and would later captain the men in Red and White.

It is difficult to establish, therefore, if Soo’s race was a tremendously heavy burden to him. While his heritage was regularly commented on, particularly in the early years of his career, there’s little evidence of him being subjected to the worst kind of prejudice.

“He appears to have brushed it off,” Gardiner says. “He was always called a ‘Chinaman’ or ‘the Chinese player’, but I think his skills and personal charm silenced many people who might have been abusive.

“However, I suspect that racist attitudes were so common at that time that it was just regarded as normal. He may well have been subjected to more abuse than we will ever know about.”

Match reports and football articles from the time gush about Soo’s ability. Though he only scored nineteen goals in his career, Soo’s “quick but calculated mastery of the ball” – as one newspaper put it – set him apart from other players.

He represented England on nine occasions, but the nagging question remains – would he have had more had he been white? Soo himself suggested in 1975 that his relatively few appearances for the national team came down to his “oriental blood”.

Stoke City's Frank Soo is one of the first ethnic minority players in England’s Football League, here he is in 1933. pic.twitter.com/MztqauvzzI

Robbed of his best days

Like so many of the great players of his day, Soo’s footballing pomp was interrupted by the Second World War.

In 1939, he was 25, and were it not for the outbreak of war it is easy to imagine that he – and Stoke – could have won league titles and FA Cups.

However, the reality for Frank was joining the RAF (whose side he captained) and making several guest appearances in wartime matches, for the likes of Everton, Newcastle, Chelsea and Millwall.

Though robbed of the best years of his career, Soo continued playing until 1950, with spells at Leicester, Luton and Chelmsford City.

But he was more than simply a good footballer in his day. He was also one of the game’s great pioneers.

“His commitment to training, fitness and a healthy lifestyle was ahead of his time – only Stan Matthews was similar in that respect,” Gardiner says.

“He also stood up for himself and fellow players, speaking out for players’ rights and against the maximum wage many years before it was finally abolished, something for which he has never been given any credit for.”

This pioneering spirit continued after he hung up his boots and pursued a coaching career.

He spent over 30 years coaching in Scandinavia, bringing ideas about fitness and training with him and revolutionising the Swedish game long before the likes of Bob Houghton and Roy Hodgson. This period saw Soo win Djugardens IF their first ever Allsvenskan championship.

Frank Soo lining up with England before a Wartime international vs France. pic.twitter.com/tYqwEWcEvQ

Soo’s career naturally draws parallels with the legendary Matthews. They were both relentlessly dedicated sportsmen that merged their work ethic with an outstanding natural talent.

On the pitch, they were tricky wide players, capable of devastatingly precise passing. Off it, they were ruthlessly focused on health and nutrition in an era where heavy drinking and heavy smoking was the norm among professional footballers.

They both fell victim of Bob McGrory’s distrust of ‘star players’ and left Stoke in more acrimonious circumstances then their performances deserved.

For obvious reasons, Matthews became one of the most revered English footballers of all time, yet Soo faded into obscurity. Outside of Stoke-on-Trent, the name Frank Soo is likely to draw blank expressions from even the most clued-up football supporters.

This may be down to the fact that Soo is mentioned very little by Matthews himself, particularly in The Wizard of the Dribble’s autobiographies. Despite having played with Soo for so much of his career, Matthews’ reference to his former team-mate are rather sparse in his memoirs.

It is this peculiar, literal, omission from the history books, that, according to Gardiner, explain why the memory of him has faded so severely.

“Because he does not feature in the recollections of his peers, he doesn’t come up as an important figure when people research football history now, although he was a household name in his time.

“It’s an attitude that’s difficult to understand and, although I don’t think the reasons behind it are overtly racist, I have to say that there does seem to be a strange attitude to him, as something ‘different’ or ‘other’ which affected attitudes to him in the past and still remains, to an extent, today.”

The Wanderer is a lovingly crafted and well-researched biography, but so much of Soo’s life and career will remain a mystery to us.

He played in an era where there was barely film, let alone the abundance of match highlights and YouTube reels that can be used to demonstrate the talents of today’s great players.

However, what remains clear is that Soo was so much more than the great footballer he undoubtedly was.

He was England’s first non-European player and the first player of East Asian heritage to play professional football at the highest level – and therefore ought to be an inspiration for young Asian footballers in Britain.

His talents as a coach, charisma, wartime service, dedication to fitness and his fight for players’ rights should all be thrown into the mix when appreciating Soo as a giant of the game.

READ NEXT: The story of the blogger who met Pep and got work with Bielsa & Sampaoli