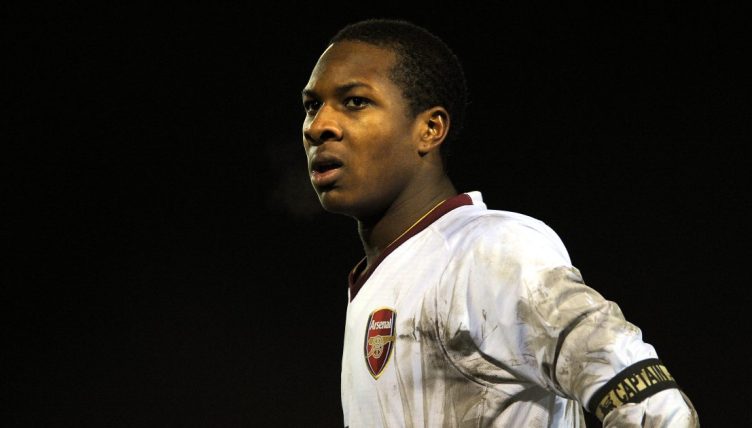 Gavin Hoyte may have only made one Premier League appearance for Arsenal, but he still thinks of that solitary game as one of the highlights of his career.

“I remember just going out there, seeing Robinho and thinking about what he’d done to other defenders, hoping he wouldn’t do that to me. But I was full of confidence and I was ready.”

As a young right-back set to make his league debut, there are probably opponents you would choose before Manchester City and their new super signing from Real Madrid at the Etihad Stadium.

But that’s exactly what Gavin Hoyte got in 2008 when he was drafted into Arsenal’s backline the day after William Gallas had been stripped of the club captaincy for criticising team-mates amid a poor run of only one win in four games.

“When the chance came there were a few injuries and that was it, I was in,” Hoyte says.

“I remember the training session before the game, one of the coaches said to Armand Traore, Jack Wilshere and me, ‘One of you is going to make your debut, who do you think it is?’

“I don’t think anyone thought too much of it, but then we were doing shape work and I was in there, and I just had to be ready.” 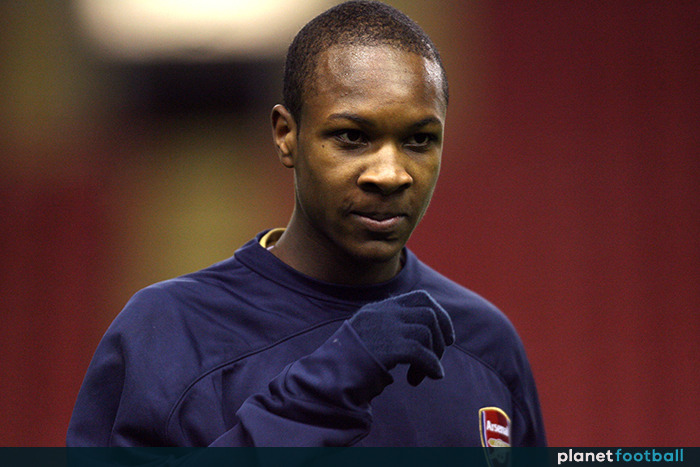 It was the culmination of almost a decade’s work for Hoyte, who had joined the club aged nine.

Like most inside a club’s academy, at the time Hoyte believed stepping up to the first team was a natural step, particularly with his brother Justin having made 68 appearances for the Gunners before being sold to Middlesbrough that summer.

“When you’re there you always think you’re going to make it – I was pretty confident,” he says. “I had my older brother there as well, so that helped a lot, seeing how he progressed.

“That was a big thing for me, seeing him play every week, watching him thinking, ‘I want to try and get to where he is.'”

Road to the first team

Hoyte Jr. had captained Arsenal’s Under-18 side during his path towards the first team and had sat on the bench as an unused substitute for several games before making his debut in a 6-0 League Cup win over Sheffield United a couple of months before that Manchester City game.

He started in the next two rounds of the League Cup too, against Wigan and Burnley, and his Arsenal career only seemed to be heading in one direction.

“Just to play at the Emirates was massive, coming out to a big crowd,” he says of that game against Sheffield United.

“There were a lot of young boys in the team so that helped me with confidence and eased it. I think I had three games in the cup, so it helped a lot.

“But there were a lot of players in front of me, so I didn’t think about playing (in the Premier League). It was always in the back of my mind, but I wasn’t thinking I was going to play immediately.”

Yet just 11 days after the second of those League Cup appearances, Hoyte was handed his Premier League debut. And though he was withdrawn after an hour of a 3-0 defeat, he had no idea that would prove to be both the start and end of his top-flight career. 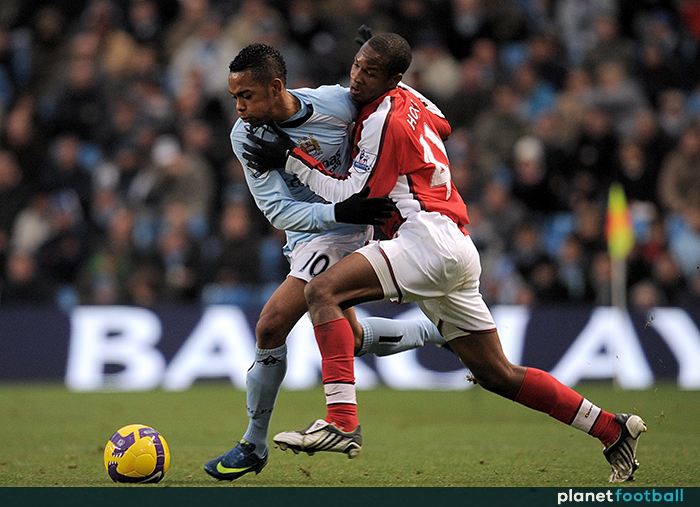 “Seeing my brother do it, that helped a lot,” he says. “He didn’t say too much, as he didn’t want to make me too nervous. He just said to enjoy it and everyone would help me out.

“It was one of them things, I was still young so I didn’t take too much in. I took it a little bit for granted, but looking back it at it now, I shouldn’t have.”

Wenger and his staff didn’t give much feedback to Hoyte after the game, but he was awarded a new long-term contract soon after before being sent out on loan to Championship side Watford in the winter transfer window.

It certainly didn’t seem at that time as though his Gunners career was already over, but having made his fourth appearance for the club in the League Cup quarter-final defeat to Burnley at the start of December, he would never play for them again.

“They didn’t say anything (after the Man City defeat) as we were losing a few games at that point. It was when Gallas was stripped of the captaincy, so there was a lot of stuff going on off the pitch, so I think that overtook the game.

“Most of the coaches just told me ‘well done’ and to keep doing what I was doing, and that’s when I went on loan to Watford straight after.”

Life away from Arsenal

“I’d always lived at home with my mum and dad, so I got a chance to live alone. Living on your own, cooking the right things and just doing everything for yourself, it was a good life experience.

“At Arsenal you get everything: food; the gym is top quality; the training gear; even the pitch as well. The Championship was a lot different to how it is now the quality is a lot higher now than it was back then.

“Also, in the reserves I was playing every week, but when I went to Watford I played, then I was out of the team, so you get that experience of coming out of the team and how you deal with it.”

Hoyte would spend most of the following season on loan at League One Brighton before dropping down another division for further loan spells with Lincoln City and AFC Wimbledon over the next two years. 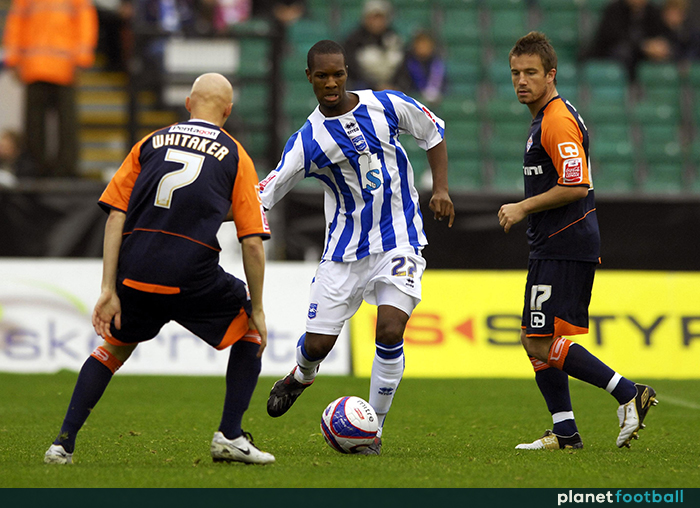 By then he realised there was little hope of him ever returning to the Arsenal first team, and he eventually left for Dagenham and Redbridge, three and a half years after making his solitary Premier League appearance for the Gunners.

“From when I came back on loan (from Watford), I didn’t train with the first team as much, so from then I realised I’d had my chance. Before that I was training with them nearly every day.

“When I went to Lincoln that was an eye-opener for me as I’d always played higher, I’d never really looked at the lower leagues, so I knew I needed to buck up my ideas here, otherwise I would end up with nothing. So there was where I realised I had to do my best.

“I think it was Dagenham and Barnet who wanted me so I spoke to my agent, he told me about John Still and how he works, so I thought it was for me. And the goalkeeper coach at Arsenal, Tony Roberts, he was at Dagenham before that and told me I’d enjoy it, so that helped make my decision.”

Hoyte, who now plays in the National League South with Maidstone United, enjoyed a largely successful career in the lower leagues with Dagenham, Gillingham and Barnet, and also has three caps for Trinidad and Tobago to his name.

And just as his Premier League debut came against star-studded opposition, his international bow came against Lionel Messi’s Argentina as part of their preparations for the 2014 World Cup.

“My brother was playing for them at the time and the manager asked if I’d be interested in going, so I said yes.

“He gave me a call, I spoke to him, he said they had some good games coming up and that he was going to pick me for the friendlies against Argentina and Iran, so I didn’t need much enticing after that.

“I came on for 20 minutes, and Maxi Rodriguez and Marcos Rojo were on my side. Messi was on the pitch at the time too, and even though it was only 20 minutes, to watch people like that was incredible. It was a great experience.”

Still, even with his international experience, that hour against Manchester City still stands out for Hoyte. He may never have played again in the Premier League, but it was the result of years of work and sacrifice, and an achievement few others manage.

“It’s one of the best memories, I don’t think many people can say they’ve done that, even if it is for one game. You can never take that away.

“Starting from aged nine, when everyone’s aim is to play in the Premier League or just play in the first team, I did that, so it’s definitely up there.”

One-Game Wonder: The story of Rhys Weston’s one PL game for Arsenal