Brian McClair spent 11 years as a player and even longer as a coach at Manchester United, but he is not the only member of his family to have played at Old Trafford.

The striker’s son Liam also spent time on United’s books under Sir Alex Ferguson, playing alongside some future stars for the club’s academy – but it is as a musician rather than a footballer that he ‘played’ at the Theatre of Dreams.

After joining United as a teenager, playing alongside the likes of Matty James and Federico Macheda, McClair Jnr spent much of his time at the club injured, problems which would eventually put paid to his chances of becoming a professional.

“I was 15 and had a few trial matches and signed a contract at the academy – it wasn’t a schoolboy one, so I continued to go to school at the same time,” he says.

“I was involved with the Under-18s who Paul McGuinness was coaching, but predominantly I was injured.

“I ripped a quad muscle just as I signed for them so I was out for about eight months with the rehab at Carrington, then I came back for a month or two, went to the Milk Cup, where we finished runners-up to Sao Paulo, I think, in 2007. 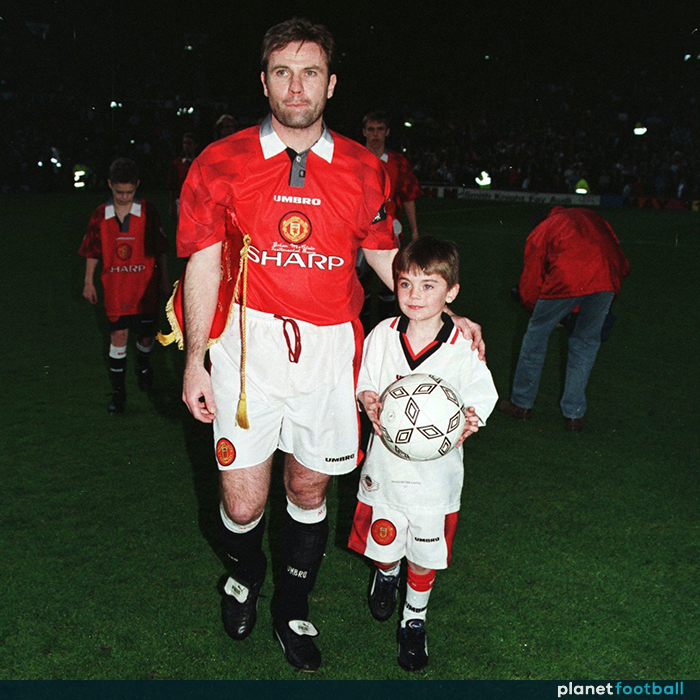 “Then I had keyhole surgery on my ankle, which was down to a previous injury, so I was out for another eight months. So I wasn’t really in the team that much. I only ended up playing a handful of matches.

“I was never selected enough to feel like I could play higher. I didn’t really establish myself enough, and by the time I came back from my second injury, I was training with players a few years below – the likes of Jesse Lingard and Ravel Morrison.

“I felt like the way I play changed due to the injuries and I wasn’t the same type of player, so I decided to stop playing after that.”

The injuries were not career-ending. McClair could have tried to seek professional employment at another club, but instead he decided his life lay outside of football and headed to university, unable to predict where life would take him.

“I could have played football, I can still play, it wasn’t a career-ending thing,” he says. “I was pretty sure I wasn’t going to get offered a professional contract at United, just due to overhearing comments and as I hadn’t played that much so it was difficult to assess whether I was worthy of giving that contract to.

“If I had wanted to continue football, I could have trialled at different clubs, but I’d decided I didn’t want to do that at the time.”

Music was originally a sideline for McClair, who had taken it up at school for enjoyment, rather than as a serious vocation. But after studying at university, McClair decided he could make it as a professional musician thanks to his talents on piano and guitar.

“I always wanted to play football as a career, and music was something I did on the side. I played piano and trumpet as a kid, took up guitar as a teenager and did my first gig at school when I was about 17, I just did one song – I did the same the following year.

“Then I went to university to study sport in Liverpool and it wasn’t until my final year I pursued gigging and performing to make something more of what I was doing.

“I got some success as BBC Introducing in Merseyside played a few of my songs and had me on their show quite early on and that encouraged me, so I moved back to Manchester, kept gigging from then and started doing music full-time in September 2015.”

McClair’s a singer-songwriter, who plays acoustic guitar and piano, describing his music as being pop-inspired. He has been able to hold his own in the industry and has had a number of his songs played at United games in recent times, becoming the second of the McClair family to be played at Old Trafford.

“It was pretty cool, it’s happened a few times,” he says. “It’s quite nice that every time I have a new song that’s been released they’ve always been supportive, which is part of their family ethos, so I’ve never been forgotten.

“I was there when my song was played first, but I don’t think I’ve ever had one played at a win, so it might be a curse.”

Having his music appreciated by United fans is one of few connections McClair still has with the football world, as he rarely mixes with those in a previous life, having spent most of his time in the shadows at Carrington.

“I don’t really see many of the footballers I played with,” he says, “as it was such a long time ago and I didn’t really keep in touch with them while I was there as I didn’t really feel part of the team due to the injuries.

“I’ve seen a few coaches since I left and the odd person at the football if I’ve been there, and everyone’s been nice and interested in what I’ve been up to, but I don’t keep in touch with all that many, if I’m being honest.”

McClair has no reason to consider any sliding doors moments when it comes what could have been in football, instead looking ahead knowing he can achieve even bigger things in the industry that came calling, meaning his surname could soon be synonymous with both football and music in Manchester.

“I predominantly do cover gigs, weddings, functions and private events, which covers the bills,” he says.

“I also write my own music, play original gigs here and there, I do support gigs, so it’s a bit of the mix and there’s a lot you can do in the industry. I am trying to set up a label and trying to release some stuff myself later on this year.

“I think to be sustainable as an original musician would be great; if I could live off people paying for my music or have my music used in a way that would fund my lifestyle would be brilliant, but it’s about learning.

“When I got into music I didn’t have much knowledge of the industry, so I am trying to educate myself. I’ve been doing full-time music for almost three years now and it’s been really good fun.”

For more information about Liam, go to his website: liammcclair.com