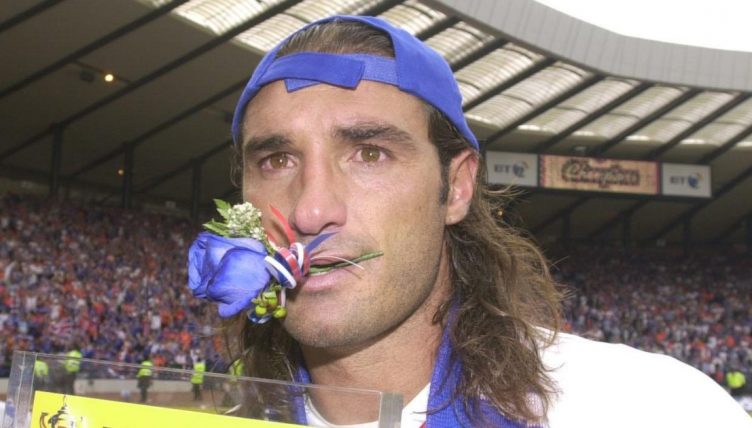 Such a transfer is pretty hard to imagine nowadays, but when Lorenzo Amoruso left Fiorentina for Rangers in 1997, he did so purely for sporting reasons.

The Scottish Premiership is hardly seen as the most glamorous of leagues to play in these days, but Rangers were well capable of attracting top talent in the 90s and did just that when fighting off competition from Manchester United – yes, really – to sign Amoruso.

He was Fiorentina’s captain at the time and had just helped them reach the semi-finals of the Cup Winners’ Cup, but Rangers could offer Champions League football.

The 1997-98 season was the first in which runners-up were allowed to compete in UEFA’s premier competition, but it was not until 1999-2000 until the top leagues were allowed three or four representatives. With big crowds, competitive wages and the chance to play on the biggest stage, Rangers were a huge draw.

That said, it was still a surprise when Amoruso moved to Glasgow in May 1997, with Serie A the strongest league in Europe at that time.

“It was particularly unusual for young Italian players,” Amoruso says. “There were already some Italian players abroad, but almost all of them were at the end of their careers.

“My experience was a little bit different as I left when I was 26. Fiorentina needed money and they sold me to Rangers for almost 15 milliard of old Lire (£4million) which was a lot of money for a defender. 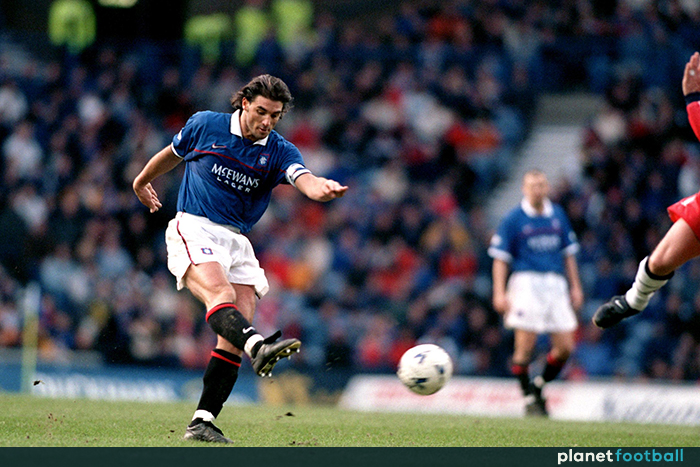 “I took my time (to decide on the move). I went to Glasgow to have a look around and talk with the CEO and the manager, and then I had no doubt.

“Rangers was – and still is – a very important club, the atmosphere was wonderful, and the team had some very strong players.

“Also, at that time it was not the Champions League you see today, just the winning team of their respective championships played in it and so it was not so easy to participate. It was an opportunity I couldn’t miss.

“I had the possibility to face the strongest teams and players of that time. It was an amazing experience”.

Rangers also signed Marco Negri and a young Gennaro Gattuso that summer in search of a 10th consecutive title, but even had it not been for the arrival of two more Italians, Amoruso never doubted he would adapt to a new country and league at a time when such transfers were still relatively rare.

“I had no problem because I was convinced that it was up to me to adapt my life to the new experience,” he says. “I think it’s too easy for a football player who earns so much to say, ‘It was difficult for me to adapt, so this is the reason why I failed.’

“When you go abroad to play, you cannot expect that everybody changes for you, it’s up to you to adapt. But I have to say that in some ways I was lucky because when I arrived in Glasgow I was injured so I had the time to live Scottish life and understand how the club and the team worked.

“The daily life in Glasgow was enjoyable and – as I said before – Rangers is a big club, and in the big clubs you have everything you need and only have to think about football”.

Rangers failed in their quest to make it 10 titles in a row, but Dick Advocaat replaced Walter Smith in the dugout at the end of the season and went on to claim the domestic treble in 1998-99 before the Light Blues won the title by an incredible 21 points in 1999-2000, when they also won the Scottish Cup and enjoyed a memorable Champions League campaign. 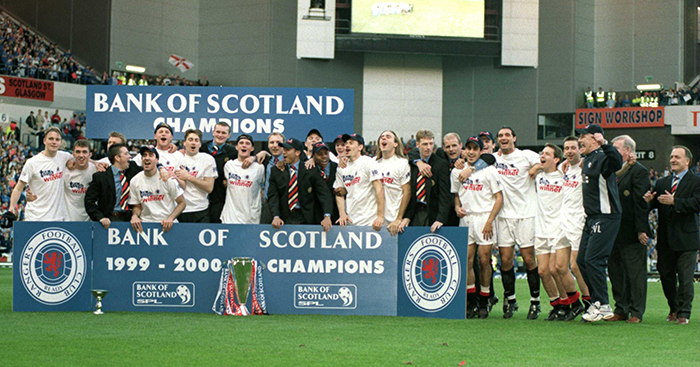 However, it’s the relationships Amoruso built with fans and team-mates that he remembers most fondly all these years later.

“They’re so many (great memories) that it’s really difficult to pick out one,” he says. “Sometimes you remember your victories, but I remember most the atmosphere, the fans’ passion.

“I always says that we are very lucky as footballers because we had a job which was our childhood dream. That’s why also signing some autographs for the little fans was something wonderful. The idea that I could give some happiness to them with just a signature was unbelievable for me.

“So, that’s what I remember most, even if obviously I also remember the trophies we won.

“Also, the atmosphere we had in the dressing room. We still have a WhatsApp chat for the team-mates, we are still in contact, we try to meet as soon as we can.

Amoruso was made captain by Advocaat, becoming the first ever Catholic player to skipper Rangers, a Protestant club, and though both he and the team suffered some ups and downs during his six years in Glasgow, he remains grateful for the support of the fans.

“The most important difference (between Italy and Scotland) is that in difficult moments for the team the fans always support you, even if things are not going well and you did not perform as they wish.

“They also become angry in the bad period, but they always respect the players and the job they did. I loved playing in Scotland and England because of the fans’ passion. It’s unbelievable. 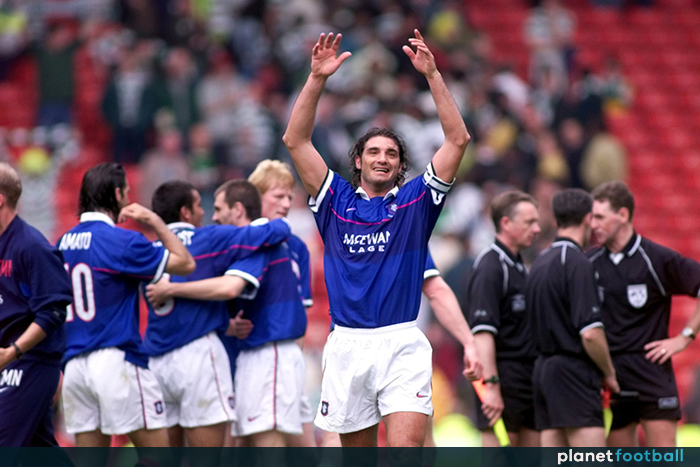 “I didn’t realise at the time (that he was the first Catholic captain of Rangers), I only realised the importance of that years after.

“I always said you don’t need an armband to be captain. I always had a strong character and I was a leader with or without the armband, but now I understand it was not normal for me to be captain.

“I realise that each time I come back to Glasgow and I see the love the fans show to me. I have been a Rangers captain and I am in the history of this big club. That’s special.”

Advocaat failed to build on his successful first two years in charge at Ibrox as Rangers endured a trophyless campaign in 2000-01 before more inconsistent league form in the first half of the following season led to the Dutchman resigning.

Amoruso had seen his own form suffer and had been stripped of the captaincy, but the appointment of Alex McLeish revitalised him as he won the Scottish PFA Players’ Player of the Year award in 2002.

The following season saw the Gers claim another domestic treble, with Amoruso scoring the winning goal in the Scottish Cup final, but it was his last game for the club before he joined Blackburn Rovers for £1.4million in July 2003.

However, after winning nine trophies in six years at Rangers, things did not go so well for Amoruso at Ewood Park. He scored the opening goal on his debut but suffered a knee injury that kept him out for five months and finished the season with only 11 starts in the Premier League.

The man who signed him, Graeme Souness, left shortly into the following season to take the Newcastle United job, and Amoruso would start only four more league games, the next four, under his replacement Mark Hughes.

“It was an experience not so lucky for many reasons, but I loved it anyway,” Amoruso says. 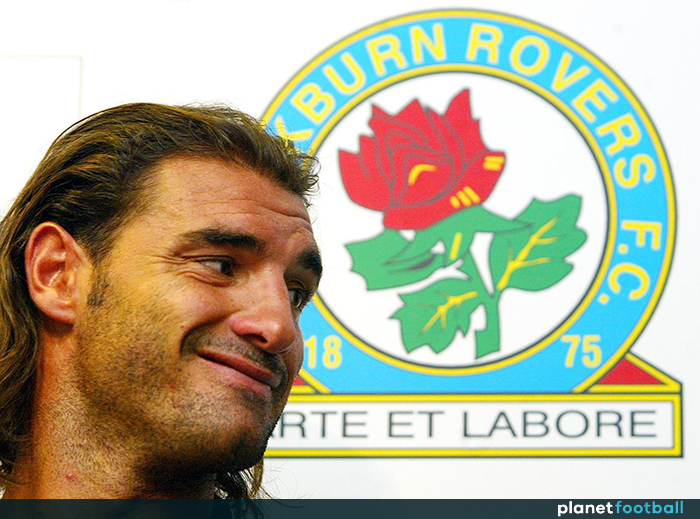 “I had some injuries, but less than the ones they said. The reality is that I had some problems with Mr Hughes who didn’t respect me. He wanted me to stay when I had some interesting offers and then he didn’t let me play.

“During my second year in Blackburn, I could have left in January, but he didn’t let me go and then didn’t consider me for the rest of the season.

“Then at the end of the season, he said again I could leave, but then I decided to remain because the offers were not as interesting as the January ones.

“I didn’t like the way he acted, I think it was at his beginning as a coach and he still had to learn how to talk with the players. But I cannot say anything bad about Blackburn, I still have good memories of the club and the fans.”

Working as a pundit

Amoruso, who now works as a pundit in Italy, still looks out for Rangers’ results and says he would jump at the chance to return to Ibrox as a coach one day.

“I love working in TV because you are still in football, but you are less stressed than a coach or a manager. You have to study a lot, because you have to know everything about clubs, players and so on, but it’s less stressful for sure. 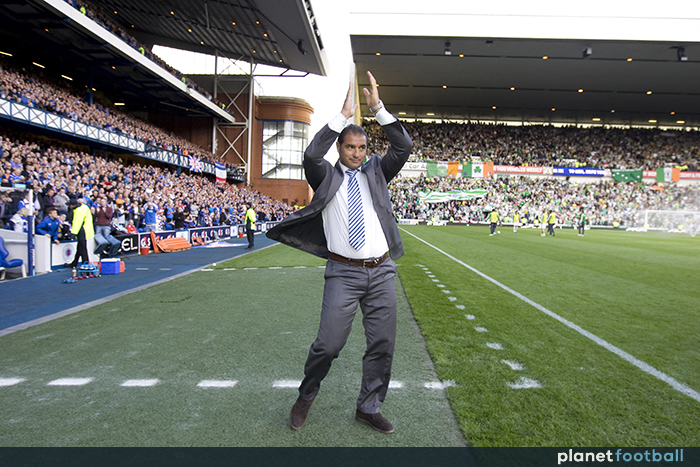 “I always spend at least 4-5 hours reading and studying stats, lines-up and team tactics before a match I am going to commentate on, but after it’s ended you don’t have to think about it again. For a coach or a manager it’s different.

“But when I participate to Squadre da Incubo (Nightmare Teams), a TV format in which I had to work with a very weak team and then try to get them winning, I had special feelings.

“I smelt the pitch, I felt the dressing room atmosphere again. I said to myself that if a good opportunity comes to be a coach, maybe it’s time to take it.

“It would have to be the right opportunity, but I would be very happy to go back to England or Scotland. I spent nine years there so say Great Britain is my second country.

“But it depends on what was proposed. I would not be able to be the manager, as I don’t have the skills, I couldn’t deal with transfer market. I’d like to be the coach, I would like to focus on the team, the training sessions and so on. That’s enough (laughs).”