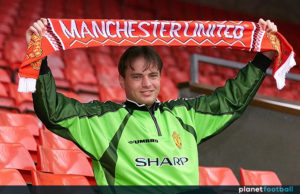 Manchester United’s latest signing Mark Bosnich, who is to replace Peter Schmeichel as United’s goalkeeper, is unveiled at a press conference at Old Trafford. * 4/6/99: On the day of his wedding, Mark was arrested by police on suspicion of robbery. Alleged inciedent occured outside Legs Eleven Nightclub in Birmingham, while he was out celebrating his stag night. Released from custidy in time for wedding. 18/1/2001: Mark Bosnich, who brought his long-running problems at Manchester United to an end and signed for Chelsea on a free transfer. The former Aston Villa keeper was released by United earlier today after being left out of the first team squad for most of the season. Chelsea immediately added the 29-year-old Australian international to their ranks on a three-and-a-half-year contract, but warned him that the “competition” for the number one jersey will be tough.